At approximately 6:05 p.m. on Aug. 1, 2007, the unthinkable happened in Minneapolis, Minnesota. I had worked late that day in downtown Minneapolis and was heading to my car when the streets suddenly filled with fire engines, police cars and ambulances, sirens blaring, heading toward the Mississippi River. The lot I was parked in was about half a mile up from the river road; also next to a fire station. As I watched the vehicles head down toward the river, someone yelled out to a fireman at the station asking what happened. "The I-35W bridge just collapsed!" he shouted back.

Those of us in the parking lot waiting to leave stared in shock toward the Mississippi River, each of us picturing in our minds the horror that just took place during the rush-hour traffic that was traveling across the bridge -- a bridge we had all crossed many times ourselves. Once I got home, I sat in front of my TV, mesmerized by the vision of the now-crumbled bridge, littered with cars, some dangling precariously over the Mississippi River, that had swallowed the main part of the bridge. I simply could not believe what I was seeing or even fathom in my head that this was real.

About an hour after the collapse, as the rescue continued, my cell phone started beeping and I saw that I had about a dozen messages, some of them duplicates of the same number. From the minute the bridge collapsed and during the early stages, cellular phone service in the city was jammed with frantic calls to 911 and relatives and friends looking for loved ones who they thought may be on the bridge. While I did not cross the I-35W bridge to get home from work, friends of mine from out of state and my children who lived out of state were frantically calling to be sure I had not been driving on it that night for other reasons.

The next day, I walked down to the Stone Arch Bridge, which is located upriver from where the collapse had taken place. There were reporters from national news organizations all over the area along with people like me to see the collapse in person, maybe to be able to believe it really happened. When I turned my head to focus on the scene downriver, I let out an audible gasp, and then I began to cry. It was horrifying to see the destruction caused by the collapse. Sadly, 13 people lost their lives that night, 145 people were injured and countless more people's lives change forever.

WHAT CAUSED THE BRIDGE TO COLLAPSE?

A bridge is rated on a scale of 100 to 0. A score below 80 indicates that some extensive repair work may be needed, while a score of 50 or less shows that replacement may be in order. The I-35W bridge was rated at 50 in 2005 by federal inspectors. But while the bridge was rated "structurally deficient," it was deemed to have met "minimum tolerable limits to be left in place as it is," according to National Bridge Inventory inspection data. Still, a steel reinforcement project was planned for the bridge in December 2006.

However, according to various media reports, the project was canceled in January 2007 in favor of "periodic safety inspections" after engineers realized that drilling for the retrofitting would likely weaken the bridge. Weeks after the Aug. 1 collapse, internal MnDOT documents were released in the media noting that bridge officials talked about the possibility of the bridge collapsing and were worried that they might have to condemn it.

After a near-six-month painstaking investigation was performed by the National Transportation Safety Board, it was determined that a design flaw was the likely cause of the collapse, noting that a "too-thin gusset plate" ripped along a line of rivets, placing additional weight on the bridge, "thus contributing to the catastrophic failure."

At the time of the collapse, there was actually another heavily used metro area Mississippi River crossing that scored worse than the I-35W bridge. That was the Lafayette Bridge, one of the longest Mississippi River bridges located in Saint Paul, Minnesota. The main river span of that bridge had been deemed "fracture critical."

According to the Minnesota Department of Transportation, "A fracture critical bridge is one that does not contain any redundant supporting elements. This does not mean that the existing Lafayette bridge was inherently unsafe, only that there is a lack of redundancy in the design." However, because the bridge was nearing the end of its designed life, its age and poor condition put plans in motion to start building a new one in 2011. Those plans were already in place before the I-35W bridge collapse occurred in 2007, with the new bridge construction completed in fall 2015.

The Minneapolis Star Tribune reported recently that Minnesota has "repaired or replaced about 120 bridges in the past decade as part of a special funding program authorized after the I-35W bridge collapse. State leaders set aside $2.5 billion for the program over the past decade, allowing the state to more aggressively tackle a backlog of bridge repairs. It also has left the state with one of the lowest percentage of structurally deficient bridges in the nation."

In the July 24, 2017, article, the Star Tribune said, "The aftermath of the (I-35W) bridge collapse continues to loom large over the Capitol, and it thrust Minnesota to the center of a nationwide debate about transportation spending."

Video footage of the collapse came from one of three security cameras near the southwest corner of the bridge, overlooking the Lower Saint Anthony Falls Lock. These cameras had been in place alongside the Mississippi River in downtown Minneapolis by the Army Corps of Engineers for security purposes. It was the only camera to capture an image of the bridge collapse. Here is a link to the video posted on Wikipedia:

The 10-year anniversary of the horrific I-35W bridge collapse is a stark reminder of the critical need to repair the country's aging infrastructure -- sooner rather than later.

In a news release from the House Agriculture Committee, Chairman Conway said, "America's heartland deserves to be front-and-center as we look to upgrade our aging infrastructure. From rural broadband, to ag research, to transportation -- rural America faces its own set of challenges and considerations and today's hearing highlighted some of those. Take for instance producers in farm country, if they can't get their commodities to market, it's not just rural America that suffers, but also urban America."

At that hearing, the National Grain and Feed Association told Congress that the United States needs to make "more strategic, significant and predictable investments in the U.S. transportation infrastructure or risk having U.S. agriculture lose its competitive export advantage to foreign countries."

Here is a link to all the testimony presented at the hearing: https://agriculture.house.gov/…

Of the 16 categories graded by the ASCE, six are essential to the success of commodity shipments and, in particular, agriculture shipments. Those categories are bridges, which were graded C+, ports C+, railroads B, roads D-, levees D and inland waterways D. Here is a link to the entire report card: http://www.infrastructurereportcard.org/…

According to that report card, in Minnesota alone, 800 (6%) of the 13,355 bridges are structurally deficient, and of the 138,767 miles of public roads in the state, 15% are in poor condition. Minnesota has bridges connecting key roadways for trucks hauling grain within and/or from out of the state to flour mills and river terminals located in the state. Some of the larger bridges connect Minnesota to Wisconsin over rivers, where grain is hauled to one of the many river terminals on the Minnesota and Mississippi River for export. 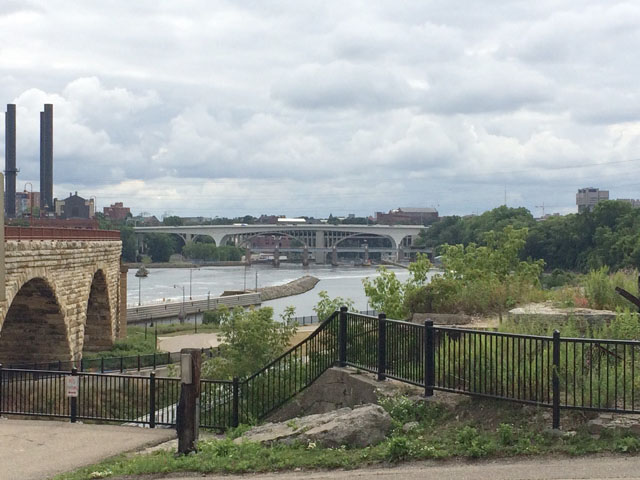