On May 2, flooding from heavy rains inundated farm fields, homes and businesses in Arkansas. The storms caught both livestock and row-crop farmers at a critical time, according to Randy Veach, president of the Arkansas Farm Bureau.

"We have livestock farmers who have lost cattle in the floods, miles of fencing has been washed away and there are many rural roads and bridges that are impassable. And for the row-crop farmers, this will be a big blow, as much of the rice and corn had already been planted," Veach said in a news release on the AFB website.

Andy Jett farms 2,500 acres of rice and soybeans in Clay County, Arkansas, and Ripley County, Missouri, near Success, Arkansas. "With our farm being near the Current River and Little Black River, we have seen our share of floods, but none this severe," he told me on May 8. "We are facing replanting over 400 acres of our 1,400-plus acres of rice and having to rebuild nearly all of the levees that we use to irrigate our rice."

The Current River forms in the southeastern portion of the Missouri Ozarks and flows southeasterly out of the Ozarks into northeastern Arkansas where it becomes a tributary of the Black River, which flows into the White River, which heads to the mouth of the Mississippi River.

"The swiftness of the water and our close proximity to the Ozarks has deposited sand and gravel deposits in our precision-graded fields, a thing we've never seen before," Jett said. "This issue is going to have to be addressed before we can even get in to replant. We are usually finished with rice and planting soybeans around Mother's Day. So we have our work cut out for us the next few weeks."

Jett told me that, before the flood, he and his brother were completely done planting rice and had 90% of their soybean fieldwork finished. "Now, it's gonna be like basically starting over," he said.

On May 10, Jett told me that they're just now getting back in the field. "We are replanting and have a bulldozer pushing sand and gravel out of the fields."

Derek Haigwood, who farms corn, milo and rice in Jackson and Independence counties in northeast Arkansas, told me that the water was 4.5 feet over his levee. "We lost a huge percentage of the crops we had planted," he said. "We will start back replanting today (May 10). Probably all soybeans."

North of Wynne, Arkansas, Will Nicholson's farm sits on the west side of the ridge where he grows cotton, corn and soybeans. "We drain and dry fast," he said. "Our neighbors on the east side are still flooding on the St. Francis Bay, and the water over there is still rising. Waters in the west of the county are going down; the bayou is still high in far west Cross County, I hear. We had to replant 100 acres of beans this week. Guys are re-pulling rice levees instead of planting beans."

"Levees or dikes are little mounds you build in a rice field to hold a flood on the rice. We are rebuilding and reseeding them," said Jett.

Here is a link to the University of Arkansas Extension service weekly rice update on May 12 that addresses re-pulling and an update on the condition of the rice crop: https://goo.gl/…

Joe Christian, secretary and treasurer of the Arkansas Farm Bureau, farms 3,500 acres, about half of it rice and the rest soybeans and corn. He told me, "I farm on the 'forgotten river' in Arkansas, the Cache, which is probably one of the most politicized rivers in America. I still have about half my ground in the Cache River bottoms and used to flood out about one out of seven years. The last five years, I've had some type of flooding that's caused me to lose some crop. In 2011, there was a record flood and this one may break it."

Here is a video taken over northeast Arkansas on May 2: https://www.youtube.com/…. Video is courtesy of the Arkansas Farm Bureau.

The Cache River runs from the southeast Missouri line about 100 miles to the east-central part of the state into the White River below Clarendon, Arkansas. Christian told me that the Cache is said to have the most continuous hardwood trees in the lower 48 states. In the late 1960s, he said, they started dredging the river from where it flows into the White River north because of flooding, and they cleaned out seven miles before getting stopped by State Sen. Dale Bumpers along with Ducks Unlimited and other environmental groups. To this day, the lower Cache has not changed.

"On the upper Cache from a town called Grubbs (which Christian farms just north of), it's been cleaned out and maintained by local Drainage Districts for about 50 miles to the mouth. So the water comes down to Grubbs and has nowhere to go, but it backs up on about 100,000 acres of farmland on a big flood like this one. On the lower Cache, the water just stands on the hardwood timber -- now called the Cache River National Wildlife Refuge -- for much of the year. Now that it's a national refuge, we cannot clean the river out, even though it's killing a lot of the timber because water stands on it too long. So basically, this is a man-made problem that's affecting a lot of people's livelihood that could be solved with some compromise from all sides."

Christian told me that he and other farmers have pinned their hopes for a solution to the Cache on Secretary of Agriculture Sonny Perdue, who visited on May 7 and flew over the devastation. On Friday, May 12, Arkansas Gov. Asa Hutchinson sent a letter to secretary Perdue regarding dates for replanting rice and the state's need for assistance from the U.S. Department of Agriculture in the wake of recent heavy rains and floods. Here is the letter: https://goo.gl/…

REPLANT, ESPECIALLY RICE, MAY NOT BE AN OPTION FOR ALL

Arkansas is the largest rice-producing state in the U.S. However, the current flooding may change that for this year. Christian told me that rice can stand sitting in water, but not for this long. Plus, the insurance replant date of June 10 will likely not be a reality.

"I still have water on my fields as of May 10," said Christian. "It still has to dry out, and that means with no more rain."

Christian said that, so far, he isn't seeing any reaction to the flooding in the rice price, but eventually it may affect the domestic market because many acres may not be replanted.

Arkansas NASS reported that as of May 7, 92% of the state's rice crop had been planted, and 77% of the crop had emerged. NASS posted these comments from some of the Cooperative Extension Service county agents: "Evaluating rice crop after flooding. Some acres will need to be replanted and some acres will go back into soybeans. Levees washed out and will have to be repaired. Had some hail damage to soybeans, corn and cotton. Some cotton will be replanted," noted agent Branon Thiesse, Craighead County.

"We had an excess amount of water in our area this week. Nearly 100% of the producers who border a creek or river had their bottom pastures flooded. Several are waiting to see how much seed they may have lost and how much weed seed was washed in," noted agent Olivia Foster, Carroll County.

"Damage will take months to clean up and get the land back into production," noted agent Darin Henderson, Madison County.

Arkansas Farm Bureau Vice President Rich Hillman is from Lonoke County and farms rice, soybeans and wheat. In an interview posted on the AFB website, he said, "Margins are tight; razor thin." He said when famers have to start over after they've put a crop in and then put in another crop, they probably have to switch commodities. "You're already behind the eight ball before you get started," he said.

Hillman noted that some of the towns that are flooded have been underwater the past three years, and some are still trying to build back resources from 2011. He said that, in some places, water will exceed the historical levels seen in 2011.

"Some of the family farms will not be able to come out of this," said Hillman. "They won't be able to recover from this flood, and that's why it is so devastating." 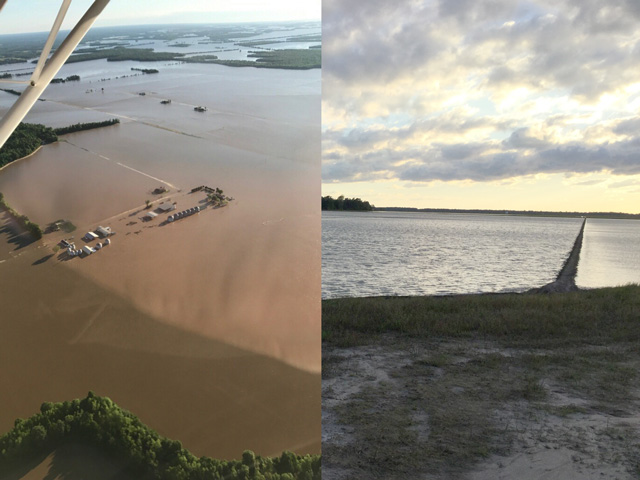