The U.S. Surface Transportation Board (STB) adopted a final rule to establish new regulations requiring all Class I railroads and the Chicago Transportation Coordination Office (CTCO), through its Class I members, to report certain service performance metrics on a weekly, semiannual and occasional basis. Originally, this rule was to be effective on Jan. 29, 2017, with the initial reporting date of Feb. 8, 2017.

On Jan. 20, 2017, a memorandum for the Heads of Executive Departments and Agencies from Reince Priebus, Chief of Staff to President Donald Trump, was issued. Although the Board is an independent regulatory agency, it extended the effective dates of all pending rulemaking in accordance with the memorandum’s request. The request stated that the effective date of rules already published in the Federal Register, but that have not become effective, be postponed for 60 days.

As a result, the final rule to establish the new regulations became effective March 21, 2017, with initial reporting beginning on March 29, 2017.

The STB first addressed the issue of performance data reporting on Oct. 8, 2014, when the board announced it was requiring all Class 1 railroads to publicly file weekly data reports to the STB to "promote industry-wide transparency, accountability and improvements in rail service."

While the initial requirements were prompted by the severe service disruptions seen in the winter of 2013-2014, the timely reporting of standardized service metrics continued to provide significant benefits. On Dec. 30, 2014, the board proposed to make the weekly rail service reports permanent, saying that collection of performance data on a weekly basis would allow continuity of the current reporting and improve their ability to "identify and help resolve future regional or national service disruptions more quickly, should they occur."

Hon. Ann Begeman, STB Acting Chairman, told participants March 19 at the NGFA annual convention in New Orleans, that her priority is "service" and that rail service issues the past few months due to Pacific Northwest weather-related problems did not go unnoticed, saying she had "weekly calls with affected railroads."

Begeman said that she and the other two board members are doing the best they can during the transition in to a new administration. Begeman is the sole Republican on the STB, serving with Immediate Past Chairman Daniel Elliott and Commissioner Debra Miller, both Democratic appointees. President Trump will have an opportunity to nominate two additional Republicans to the STB, which was expanded to five members under the STB Reauthorization Act of 2015.

For now, the performance data rule is the only rule that was scheduled to go into effect. Begeman said the STB is mindful of Trump’s approach to deliberative and cautious regulation, and that "new legislation may ultimately be needed to accomplish the new goals." On hold for now are some hot-button issues that have left the railroad industry at odds with the STB. One is the rail rate case processes that has been under discussion since late 2013. Begeman noted what most shippers are painfully aware of: The current methodology used to challenge freight rail rates is unreasonable, time consuming and extremely costly for a shipper to file.

The other issue still being pursued is reciprocal switching. Reciprocal switching refers to situations in which a Class I railroad that has physical access to a specific shipper’s facility switches traffic from the facility to another railroad that does not have physical access, in exchange for compensation in the form of an access fee/switch charge. On Oct. 26, 2016, the National Grain and Feed Association (NGFA) submitted a 20-page statement strongly commending the STB for proposing "a much-needed modernization of its rules governing reciprocal switching for freight railroads."

Here is a link to the entire NGFA 20 page statement, which also includes proposed changes: https://goo.gl/…

Begeman said the board will not move "too quickly" on the reciprocal switching case and will likely wait until the two new board members are appointed before going forward with it. She noted that this case is complex and difficult and that, “We need to make sure we know what we’re doing so there are no unintended consequences."

Begeman stressed more than once during her presentation that it is important to establish deadlines for cases, saying that "deadlines matter." However, she added, "Congress doesn’t want us to be moving too quickly on some of our more substantive rulemaking proceedings." Hopefully she can convince the new administration that deadlines really do matter, so some of these controversial, important, long-standing cases can be resolved sooner than later. Agriculture shippers have waited long enough. 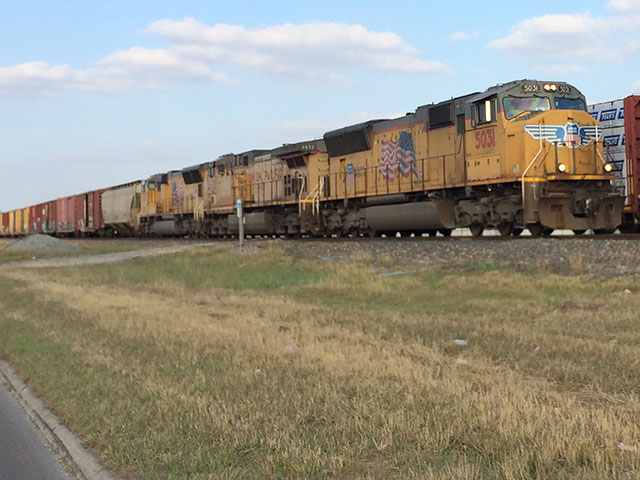