To say logistics are "messy" in parts of the Upper Midwest and Pacific Northwest is an understatement. The Minot Daily news reported that the North Central Research Extension Center just south of Minot, North Dakota, reported a total of 47 inches of snow in four snowfalls since November 2016. Trains were partially buried in high snow drifts near Mobridge, South Dakota, and railroad workers have been busy clearing snow on the tracks throughout the Northern tier since November. On Wednesday, Jan. 11, 2017, Portland, Oregon, was buried in a foot of snow. One week later on Jan. 18, Portland was hit with a crippling ice storm.

In other words, the pain literally spread from North Dakota to the Pacific Northwest over a two-month period, leaving the railroads to keep playing catch-up. Even though the railroads have been working around the clock to keep service from being delayed as little as possible, Mother Nature keeps pushing them back.

The BNSF, UP and CP have been reporting service delays on and off since the Northern portion of the U.S. has been under siege by Mother Nature. The latest one from the BNSF was posted on their website on Jan. 18: "BNSF is currently experiencing an operational impact due to numerous downed trees along a portion of our Fallbridge Subdivision, which runs between Pasco and Vancouver, Washington. Significant freezing rain in this area is causing heavy ice buildup on trees as well as road closures, affecting crew transportation. This location impacts traffic to and from facilities in the Seattle and Portland areas. The estimated time for opening for the main tracks has not been determined. While we have implemented procedures to re-route some trains, customers may experience delays on shipments moving through this corridor."

The UP on Jan. 18 posted this service update, highlighting the areas where they were having problems: "Winter storm Kori is bringing heavy rain and ice to the Pacific Northwest, resulting in multiple service interruptions to our operations between Portland, Oregon; Spokane, Washington; and Pocatello, Idaho. Our ability to respond to the problem areas has been further hampered by road closures around Hinkle and Pendleton, Oregon, and Spokane, Washington. As we work diligently to recover from the most recent service interruptions, our customers could experience a delay of 48 hours, along with interrupted local service in the Hinkle, Pendleton and Nampa, Idaho areas."

Exporters I spoke to on the PNW, told me that there was no rail service on Thursday, Jan. 19, due to snow, ice, landslides and downed trees from the ice. On top of that, one exporter told me that the Columbia River is also full of anchorages for ships to moor while they wait for a place to berth at the assigned elevator. He said because of that traffic jam, there are a number of ships just driving around in circles in the Pacific Ocean, waiting for space to clear in the river so they can come in and park. Another exporter told me that some of the waiting ships have been there for a month. Here is a map of where the Pacific Ocean enters the Columbia River: http://www2.portofportland.com/…

Grain shippers in North Dakota have been fighting a slowdown in logistics for well over a month. Farmers have had trouble getting grain from their bins to the elevators, and elevators have been slow to receive cars. Shuttle loaders on the BNSF told me that shuttle trips per month are behind normal and that some of the shuttles they have received are less than the regular amount of 110 cars. A North Dakota shuttle loader told me that the BNSF was routing some trains around the south routes and then back up, and also heard that the UP was doing the same.

The price for secondary shuttle freight has been moving higher for the past month. There are shippers who had sold grain for January through March and did not have freight locked in. Recent numbers posted have been $2,200 to $2,500 per car for January, and one shipper told me that most bids posted end up trading higher. Much of the increase is due to the weather-related slow service, but also due to shippers who have commitments in January and also some shippers who have piles that are going bad and need to get them picked up and shipped out sooner than later.

He told me that shippers who were able to sell FOB (buyer supplies, freight, and freight cost is reflected in basis paid) don't have to worry about freight; they have to carry the grain until the freight does come, but at least they are avoiding late discounts like the ones who sold "delivered" are facing. Exporters will need to find replacements for the contracted grain if the original shipper can't perform, because they face vessel demurrage and other penalties if grain doesn't make it to waiting ships on time. If they have to "buy in" a customer who is late, it can become very costly for that customer.

The need for corn, wheat and soybeans to fill export contracts becomes critical when shipments are having trouble making it to their destination. China still has soybeans committed to come off the PNW, and Japan and Korea have wheat and corn contracted, among others owed grain as well. When the need becomes great, exporters will increase basis. The basis for corn delivered to the PNW in January hit a high this past week of +140H for first-half January and +135H for last half. Soybean basis hit a high of +115H with the spring wheat basis hovering at +130H.

If you're a farmer and hear those kind of prices, you might think you've hit the jackpot. But sadly, that's not the case. One shuttle loader pointed out to me that the recent increase in secondary freight costs has added at least 62 cents a bushel to their bottom line for now and has cut in to their margins. Most of the secondary freight increase is passed on to the farmer, because one of the major factors influencing basis is transportation costs. Once freight gets cheaper, those costs should weaken, but once the railroads catch up, the basis will weaken too.

An exporter told me that the picture in Portland on Friday was a little better, but there are still a lot of ships to sort through. Shuttle loaders in North Dakota feel that even though the BNSF is working hard at trying to get back to normal, they think it will be well in to February for service to get caught up.

Mother Nature, if you are listening, please be kinder for the rest of the winter. 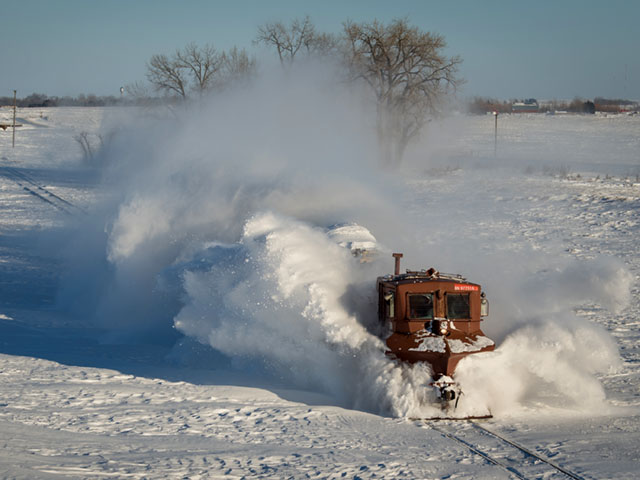