While it is an annual event for the Upper Mississippi River to close in mid-December until spring, the 14-week closure of the Columbia-Snake River locks is an extension of the normal winter closure, as major lock repairs will put the river out of commission.

As winter arrives in the Midwest, the time has come to call an end to the Upper Mississippi River (UMR) shipping season until spring. The U.S. Army Corps of Engineers (USACE) in the St. Paul District said that navigation locks to all navigation would close Dec. 10. All vessels had to be south of Lock and Dam 10, in Guttenberg, Iowa, by then to ensure they were able to make it through the Rock Island District locks prior to scheduled winter maintenance.

"The Corps of Engineers, Rock Island District, is performing maintenance at Locks 15, 16 and 17 this winter and will close these locks Dec. 13. They are expected to reopen March 3, 2017," said the Corps.

The Mississippi River has been a busy highway for grain movement since summer. Basis levels along the entire river system were firm until recently, weakening especially in the UMR terminals above Lock and Dam 17. USDA reported that from June 5 to Sept. 3, total grain down-bound tonnages on the locking portions of the Upper Mississippi, Ohio and Arkansas Rivers surged to an average 1.01 million tons per week.

Corn was the principal agricultural commodity moved, with 63% of the total, while soybeans were the second-highest commodity moved during the period, at 31%. "A similar surge occurred since Oct. 2 with down-bound grain tonnages averaging 1.05 million tons per week," said USDA. "However, soybeans became the main commodity moved, representing 65%, compared to corn with 32% of the late-season total."

"For the week ending Nov. 19, corn shipments on the locking portions of the Upper Mississippi, Ohio and Arkansas Rivers were 585,000 tons, the highest volume in 14 weeks," said USDA. "The corn volume represented 52% of the total grain shipments for the week, while the soybean volume was 47% of the total. Based upon the three-year average during November, soybean shipments typically represent 61% of total tonnages, while corn shipments represent 37%." Barge shippers in the UMR near the St. Paul, Rock Island Districts hurriedly moved corn downriver by the end of November ahead of the winter closure.

While the rivers below the closure are still in operation, there is a concern that the current Southern drought will cause water levels to continue to drop, requiring barges to lighten the amount of grain they can move due to low water levels. On Nov. 19, a tow of 42 grain barges ran aground near Memphis, Tennessee, temporarily closing the river there and stalling traffic heading to the Gulf. As of Dec. 16, the Mississippi River at Memphis was 4.5 feet and falling, and the river at St. Louis was 5.6 feet and falling.

Thomas Russell, co-owner of the Russell Marine Group in New Orleans, told DTN, "Water flows will be restricted in downriver areas as the river freezes in the northern areas. St Louis Harbor in the downriver area of Upper Miss could be impacted. Water levels could drop 2 feet over (the) next week or two. St. Louis Harbor will require monitoring as water levels are low with not much rain predicted. By early January, St. Louis water levels may drop as low as zero on the gauge."

The Pacific Northwest (PNW) will face river shipping disruptions as the USACE shutters the Columbia Snake River System (CSRS) until March 20, 2017, to improve and repair four major locks and dams. According to U.S. Wheat Associates (USW), that river system is a vital transportation link for wheat producers in the states of Idaho, Montana, Oregon and Washington. The economies of these four states rely heavily on the commerce that flows up and down this system. The CSRS is the No. 1 U.S. wheat-export gateway. The deep draft channel supports 46 million tons of cargo each year, valued at $20 billion. The inland system supports more than 9 million tons of cargo.

"Such extended closures are unusual but, as our overseas customers learned during the last extended closure in 2010/11, the entire PNW system is fully capable of ensuring an uninterrupted supply of wheat to export terminals," said U.S. Wheat Associates.

"USW believes the industry will consider every logistical option to keep wheat, especially soft white (SW) wheat, flowing to export elevators. Significant changes will help make this closure more manageable. For example, total export terminal storage capacity on the Columbia River has grown substantially since 2011. The addition of an entirely new terminal, plus the construction of new storage at several others, has increased storage capacity from 564,000 metric tons to 866,000 mt today. The PNW's total up-country grain storage capacity has also grown to 17.3 million metric tons from 16.4 mmt."

A PNW exporter told DTN that exporters prepared for the closure by bringing in loaded barges from the CSRS to their facility and storing them on the water. Buyers prepared for the three-month closure by buying more wheat ahead of the closure and then will load up again when the river reopens in March. The exporter said that there are three very capable rail shuttle shippers now in Washington, and many other rail loaders that can ship from Oregon, Idaho and Washington.

Another PNW exporter said in an interview that the closure may hurt exports a little, and said that South America may be one spot where they lose a little business. Most buyers are going to buy soft white wheat no matter what, but a small majority are price sensitive. The shuttle shippers were trying to add a big premium during the closure, but the futures rally late October caused the premium to drop. SW wheat has already been at a big premium due to the farmer's financial position and ability to store, he added.

The extended lock outage plan is a coordinated effort between Portland and Walla Walla districts, whose goal is to prioritize needed lock repairs along the Columbia and Snake rivers to minimize the impact lock closures have on river users, according to USW. Here is a link to the PNW Waterways Association fact sheet on the Lock closures: http://bit.ly/…. 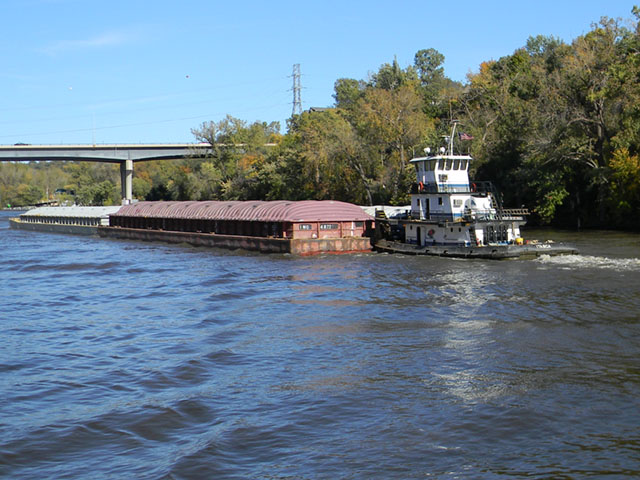