With near-record corn and soybean crops predicted in the U.S. and big crops also expected in Canada, railroad companies in both countries are gearing up for what looks to be another high-volume harvest this fall. The question on many farmers' and shippers' minds likely is: Can the railroads handle it?

The major railroad service disruptions in 2014 are still fresh for many farmers and shippers and likely is part of the reason for their concern about rail movement this fall, as a large harvest looms on the horizon.

In addition to the near-record U.S. harvest for corn and soybean crops estimated by USDA, Statistics Canada said even though some of Canada's crops will produce less than they did in 2015, Canadian farmers are still expecting production of wheat, barley and lentils to increase in 2016.

In the U.S., as of January, BNSF had about 4,800 furloughed due to slowing demand for rail cars by the agriculture sector, but also due to a large decrease in demand for coal cars during that month compared to the prior year.

A source knowledgeable with BNSF told me that the number of furloughed employees is now at about 2,000. He said BNSF has invested over $15 billion the past few years, keeping network infrastructure in optimal condition while also staying ahead of customers' freight service needs. Also, reduced coal and oil traffic has resulted in a significant amount of rail capacity that agriculture can use.

According to the most recent service update, the current shuttle (110-car unit) trips per month (TPM) is at 3.0, and most shippers plan around 2.5 to 2.8 turns. My source told me that BNSF is currently running 130 grain shuttles, a record for this time of year, and they can "scale up" some more if demand warrants.

Secondary shuttle freight costs have soared this past week, adding 25 cents to as high as 59 cents a bushel (at current cost) to already cheap cash prices. On Thursday, shuttle freight rose from the prior day with prices for September split into four weeks at $900/$1,100/$1,400/$1,900 per car. October costs were at $1,750/$2,200 per car split for the month. Remember, these costs are on top of tariff rates by the railroads, which sometimes increase in October. The tariff rate per car for a shuttle from Grand Forks, North Dakota, to the Pacific Northwest is $1.51 per bushel.

Freight costs play a large part in basis determination for an elevator. Note that corn basis in North Dakota, where most shuttles of grain flow to the PNW, ranges from a low of -95U cents to a high of -46U cents, according to DTN's regional average basis on Aug. 26.

Angie Setzer, vice president of grain at Citizens Elevator in Charlotte, Michigan, told me that while they do load cars normally, "we don't have too many concerns when it comes to not being able to ship the needed bushels because we are sitting in one of the few areas affected by drought this year. I know in Iowa there are some concerns, but so far, they have been told the cars will be there when they need them. Much of that, of course, will depend on whether or not harvest happens in a two-week compacted time frame or is spread out a bit. If it happens quickly, I foresee a lot of ground piles in our future until the railroad performs!"

DTN Canadian Grains Analyst Cliff Jamieson said that "Statistics Canada released its first estimates of Canadian crop production on Aug. 23, which showed a large prairie crop is on the way. This report, which is based on July producer surveys, tends to be conservative. The canola crop is pegged at 17 million metric tons, which is 5.5% above the five-year average but well below industry expectations. Canada's all-wheat production (including durum) is estimated at 30.5 million metric tons, only the second time in 25 years that the 30 mmt level has been cracked."

The topic of grain transportation remains one of the top issues for prairie agriculture as the industry looks to what should be a large prairie harvest, added Jamieson. "Both railways, The CP and CN, have made bold statements that they are prepared to move the 2016 crop."

The Canadian Pacific published a letter on their website to federal ministers of transportation and agriculture, stating they are "well-positioned and ready to move this year's western Canadian grain crop, which is forecast to be significantly bigger than the five-year average, to market." (http://goo.gl/…)

Canada's two railroads performed well in the 2015-16 crop year ending July 31, said Jamieson, but the Ag Transport Coalition, made up of prairie commodity groups which are involved with 90% of the grain movement originating from Western Canada, reported that:

-- 88% of the hopper cars ordered over the 2015-16 crop year were spotted in the country for loading in the week wanted;

-- 8% of hopper cars were spotted one week late;

-- 1% of the hopper cars were spotted two weeks late, and;

-- 3% of the cars ordered were outstanding at year-end.

"Prairie producers and industry are not satisfied that enough has been done, with the railroads' failure to move the record crop of 2013-14 at an estimated cost in the billions of dollars in lost sales and producer income still fresh in many minds," said Jamieson.

Jamieson noted that prairie grain transportation was on the agenda when Federal Agriculture Minister Lawrence MacAulay and Saskatchewan MP Ralph Goodale met with 19 agricultural stakeholders in a meeting in Regina this week. "Every effort that can and could be taken will be taken to ensure that the grain is moved more efficiently than it was (in 2013-14)," stated MacAulay. The issue of increased data availability and transparency is one issue that was reported to come up in many of the presentations. The Saskatchewan Association of Rural Municipalities has called for harsher penalties imposed upon railways in the event of failure.

In the U.S., all Class 1 railroads still provide thorough weekly service updates as directed on Oct. 8, 2014, by the Surface Transportation Board. On Dec. 30, 2014, the STB proposed that the weekly service updates become permanent, but would listen to opinions from railroads and shippers. As of this date, there is no final decision on whether to change the current reporting or leave it as is. Also note that in the U.S., there are no penalties for non-performance as there is in Canada.

The success of the railroads both in Canada and the U.S. will indeed be dependent on timing of the harvest and may have different results for different railways. 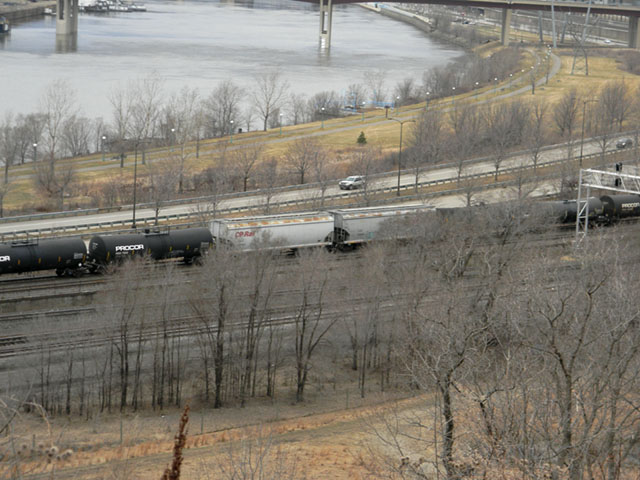