Agriculture product shipping groups are urging the International Longshore and Warehouse Union and Pacific Maritime Association to begin contract negotiations to avoid another labor dispute like the one in late 2014 and early 2015 that disrupted operations at West Coast ports. That dispute affected the container industry, which relies on the West Coast to ship goods, including agricultural products.

On Aug. 11, more than 100 delegates from 30 West Coast ports from San Diego, California, to Bellingham, Washington, who were elected by rank-and -file members of the International Longshore and Warehouse Union (ILWU), convened during the week to consider an employer request to discuss the possibility of an extension to the 2014 to 2019 collective bargaining agreement between the ILWU and the Pacific Maritime Association (PMA), according to a statement on the ILWU website.

That's good news for shippers who fear a repeat of what happened two years ago. In July 2014, a contract agreement between the ILWU and PMA expired. The two sides remained at an impasse from late 2014 to early 2015, resulting in slowdowns at West Coast ports that caused significant disruptions and cost millions of dollars for many industries importing and exporting from the region. Finally, on Feb. 20, 2015, the PMA and ILWU ended the nine-month-long contract dispute, reaching a new five-year contract agreement, which involved 29 ports from San Diego to Seattle. The nine months of stalemate crippled the container industry, which relies on the West Coast to ship their goods, including agriculture products.

Mike Steenhoek, executive director of the Soy Transportation Coalition (STC), told me while soybean and grain exports via container from the West Coast were affected, "the more detrimental to agriculture was the impact on U.S. meat exports, which are exported via refrigerated container and, due to their perishable nature, cannot withstand significant delay along the supply chain. The domestic livestock industry is our most important customer. Any harm absorbed by the livestock industry will be felt by those soybean and grain farmers producing the food the animals consume. The West Coast port disruption was such an example."

Midwest Shippers Association (MSA) Executive Director Bruce Abbe gave DTN a copy of a letter sent Aug. 8 by a coalition of business and container shippers, including MSA and STC, to the heads of the ILWU and PMA urging them to begin negotiations on a new contract/contract extension. You can read the full letter here: http://www.dtn.com/…

"The two party's leaders have made some sounds in the recent past that they may be willing to do this," Abbe said. "ILWU leader said at the JOC conference last spring that if they got a letter requesting that they engage in early negotiations, he would bring it to his members. So it's worth the effort."

"If nothing else, we feel a strong need to keep shippers -- particularly us ag export shippers -- directly pushing where we can to try to prevent another congestion meltdown like a year-and-a-half ago that was so economically damaging to the macro economy all the way down to countless small companies that have banked their business and customer supply chains on having reliable container shipping service," Abbe said. "Right now, the customer shipping community has no direct role, even observatory role, in those labor negotiations. Maybe we should."

The service disruption at the West Coast ports diminished the U.S. reputation as the most reliable exporter in the global marketplace. "It has also been the concern of many industries, including agriculture, that the current detente between the ILWU and the PMA will be temporary -- particularly with the current contract expiring in a few short years. It is therefore welcome news that the ILWU may consider commencing negotiations with the PMA to extend their contract," said Steenhoek.

Steenhoek noted that the West Coast is a prominent and irreplaceable link in our logistics chain, and is not the only option for many industries. "The recent expansion of the Panama Canal, the increased utilization of the Asia to East Coast route via the Suez Canal, and expanded export terminals along the West Coast of Canada have provided needed competitive pressure on the West Coast. Industries and companies, in agriculture and beyond, continue to explore diversifying their supply chains so that fewer eggs are in the West Coast basket. If the ILWU and PMA desire to preserve their position in the global economy, providing greater predictability for those who utilize West Coast ports would be a welcome first step."

"We are encouraged by this development and strongly support any step that will result in a more long-term contract between the two parties," Steenhoek said. "Such a contract extension will provide greater predictability of the supply chain for those industries, including agriculture, that depend upon West Coast ports." 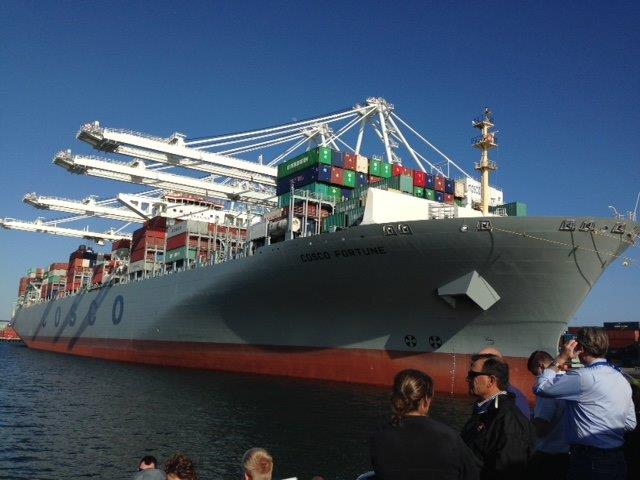