A lot of ink (or maybe electrons) was spilled Thursday regarding USDA's first update of the year for U.S. corn and soybean yields in the latest World Agricultural Supply and Demand Estimates (WASDE) report. These were based heavily on farmer survey results, without the cross check of USDA's own objective yield plots. The agency quit using those in August, but will use them as part of the yield estimating process in September. It is still better data than we had, but we'll know more in 30 days. I would argue that the biggest surprises in the USDA numbers Thursday were on the wheat side, with both U.S. and world wheat ending stocks being squeezed tighter than expected.

I would liken the wheat stocks situation to putting something in a vise. You need to tighten it a little just to hold it in place, i.e., keep prices from going down. Further tightening can distort the item, and even further tightening can sometimes result in breaking what you were trying to fix. Too much tightening in marketing terms results in a short crop/long tail price formation. You get a big spike in prices, but kill off demand and attract production, resulting in an extended period of lower prices to restore market equilibrium.

The vise is clearly tightening. USDA's projected U.S. wheat ending stocks figure of 627 million bushels would put the stocks-to-use ratio at 30.5%. That is the tightest since 2013-14 and would be the fifth year in a row that stocks declined and the fourth year in a row that the stocks-to-use ratio grew tighter. Prices go up as it gets tighter. The U.S. national average cash price for wheat (includes all classes) was $6.87 in 2013-14, which would be $8.03 in current dollar terms, according to the BLS online inflation calculator.

The vise is also tightening on the world level. Projected world ending stocks of 279.06 million metric tons (mmt) would be the smallest since the 2016-17 marketing year, and the global stocks-to-use ratio would be the tightest since 2015-16.

The world wheat ending stocks reduction was dramatic in Thursday's report, down 12.62 mmt from last month. USDA went ahead with major cuts to Canadian production without waiting for Statistics Canada, showing significant drought damage to that crop. This would be the smallest Canadian wheat crop since 2010-11. USDA also cut Russia by a huge 12.5 mmt from last month when the trade had been expecting a more conservative 6-mmt to 7-mmt cut.

In the USDA secretary's briefing, they raised the Russian spring wheat crop 5% from last month to 22 mmt, but reduced the winter wheat crop 21% in a single month to 50.5 mmt. The reduction was not pinned on drought, but rather on an ice-crusting situation in the spring that smothered a chunk of the crop. Australian production was raised 1.5 mmt due to a second year of abundant rainfall, courtesy of La Nina and La Nada weather conditions. The bottom line is that major exporter wheat production dropped 15.1 mmt from last month, and major exporter export shipments are seen declining 5.5 mmt due to lack of supply and higher prices. No change was made to Chinese imports (10 mmt).

While the above would seem to create room for additional U.S. exports and a gain in market share, the WASDE folks didn't change the export estimate for the U.S. Thursday. While not explicitly stated, they are probably waiting on proof of actual sales. U.S. wheat export shipments year to date (since June 1) are only 76% of a year ago, and unshipped sales on the books are only 89% of a year ago. 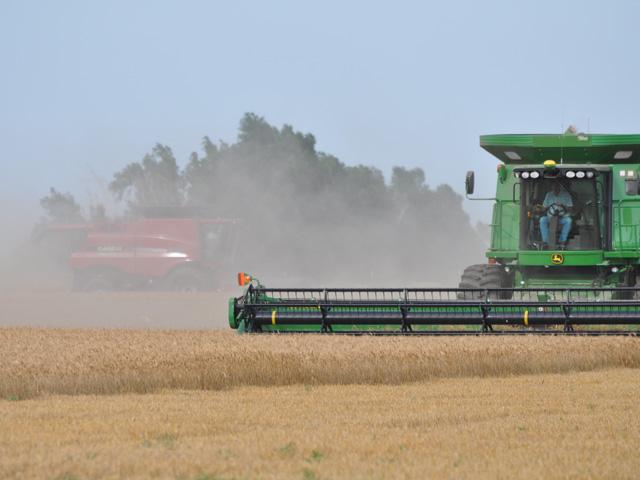