On the Plains of South Dakota, where I'm writing this column, spring looks as far away as it has all winter. At last check, the National Weather Service said the Upper Midwest has 84.9% of its area covered by snow at an average depth of 5.4 inches. Admittedly, this is better than conditions a year ago when the Upper Midwest was covered by an average depth of 12.8 inches. Despite the snow and cold, the February crop insurance pricing period reminds us that spring is just around the corner. Once producers have the ability to look at crop insurance coverage levels each March, the shift in focus to new crop has officially begun. With that shift, we as producers really begin to think about new-crop marketing and whether current prices are considered "high" or "low."

It is with that premise that we thought it would be worthwhile to take a look at some of the seasonal patterns for new-crop corn, soybeans and spring wheat to see what months producers should really be paying attention.

For this study, we are looking at highs and lows made for the current calendar year, not the preceding year, if that is in fact when contract highs or lows were set. So far in 2020, December corn put in the calendar year high at $4.04 3/4 on Jan. 2, 13, 14 and 15. Since those highs were set, December corn has traded decidedly lower with contract lows being set Monday (2/24/2020) and again overnight.

On the other side of the coin, despite witnessing contract lows this week (the week of 2/23/2020), February is not a popular month for setting calendar year lows in December corn either. The lows for the year have never been made in February going back to 1990. With March just around the corner, it is also interesting to note that calendar year lows have never been set in March either. The honor for most calendar year lows for December corn goes to November with seven years since 1990. This is followed by a three-way tie between July, September and December with four a piece. While a run at highs later this year looks likely according to the aforementioned data, a fresh run at contract lows also looks likely given December corn's propensity to set lows later in the year.

Switching gears to soybeans, November soybeans have a calendar year high in 2020 of $9.82 3/4 from back on Jan. 2. Similar to corn, November soybeans do not typically set highs in the month of January, having done so only once, back in 1999. February has witnessed calendar year highs twice, back in 1998 and just last year in 2019. The more popular timeframe to set highs would be May-July, which has witnessed 46% of the highs dating back to 1990.

Based on the historical strength from May through July, odds appear high the $9.82 3/4 highs from January will be revisited later this season.

September Minneapolis spring wheat has a calendar year high of $5.90 back on Jan. 22 and has shed more than 40 cents in the interim. Somewhat troubling to spring wheat producers is the fact September futures have seen their January-September highs set in January six times, February four times and March twice since 1990. Calendar year highs are set between January and March 40% of the time, raising the stakes that the highs have already been set. August has also seen highs set four times, just before the traditional start of harvest in the Northern Plains. Expanding this exercise to include the December Minneapolis contract doesn't yield markedly different conclusions, with January still the most popular month to set highs over the last 30 years at four.

With respect to corn and soybeans, the data overwhelmingly supports another run at the highs put in during the month of January. This stands to reason, as usually prices rally through spring and into the summer months as yield-determining weather is still unfolding.

With the wettest soil conditions across the Midwest on record, another year of large prevented planting acreage is still a possibility. Even with the negative undertow of outside financial markets, our markets are unlikely to accept low volatility throughout the growing season. That said, producers should recognize when good marketing opportunities typically occur and not get lulled into complacency by the herd when they're more sure than ever that "this time is different." 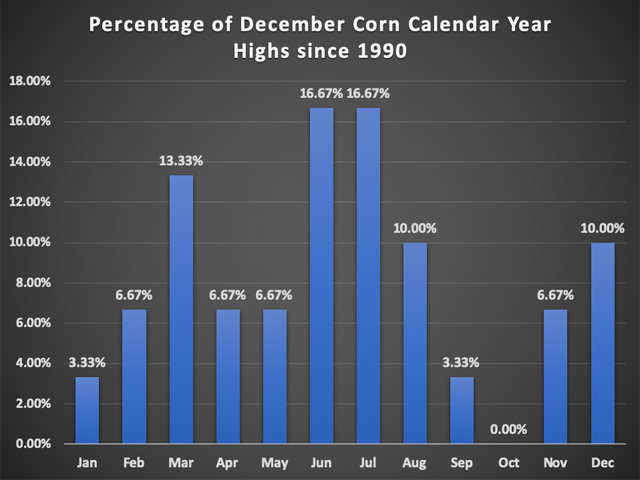