This year will go down in history as one of the most challenging for Midwest producers. Thanks to a persistent wet pattern from spring to winter, producers fought wet fields during planting, heavy moisture during small grain harvest and snowstorms during fall harvest. For some, the season has not ended as harvest drags out in the Upper Midwest and will carry into 2020. One of the largest concerns for producers during winter meetings has been the moisture levels in their fields and what that may mean for spring next year without a massive change in weather patterns. A closer look at the amount of prevented planting acreage and some of the weather records set in 2019 helps put into perspective the challenges waiting in 2020.

Final planted acreage data from the Farm Service Agency (FSA) will be released in January for the 2019-20 growing season. As of Dec. 1, FSA said U.S. producers planted 236.5 million acres of barley, corn, cotton, oats, rice, sorghum, soybeans, sugar beets, sugarcane and wheat. This is the lowest acreage pie on record for the available FSA data that goes back to 2007. The next closest year was 238.7 million acres in 2010 following the incredibly wet fall of 2009.

The largest prevented planting category belonged to corn at 11.4 million acres, which is not a surprise given the favorable economics for electing corn over any other cash crop. This likely led to producers electing corn prevented planting as opposed to a crop that they may have actually been planning to seed, but had lower guaranteed insurance payouts.

For states in the Plains, such the Dakotas and Minnesota, many of those prevented planting acres never allowed producers to get in fields and either seed a cover crop, plant winter wheat or do appropriate tillage work to help dry fields. In some cases, standing water never receded at any point during the growing season.

As most producers will point out, a field that sits completely idle for an entire year loses soil structure and water-holding capacity, hindering its ability to shed water during the following year. A quick look at the finish to the growing season in these areas helps to illustrate just how saturated those prevented planting acres are heading into next season.

The National Oceanic and Atmospheric Administration's (NOAA) National Centers for Environmental Information publishes monthly maps detailing precipitation and temperature ranks relative to history from a national and statewide perspective. For the three-month period of September through November, precipitation rankings were very high for the Upper Midwest. The region including Nebraska, South Dakota, North Dakota, Montana and Wyoming recorded the third wettest period on record going back 125 years. Within that region, North Dakota saw the wettest September-November stretch on record while South Dakota saw the fourth wettest period on record. The region consisting of Iowa, Minnesota, Wisconsin and Michigan did record the wettest September-November on record. Within that region, the wettest September-November periods were seen by Minnesota and Wisconsin with Michigan the second wettest on record and Iowa the fifth wettest on record.

Just for perspective, we also took a look at the six-month period from June through November to see if any records were set for the entirety of the growing season. Once again, the Dakotas did not disappoint with both North and South Dakota seeing the wettest June-November stretch on record. Minnesota, Wisconsin and Michigan all saw the top five wettest growing seasons on record as well. Regardless of how one wants to slice up the growing season, the fact is a record amount of prevented planting acres were enrolled in 2019 and the weather the last three to six months ensured those acres are as saturated as possible heading into winter.

While weather conditions experienced over the last six months can tell us a lot, much more depends on the weather in the next six months as to whether we can count on a repeat of 2019 or a turnaround in fortunes.

At the 2019 DTN Ag Summit in Chicago in early December, DTN Meteorologist Bryce Anderson gave his outlook for the upcoming winter and spring. In general, Anderson is expecting a good chance of below normal temperatures for the last half of winter and into spring. In addition, above normal precipitation is expected over the central United States, especially in the Midwest through the Northern Plains. The wetter signal continues through the spring and raises prospects for a slow start to fieldwork and another round of flood threat.

As Anderson pointed out, there are five components to spring flood threats including: 1) high soil moisture in the fall; 2) frozen ground into early spring; 3) high snowpack; 4) a rapid spring melt; 5) spring rainfall itself. Looking at the five conditions, it is quite clear that the first condition has already been met. If the forecast for above normal precipitation and below normal temperatures bears out, the second, third and fifth conditions could be added to the list.

Both public and private groups have been out in recent weeks with early estimates for 2020-21 planted acreage, as is common this time of year. Most are expecting a sizable portion of 2019's record prevented planting acreage to come back into the fold for the 2020 growing season. While this certainly looks possible for states like Ohio, Illinois and Missouri, it will be a much more daunting challenge for states in the Northern Plains. A total of 10.9 million acres of prevented planting saw a top five wettest fall on record, a conclusion to a growing season no one needed. Without a shift to below normal precipitation and above normal temperatures before spring, it is difficult to see how many of these fields can be brought back into production in 2020.

If forecasters are correct about a cool, wet pattern holding until spring, new crop grain prices will need to carry above average risk premium until fears can be allayed. At the very least, the natural seller in the market -- the farmer -- will remain a hesitant marketer until 2020 proves it isn't going to be a repeat of 2019. 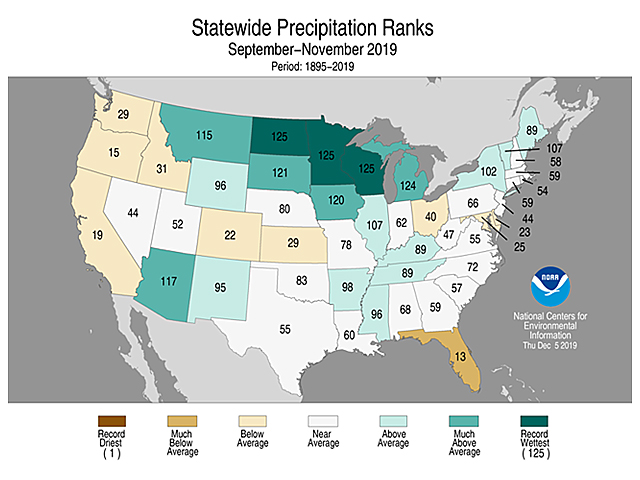