DECATUR, Ill. (DTN) -- If Kellie Blair were to list her skill sets on a job resume, juggling would likely top the list. Wearing many hats is all part of a day's work on the diversified grain and livestock farm she manages with her husband, AJ, near Dayton, Iowa.

This week, Blair adds volunteering to report as one of DTN's View From the Cab farmers to her duties. She joins Ryan Wieck, an Umbarger, Texas, farmer in this regular DTN feature, which will appear throughout the 2021 growing season. The two farmers will be commenting on crop conditions, rural life and a laundry list of other agricultural issues as the season progresses.

Don't you dare apply typical stereotypes to this woman though. As an example, one thing she doesn't do is field meals.

"Not that there's anything wrong with doing that -- but I'm happiest scouting crops or tending cows. When I came to the farm, I had a full-time off-farm job. Now that I'm farming full-time, I still have a full-time job, as a farmer," she said.

The Blairs work hard at working together to complement each other, rather than being defined by roles. Instead, they concentrate on integrating soil conservation and water quality into a system of growing corn, soybeans, alfalfa-hay and small grains that includes cattle as part of the equation. Livestock operations include custom fed pigs, cow/calf pairs and a beef feedlot that finishes custom and owned cattle. This year, they also started a direct beef sales business.

Throw two children, Wyatt (11) and Charlotte (10) into the mix and there aren't many idle moments.

"Everyone on the farm plays a lot of different roles," Blair explained. "This week, I'm concentrating on taking care of morning cattle chores and calving, so that AJ can spray early while winds are low.

"It often makes sense for me to do a lot of the running with the kids, but we swap those responsibilities around, too. And as the children get older, they are pitching in to help with more chores. Having the opportunity to include them as part of the team and teach accountability in this environment is one of the things that makes farming so special," she said.

Blair was raised on a century farm in the Loess Hills of western Iowa. There, she watched her grandfather and father adopt conservation practices to protect those fragile, special soils -- lessons she now refers back to regularly.

"Dad sometimes likes to tease that he thought he raised me smarter than to marry a farmer," she admitted. "But I know he's proud of me and what we are doing."

AJ had graduated with an agribusiness degree from Iowa State University and was assuming responsibilities of the home farm when the two met at a local watering hole. At the time, his parents, Kelly and Rebecca, were involved in a farming enterprise in Bahia, a northeastern state of Brazil. They've since returned to Iowa and are important cogs in helping on the farm, along with two, full-time hired employees.

Married in 2007, Kellie put her own Iowa State University degrees in agronomy and forestry, to work before farming full-time. She worked as an agronomist with The Maschhoffs, creating manure management plans for nearly eight years. She worked another two years as the watershed coordinator for the Boone River Watershed Nutrient Management Initiative Project. Both jobs provided valuable training for working in the farm business, she said.

The couple is the fourth generation to operate this century farm. The flat farmland represents another topographic region known as the Des Moines Lobe -- the last area of the Iowa to be invaded by icy glaciers.

Love may have brought her to Webster County, but it is love for these rich soils and the legacy they represent that has the couple weaving conservation efforts into the fabric of the farm. The Blairs had confidence cover crops could help with soil health benefits but combining them with cows is where they start to really pay off, they figured.

Taking silage from the corn crop allows an earlier window for cover crop seeding. In the fall, cows graze on corn stalks and rotational graze cover crops. In the spring, the regrowth of the cereal rye can be baled before no-tilling soybeans. Monitoring tile lines has proven cover crops are doing their job reducing nitrate and phosphorus loads.

By keeping the ground covered and producing year-round, and utilizing manure from the livestock operations, the couple have put together a system that has allowed them to expand on available acres. "Farming is a slow build business. Land is expensive and renting is competitive, which keeps expansion slow," Blair noted.

"Feeding hogs allowed AJ to come back to the farm. We added cattle to expand another profit opportunity," she said, noting the need to look each farming enterprise as an income stream and each farming partner as an income producer.

The tweaks to their farming system have been measured, but consistent, as they attempt to balance the agronomics with each new practice. Crop rotations now include hay and small grains such as oats, which is marketed to make oat milk and then, the straw baled for use with cattle. They no-till all soybeans and are actively working to move their current strip-till system in corn to no-till.

In 2010, Blair Farm built a mono slope fat cattle finishing barn with an eye toward cattle rate of gain and fertilizer efficiencies. At each end of the barn, a surrounded concrete pad holds manure from the facility and contains potential runoff. Manure nutrient composition tests and regular soil tests from land where it is applied become valuable data to make fertilizer applications.

In 2013, they expanded the operation by adding a cow-calf component to bring more of their own calves into the feedlot with a longer-term goal of selling direct. Angus cows crossed with Simmental and some Charolais is all aimed at putting quality beef on the plate.

"The value in letting the consumer see everything about the calf from the time it was born is pretty exciting," she said.

Finding locker appointments turned out to be more challenging than finding consumers in the COVID-19 climate. But Blair said sales out of the gate have been strong and "seeing our brand on that package has been satisfying."

Juggling starts in earnest this week as calving starts. Delivering and working with baby calves is her favorite job on the farm. The corn is planted and there are few soybeans left to put in the ground. It's been dry, but enough rain has fallen in recent days to calm concerns for now. Rain also allows her a few moments to get caught up on record keeping in the office, one of her least favored chores.

"Having a variety of things that we all do is one of the best things about being a farmer. I really love that," she said.

And, while she doesn't see her life as exciting, talking about what farmers do is critical, Blair said. "If we don't tell our story, who will?"

To see more about Blair Farm, go to: https://blairfarmllc.com/…

To meet Ryan Wieck, the other farmer DTN is profiling this season for our View From the Cab series, go to: https://www.dtnpf.com/… 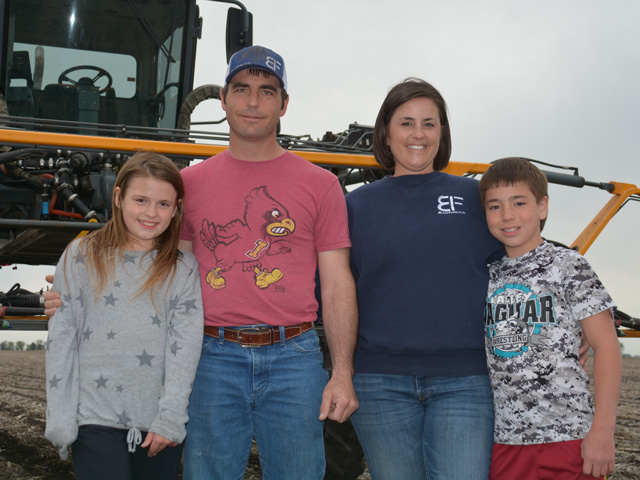