KANSAS CITY, Mo. (DTN) -- As President Joe Biden was signing the Ocean Shipping Reform Act into law Thursday, a group of executives from across the agricultural spectrum spoke about the various bottleneck and stress points in the supply chain that continue to plague the sector from the farm to the ocean carrier.

The various challenges of labor in rural America, transportation and reliance on foreign countries for key inputs were repeated themes as executives from Cargill Protein, John Deere, Dairy Farmers of America, MFA Inc., and the Mid-Kansas Coop each touched on the individual challenges in their businesses during a forum hosted by the Kansas City Agribusiness Council.

The executives touched on growing concerns about inflation, including the problems that have plagued West Coast ports. Biden, in signing the supping bill into law, stressed the legislation is needed to address inflation and ensure exporters such as agricultural shippers can get their products in containers and onto cargo ships.

Cargill exports about 20% of its beef products, so the port situation has been a challenge, especially because freezer space at ports becomes limited when shipping gets backed up, said Jarrod Gillig, president of Cargill Protein North America. While the Biden administration has tried since the beginning of the year to help boost agricultural shipping at California ports, Gillig said it remains slow.

"It's still definitely slower, and we believe there continues to be constrained movement through those ports, and that's what we're seeing whether that is due to container availability or the physical ports," Gillig said.

Michael Lichte, vice president of milk optimization and customer relations for Dairy Farmers of America, added the dairy industry is now reliant on nearly 20% of production going to export, so dairy farmers too are affected by slow service at the West Coast ports. Lichte also pointed to the pandemic shutdown in Shanghai, China, this spring that created a bottleneck for getting containers.

"We couldn't get our products exported overseas," Lichte said.

David Spears, executive vice president for Mid-Kansas Coop, highlighted the opposite problems of getting crop protection chemicals. Spears pointed out people don't appreciate the role China plays in those chemicals, adding roughly 80% of all the ingredients for crop chemicals come from China. Production was cut before last year's Olympics, and a lot of that production in China did not rebound, prompting China to freeze exports.

Spears also noted China, Russia and Ukraine combine for a high percentage of world's phosphate and potash exports. Belarus is part of that mix as well.

"You take that supply out of the market and prices are going to skyrocket," which they have, he said.

For cooperatives, Spears said the pricing of products has changed so much he cannot give costs to producers because they will change by delivery date.

"We can't give a price to the farmers until we have a price," Spears said. "That is really unprecedented for us as far as trying to get product delivered."

The 11,500 or so dairy farmers who are part of Dairy Farmers of America are seeing record milk prices but also record costs. Lichte noted there are farms in California right now that cannot get corn for their cattle.

"Costs are so high that we have got some farmers in the West that are on the verge of bankruptcy," Lichte said.

Lichte added in an interview with DTN that dairies are seeing inflation across the board, which also ties into labor challenges.

For dairy processors, it also is difficult to find truck drivers to haul milk from farms to processing plants. Drivers are shifting over to jobs with the various delivery services.

Each executive spotlighted the problems recruiting workers to rural America. Access to both affordable housing and day care were repeated themes, as well as the need to expand the H-2A guestworker program.

Gillig said Cargill is looking for different solutions to help recruit and keep employees in rural America directly tied to both day care and housing.

"I do believe we have got a constrained labor environment, but I believe employees are looking for something different," Gillig said.

Spears said his cooperative has increasingly turned to H-2A guest workers in recent years and now brings in more than 50 foreign workers for seasonal work. But Spears noted H-2A is archaic in its paperwork and rules and needs an overhaul.

Lichte also touched on H-2A in a brief interview with DTN because the program does not allow for year-round workers. Livestock groups have pushed for years to get Congress to reform the program.

The House passed the Farm Workforce Modernization Act last year that would expand H-2A for three-year work provisions, but the Senate has not taken up the bill so far.

Ben Smith, who focuses on marketing precision agriculture products for John Deere, said every one of Deere's factories has been disrupted because of supply chain issues in one way or another. A product like a sprayer may have thousands of parts with Deere relying on an array of suppliers. If those suppliers can't get a product quickly, it creates a ripple effect.

"He can't deliver the stuff we need because he is waiting on parts," Smith said.

All these delays have led to companies such as Deere revisiting the "just-in-time" inventory deliveries because that system has collapsed, Smith said.

"We are trying to talk strategically on how we deal with inventory going forward," Smith said.

Talking about microchips, Smith said another problem coming out of Russia's invasion of Ukraine is those countries extract and export a few key rare gas products that are considered crucial for producing semi-conductor chips. The lack of chips is now affecting a lot of industries.

"So, when a Russia-Ukraine conflict comes up, there are raw materials that are very critical, and there's not a lot to go around," Smith said. "It just disrupts a lot of things very quickly."

Looking at regulatory fixes, Spears said permitting needs to be accelerated for fertilizer mining operations. "It takes time and lot of money right now," he said.

DTN highlighted the prospect of a new potash mine in Michigan, including the costs and permitting to make it happen. See "Michigan Company Hopes to Build K Mine" here: https://www.dtnpf.com/….

Spears also added one quick fix dealing with the trucking industry involves hours of service. Truckers right now are restricted to 10 hours of driving before required rest times. Spears said a lot of jobs right now have 12 hours of work. If trucking hours of service were bumped to 12 hours, even temporarily, that would be a 20% increase in work productivity.

Chris DeMoss, director of plant foods for MFA Inc., said one area he would like to see the country invest in more is rail infrastructure. While crop production and yields have increased dramatically over the past few decades, rail capacity has not kept up with demand. Rail has taken on far more intermodal shipping as well.

"If we don't have a way to get our goods to market, it doesn't matter," he said. He later added, "There's just not enough rail capacity right now."

DeMoss also touched on long-term concentration and industry consolidation. He pointed out there are now only two Canadian potash providers, for instance.

"We have squeezed everything down to one or two manufacturers, so when there is a disruption, it is a major crisis," he said. 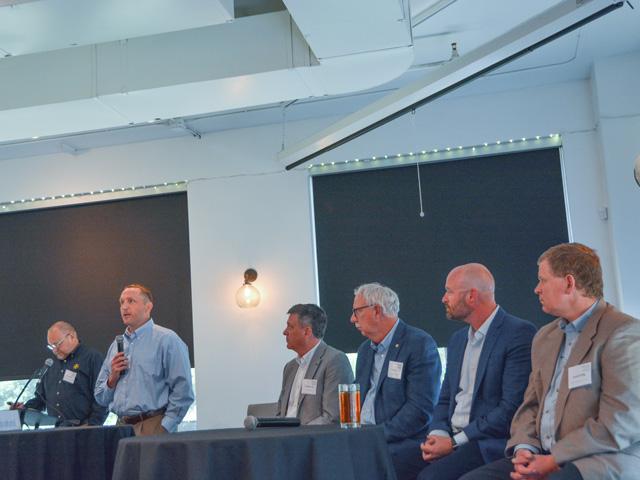