MT. JULIET, Tenn. (DTN) -- Farmers may see a seasonal reprieve in diesel prices as distillers switch from making heating oil to transportation fuel, but there won't be a major correction to prices at the pump until global supply and demand for fuel fall back into alignment.

"We should start to see some relief, hopefully in the next month or so," DTN Lead Analyst Todd Hultman said. "Given that we're in a tight supply situation, it's not like I expect it to drop a dollar, but maybe 50 cents is reasonable."

Seasonality is just one of the six factors DTN uses when analyzing commodity markets. The others are noncommercial and commercial trading positions, trend, price probability and volatility. (DTN provides subscribers with updated market strategies, based on Six Factors analysis, each day for a number of commodities. You can learn more with a free demo of MyDTN, which you can find here: https://www.dtn.com/….)

But fuel markets are inextricable from geopolitical influence, and that's why the trend in the market has been, and will be, up.

Jim McCormick, a co-founder of marketing and consulting firm AgMarket.Net, said supply and demand problems began with the pandemic and were exacerbated by the war in Ukraine. When the pandemic hit, U.S. consumers rapidly cut travel from their lives, causing energy prices to collapse.

"Remember when crude oil actually traded negative at one time because we had an oversupply in the marketplace?" he told DTN. "The energy market responded violently."

Two years later, the economic forces are swinging hard back the other direction as Americans choose to travel over buying more goods.

"Oil industry production has not caught back up," he said, adding there are around 574 active oil rigs in the U.S. now. "So, we've rebounded quite a bit from the lows, but we still have about 100 fewer rigs pumping today than we did pre-pandemic."

OPEC also isn't producing at pre-pandemic levels, Hultman said, and even though the oil cartel announced it was going to increase production by 648,000 barrels per day in July and August, "The catch is the actual production figures from OPEC have not been matching their announcements." (For more on OPEC and correlation to soybean oil, please read "The Need For Soybean Oil Has Never Been Greater" here: https://www.dtnpf.com/….)

"In the big picture, if world oil demand and world oil supply is just 1% to 2% off, it makes a big difference in crude oil prices, and that's also true for diesel," Hultman said, adding that the July heating oil contract, which is the same as ultra-low sulfur diesel, hit its highest level ever earlier this week. Retail diesel prices have hit a series of highs over the past month. (For more, please read: https://www.dtnpf.com/….)

"Until we get a little more in balance, the prices of gas and diesel are probably going to be higher," McCormick said. Demand, which normally would suffer with prices this high, is holding strong and will likely stay that way through the summer driving season.

While the market trend is up, Hultman said noncommercial, or speculative, activity peaked last fall, and is in neutral territory for heating oil, meaning speculation has little impact on the market. Noncommercial traders have a small net-short position, which is understandable given the likelihood of hedging on the board.

"Volatility is up with this bull market that's driven by tight supplies," Hultman said.

Given recent record prices, the price probability is also high. "The insinuation is that long term, there's plenty of incentive to entice producers to supply this market, but in this environment, it's very difficult to do that, especially when you have a war in Ukraine and hostility toward Russian supplies," Hultman said.

McCormick said so much of the uncertainty in the fuel markets is related to the war in Ukraine, and that dynamic could change relatively quickly if, for example, Putin were to surrender, or a coup forced him from power.

"We would encourage producers to keep laying off risk and locking in fuel needs on dips in the market," he said. For those worried they're paying too much, crude oil puts could help buy some downward protection. He recommends crude oil puts because the market has more liquidity than other contracts.

Another thing producers should consider is propane or natural gas needs for drying down the crop this fall.

"It looks like we're setting up for a late crop. The dry-down costs for this crop could be immense, which could really drive up the cost of production for this year's crop." 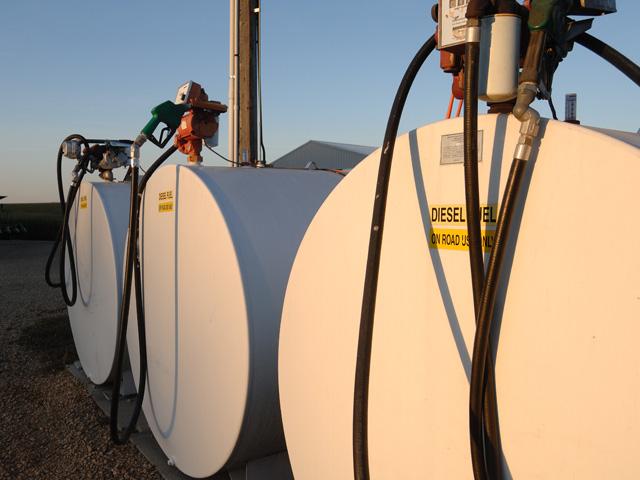