After seeing all the headlines about crude oil prices crashing, I had to do a double take at the receipt I received from my local fuel pump, where I'd just bought diesel at $5.88 per gallon.

That's for farm-dyed (highway tax exempt) No. 1 (winter) diesel in South Dakota, but a look at the AAA statewide averages elsewhere in the Midwest suggest it's not much better anywhere else at the regular fuel pumps: $4.80 in Nebraska, $5.77 in Ohio, $4.87 in Iowa, $5.17 in Illinois. It sure doesn't feel like energy prices are going down.

The benchmark price for West Texas Intermediate crude oil futures has fallen 38% off its June high ($122) and is now lingering at the relatively normal-seeming price of around $78 per barrel. At its lowest point this week, the front-month futures contract had fallen 15% through this month alone.

The normally backwardated oil futures spreads (with March 2023 oil usually worth less than the urgently priced January 2023 contract, for instance) have, in the past week, flipped to a contango structure, with January worth less than February, which is worth less than March. This bearishly implies the market will pay oil owners to delay delivery of their supplies or simply keep the stuff off the depressed market, for now.

The day-to-day bullish or bearish outlook for oil trading relies on several global influences: China -- the world's leading oil importer -- has experienced falling energy demand amid their draconian COVID-19 lockdown policies (bearish), but citizens have finally started to protest those policies (bullish). However, the government has cracked down on those protests and could pursue even harsher lockdowns (bearish). Meanwhile, the European Union is weighing how they might cap the prices of Russian oil to pinch off cash flow from getting into the hands of Vladimir Putin's regime. Whether this happens -- and at what price level -- will affect the substitute prices of Norwegian and Venezuelan and American crude oil too.

There are two big reasons why these oil price fluctuations are of great interest to agricultural producers:

-- Cheap energy could be an opportunity to lock in prices for inputs, especially fuel needs for next year's production. Diesel and natural gas wouldn't even need to be "cheap" by long-term historical standards to make this a tempting idea -- just cheaper than we might expect these products to be next summer. There seems to be more enthusiastic interest in hedging input prices lately after many farmers felt burned by volatile fertilizer prices and other inflated inputs in 2022. It can be a good habit to get into, as long as a farmer also locks in prices for the end product -- the grain -- at roughly the same time. However, the trouble with this temptation right now is that diesel prices aren't actually that cheap! They're not really following oil prices lower. Diesel and crude oil prices don't necessarily move in perfect tandem, but typically, when the raw material (oil) becomes more expensive, the refined product (diesel or gasoline or jet fuel or anything) also becomes more expensive, and vice versa. This time, perhaps because the bearishness for oil is mostly based on international concerns while domestic demand for fuel out of U.S. refineries remains strong, local diesel prices may remain within 10% of their June highs, almost unmoved by the crash in oil prices.

-- Fluctuations in oil prices also affect grain prices. Blessedly, this hasn't been a strongly correlated day-to-day relationship lately while oil futures have been falling. In fact, the opposite effect can be seen -- as low oil prices deter new domestic drilling and oil production, a relative scarcity of supply could keep the ethanol and biodiesel sectors well supported. The oil market is clearly on its own independent wild ride at the moment; but bear in mind that corn and crude oil are fairly well correlated over the long term, if for no other reason than they are both denominated in U.S. dollars and tend to be pressured when the U.S. Dollar Index is strong.

To emphasize just how much of this is out of our control, the oil futures market is also currently acting as a betting pool for whether or not OPEC will announce another production cut after a meeting between its members and allies -- including Russia -- coming on Sunday. So, between Saudi princes, European bureaucrats and protesting Chinese citizens, there is no shortage of wild influences on crude oil prices these days, all of which matter to agricultural producers too, although sometimes not as much as we might like. 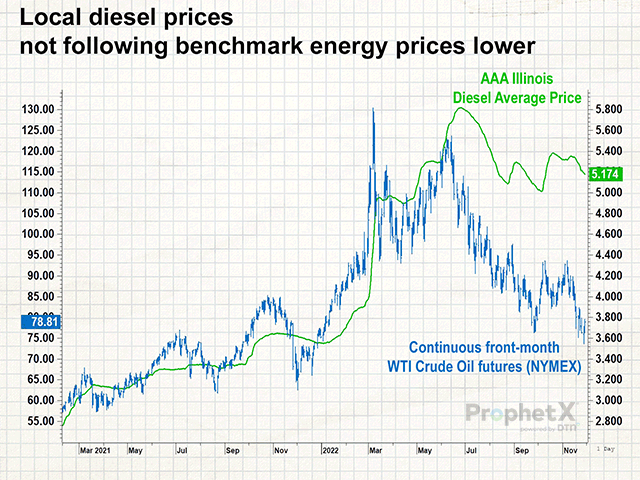