-- While we're a sharply divided country, we're also fairly evenly divided. It's clear from this election that voters haven't weighed in decisively one way or the other. Neither side need fear never winning again. No one need do anything radical.

-- The stock market really wants to go up. All it took was one month of declining inflation to send it soaring a couple days after the election. Imagine what several months of favorable price reports would do for it.

I used the words "arguably hopeful" advisedly, aware that I needed to hedge. Clearly these developments won't inspire hope in everyone.

If you're a strong partisan one way or the other, evenly divided means your side is not triumphing. If you believe it will take a recession to truly tame inflation, you marvel at the market's stupidity.

Hopeful or not, both things are worth pondering.

The urban-rural divide continues to yawn wide, with cities much more likely to vote blue and the countryside red. It's the more mixed areas, such as the suburbs and exurbs, that are keeping the overall division even.

Both parties emerge from the election in a mood of self-reflection. Although the Democrats did better than expected, they're still torn between their progressive and more centrist wings. They still must face a fundamental question: If they do what's necessary to placate their relatively small but hyper-engaged progressive base, how much appeal will they have to everyone else?

The Republicans face a similar question. Beyond just a choice between populism and traditional conservatism, their decision revolves around one man. Will Donald Trump be an asset to the party going forward, or a liability?

This is a particularly tough question because Trump enthusiasts are a big faction of the Republican party. By comparison, only 12% of the Democrats are Progressives. (https://www.dtnpf.com/…) But there are not enough Trump enthusiasts to win elections on their own. And in this latest election, as in 2018 and 2020, Trump's coattails helped some GOP candidates (think J.D. Vance in Ohio) but hurt many others.

One example on the negative side is the Congressional district that embraces Grand Rapids, Michigan, my hometown. It's a traditionally Republican district; the last time a Democrat won the seat was nearly 50 years ago. This time Democrat Hillary Scholten won handily after an assist from Trump.

He intervened in the Republican primary in support of Scholten's eventual opponent, John Gibbs, because the district's Republican incumbent, Peter Meijer, had voted for his impeachment in the wake of the Jan. 6, 2021, storming of the Capitol. Meijer had beaten Scholten by six points in 2020. After Gibbs won the primary, one noted political analyst changed its assessment of the race from "tossup" to "lean Democrat." (https://ballotpedia.org/…)

Both parties know Trump will continue to be a major political force unless someone stops him. The question some Republicans are asking themselves is whether there are enough of them to prevail if they try.

Stock-market investors have questions of their own to ask after stocks made their biggest gains in two-plus years the Thursday of election week. Question One: Is this another head fake?

The market has made several attempts to scramble out of bear-market territory this year. None have lasted. In my view, that's because the market keeps coming up with the wrong answer to Question Two: Is the Federal Reserve really committed to bringing down inflation to 2%?

Perhaps because the Fed was initially slow to realize how serious inflation was becoming -- or perhaps because for years the Fed has been finding reasons to justify easy money -- the market keeps doubting the Fed's seriousness.

Over and over again Fed chair Jay Powell says the Fed will impose a recession on the economy if that's what it takes. The market tanks when he speaks, but later rallies on the slightest hint of inflation easing.

Admittedly, the latest hint was the least slight yet. Inflation in October was 7.7%, down from 8.2% in September, and minus food and energy prices rose 6.3%, below the 6.5% economists expected. (https://www.wsj.com/…)

As promising as that sounds, it didn't justify increases of 7.7% by the NASDAQ, 5.5% by the S & P 500 and 3.7% by the Dow. The first rule of analyzing government economic reports is never read too much into one month's numbers. It's a rule investors routinely break.

See, the developments may really be hopeful. 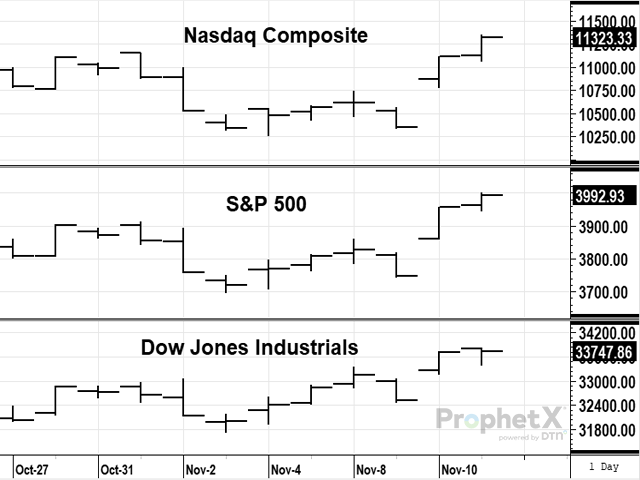