Move over, "Rain makes grain," there's a new catchphrase for the agricultural markets: "Precipitation ends participation." Credit is due to Paul Yeager, producer and host of Market to Market on Iowa PBS, for inventing this alliterative expression, which I'm sure is going to catch on throughout the industry, especially any day when the weather forecasts include something favorable for the Corn Belt and then prices, not so coincidentally, drop by double digits throughout the next trading session.

We are indeed in the throes of a weather market this week. The biggest moves are being made by the nearby futures contracts that represent old-crop corn and soybeans, but the new-crop futures contracts -- the ones that reflect the yield prospects influenced by day-to-day weather forecasts -- are also flailing up or down by double digits during each trading session. It would make sense, then, for us to interpret each price loss of 9 cents or 17 cents or 40 cents as the result of a big selloff in the futures market. It seems like all the previously bullish traders who were once worried about drought for the U.S. corn crop woke up one morning, saw a more favorable rain forecast, and all of a sudden started selling off their positions, closing out their participation in the bullish futures trade. But is that what really happens?

I was so enamored with the "Precipitation ends participation" catchphrase, that I was surprised when I looked into the numbers from recent trading sessions and learned that it wasn't true. There have been days when corn prices were falling, even falling by the maximum limit of 40 cents and, although it was natural to assume this was the result of a big selloff, open interest in the new-crop December corn futures contract was actually rising.

That's clearly what's been happening during some of these recent trading sessions when prices fall yet there's no net selloff in open interest. Last week's Tuesday session was the poster child: a better weather forecast and a limit-down session, but money was apparently flowing into the new-crop corn market, not out of it. Open interest in the December contract rose that day by 2,168 contracts, meaning there was a big flood of short-selling interest overwhelming the volume of any long liquidation from disappointed market bulls.

Note that short sellers could, theoretically, be bona-fide farmer hedgers selling short new-crop futures contracts to lock in a price for physical bushels that will be harvested this fall, made newly confident by the recent bout of rain. However, it doesn't seem like that's who's been doing most of the selling. By the time the weekly Commitments of Traders report included the activity from Tuesday, July 6, the bona-fide "Producer/Merchant/Processor/User" segment of the market had actually closed out over 22,000 of their previous short positions. Instead, it was everyone's favorite villains -- the "Managed Money" segment (hedge funds and Commodity Trading Advisers and other proprietary traders) -- who were pouring new bearish money into the corn market. They accumulated more than 14,000 fresh short positions in the market during the week leading up to July 6 (for all delivery timeframes, not just the December contract) and they simultaneously liquidated 6,860 old long positions, both of which are activities that pressure prices lower.

The takeaway seems to be that the corn market's speculators are perfectly willing to short sell futures contracts when prices are already rich (around $6 per bushel at the start of July) and the weather forecast turns slightly favorable. They may not be looking at the previous stress to the plants from the widespread drought conditions leading up to last week's weather, and they don't seem to be any more worried about yield problems than the USDA is, which so far kept its 2021 U.S. corn yield projection at 179.5 bushels per acre in the July supply and demand table. The rest of us out here in corn country may have a different view, a more bullish view, and that view may or may not ultimately be justified months from now, especially if the precipitation doesn't keep coming. But for now, downward pressure -- from both long liquidation and fresh short selling -- may be capable of outweighing the influence of any market bulls. 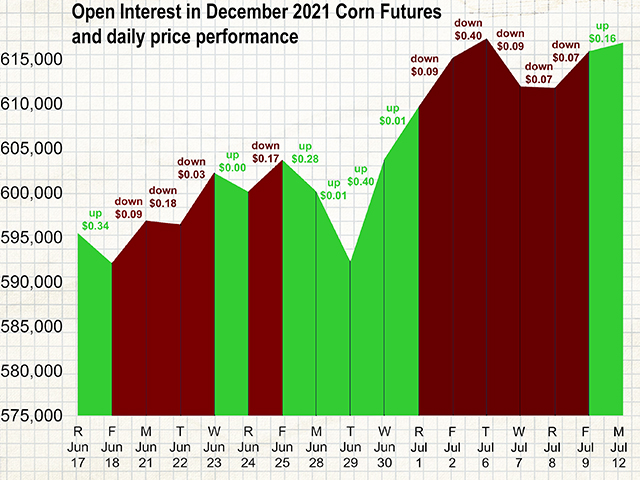