OMAHA (DTN) -- The Environmental Protection Agency would be banned from requiring livestock operations to seek permits or pay fees such as a "cow tax" for methane or other biological livestock emissions under a bill that received a hearing Wednesday, Sept. 7, in the U.S. Senate.

"Passing this legislation would provide livestock producers long-term certainty that their livelihoods would not be compromised by regulatory overreach," Thune said.

EPA has not proposed any regulations or permit fees on greenhouse emissions from livestock operations. Still, the concern that EPA would move in that direction has been a focus of agricultural groups for more than a decade.

Scott VanderWal, president of the South Dakota Farm Bureau and vice president of the American Farm Bureau Federation, told senators the legislation was needed to permanently codify a protection against EPA oversight of livestock emissions that Congress has included in EPA funding bills for more than a decade.

"We do not need to burden our hard-working farmers and ranchers with onerous regulations and costly permit fees," VanderWal told senators.

VanderWal added, "Farmers continue to produce more food, fiber and energy more efficiently than ever before." He said technology has driven up production while lowering agricultural emissions on a per-unit basis. Livestock producers can continue lowering emissions voluntarily through the use of methane digesters or improved feed efficiency, VanderWal said, "not command and control regulation."

VanderWal added, "Every time Congress or an agency puts a regulation on agriculture, it makes it hard for a small family farm to survive."

Contrary to the data from opponents of the beef industry, beef production is directly responsible for only a small fraction of U.S. emissions, VanderWal said. He noted livestock accounts for less than 4% of U.S. emissions, which falls in line with EPA's data on agricultural emissions. Economywide, the U.S. is the world's second-largest emitter of greenhouse gases -- behind only China -- and 4% of U.S. emissions ranks higher than emissions in more than 150 countries globally, according to global emission figures.

Thune's bill has been introduced repeatedly since 2009. Originally, Sen. Chuck Schumer, D-N.Y., now Senate majority leader, was a co-sponsor of the bill. Thune, Schumer and other senators pushed in 2009 to block EPA from regulating livestock emissions after agricultural groups complained about the possibility of a "cow tax."

The "cow tax" came up at the end of the George W. Bush administration when EPA asked federal agencies and stakeholders what would happen to the economy if EPA regulated greenhouse emissions under the Clean Air Act. USDA submitted comments to the Federal Register suggesting if EPA imposed an "emissions permit fee" on livestock, that it could cost as much as $175 per cow and $20 per hog.

Months after USDA's analysis in 2008, the American Farm Bureau Federation came out with a news release, "AFBF Opposes EPA-Proposed Tax on Livestock." AFBF noted at the time, "Steep fees associated with this action would force many producers out of business. The net result would likely be higher consumer costs for milk, beef and pork."

The National Cattlemen's Beef Association also sent out a "Call to Action: Urge EPA to Not Regulate Greenhouse Gases."

AFBF and NCBA both support the bill led by Thune, who has Democratic Sens. Mark Kelly and Kyrsten Sinema from Arizona as co-sponsors, as well as Sen. John Boozman, R-Ark., the ranking member of the Senate Agriculture Committee.

By the end of 2008, there were multiple cable news stories, newspaper articles and op-eds nationally reporting that EPA was looking to impose a tax on cows. Congress has blocked EPA from regulating livestock emissions through an appropriations rider ever since.

Sen. Shelley Capito, R-W.Va., said the year-by-year appropriation provision was a "Band-Aid" and asked VanderWal about the yearly language versus a permanent fix.

"It would provide certainty for us going forward and people would able to concentrate on innovation and technology and be able to work on those things rather than worrying about what the government might do next year,"

Sen. Sheldon Whitehouse, D-R.I., held up a chart arguing that cattle emissions are higher than all of emissions from wildlife. Still, Whitehouse said technology such as digesters could help and the Growing Climate Solutions Act -- now stuck in the House -- would provide technical assistance and incentives from USDA.

Other Democratic senators were more critical over the idea of permanently exempting the livestock industry from emission regulations. Sen. Alex Padilla, D-Calif., pointed to California law, which will work to cut methane emissions from the country's largest dairy state by 40%. Padilla also asked a witness from the Natural Resources Defense Council (NRDC) about permanently exempting livestock emissions.

"I was shocked to learn the livestock sector emits more methane in the United States than the oil and gas sector," John Walke, director of clean air and climate for NRDC. "And the vast majority of that comes from the digestion processes of animals. It's not a problem that we should be kind of permanently codifying into an exemption into law."

Walke added, "If it becomes a permanent exemption from the Clean Air Act, my experience is it's just never going to go away and we're never going to solve this problem."

Markey also said EPA has shown agricultural emissions continue to rise and cited a study this past spring about the global emissions of Brazilian meatpacker JBS. Markey said giving agriculture a "large, industrywide exemption" would lead to oil companies to seek similar emissions.

"I think we should be heading in the opposite direction in terms of what the requirements are going to be on companies that have been allowed to use the air as a large sewer to be sending up these very dangerous emissions," Markey said.

Wednesday's hearing was held with a combination of separate bills dealing with wildfires, smoke emissions from those fires and a bill that would potentially loosen regulations for companies that sell emission override kits for the auto-racing industry. It's unclear if the committee will advance any of the bills to the full Senate floor. 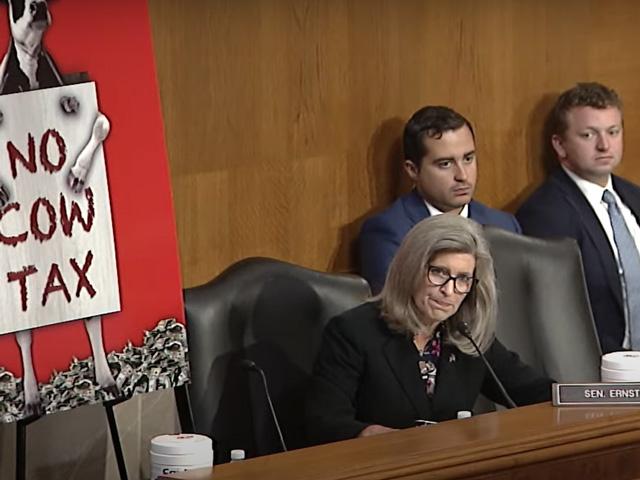