SALINA, Kan. (DTN) -- With temperatures topping 100 degrees Fahrenheit in parts of south-central Kansas on Tuesday, members of the Kansas Soil Health Alliance were traipsing through soybean, cotton and cover-crop fields digging up the plants, residue and soil to see moisture levels and signs of organic activity.

It becomes more of a challenge when the heat cranks up and the area hasn't seen rainfall in more than a month. But those who are farming dryland on fields with cover crops typically feel confident their crops will last longer than their neighbors' fields.

It was the first official crop tour for the Kansas Soil Health Alliance, but several members of the group are also part of No-Till on the Plains. The alliance stresses some key soil health principles, such as limited disturbance of the soil, growing cover crops, keeping living roots, ensuring diversity of crop rotation and integrating livestock into a cropping system.

Everyone has a different mix of cover crops, cash crops and rotations as they search for the best solutions to build carbon in the soil, increase water-holding capacity and ideally scale back commercial chemicals and fertilizer inputs as well.

"The worst thing you can do is not plant a cover crop," said Jimmy Emmons, an Oklahoma cover crop guru who spoke Tuesday as multiple cover-crop/soil health tours gathered for lunch near Yoder, Kansas.

Bret Keeler, who farms near Gypsum, Kansas, talked about soil management on a field growing soybeans. The field has been no-till for eight years, and Keeler uses a variable-rate application as well. Keeler began integrating cover crops into the field partly because of the input demands.

"We were just spending egregious amounts of money on chemicals and not getting much out of it," Keeler said.

Keeler also said he was incentivized to add covers to the field partly because of a $5-per-acre premium credit on crop insurance for planting cover crops before coming in with a cash crop. While Keeler said he has become more selective on applying fertilizer, he also applies more with a diverse rotation.

"We are fertilizing more because we're taking more off the field all of the time," he said.

Ryan Speer, who farms near Sedgwick, Kansas -- closer to Wichita than Salina -- noted his neighbors are starting to see some stress in his area on their corn and cotton acres. He said that with his cover crops, he's using significantly less irrigation water -- about half of his 18-inch allotment. Under irrigation, he will get as much as 90 bushels of soybeans per acre. Still, farming in the sandy soils, Speer said it's difficult to build up organic matter in the soils even with cover crops. Over a decade, he said, organic matter has increased about 1%.

"We don't go backwards much, but we typically don't get the kind of gains we want to see," Speer said.

Speer, though, also raises cotton, a crop that remains small in acreage in Kansas but keeps gaining a bigger foothold. Cotton likes the dry conditions and has a deep tap root. Speer said he anticipates his cotton acres will average four 480-pound bales this year.

"This has the potential to be the best cotton we've ever had," Speer said.

The sandy soils in the area are a challenge, especially if you can't lean on irrigation. Austin Schweizer of Sterling, Kansas, described some of the fields around his farm as a "desert." He pointed to ridges that aren't natural but were created by the dunes during the Dust Bowl. He's integrated cover crops partly to hold down the soil but also to capture moisture. While neighbors see that strategy as giving up moisture to cover crops, Schweizer said rainfalls flow so quickly through the sandy soils it becomes hard to capture otherwise.

"With the cover crops, we pump carbon back into the ground. That's how we get the energy we need," Schweizer said. "The more covers I grow, the more I help the moisture. I have to find a way to use more carbon to hold more water."

Such sandy soils take a long time to build up the organic profile. Standing in a field he took over in 2017, Schweizer said organic matter has gone from 0.3% to more than 1% while he's farmed that ground. "We've moved it, but it's been a slow change," he said.

His soybeans can generate a 56-bushel APH (actual production history), but he still needs a shot of rain to carry that soybean crop into August.

"If we can catch one good rain, we can grow extremely good soybeans here," Schweizer said.

Rainfall has been depleting in Schweizer's area the past three years, and right now, it's about 10 inches below the historical average. Schweizer and others on the tour noted they tend to see larger rainfall events, but then the rainfall shuts down for months at a time afterward.

While some fields have only seen a smattering of rain this summer, the U.S. Drought Monitor only lists parts of some central Kansas counties as D0, abnormally dry, or D1, moderate drought, compared to parts of western Kansas facing D3, extreme drought, and D4, extreme drought.

For those farmers hoping for a shot of rain, the forecast is a mixed bag. DTN Ag Meteorologist John Baranick said a front moving through the area on Wednesday could produce a few isolated showers. There is another hit-or-miss chance with a storm front on Sunday that will provide more isolated showers as well.

"A few showers may linger into Monday, as well, but that will probably be it for next week," Baranick noted. "Amounts being generated by models are very spotty up to about a half-inch in central Kansas. Parts of eastern Kansas may be luckier with showers and more widespread amounts over an inch likely."

Shawn Tiffany operates feed yards around Herington, Kansas, that will finish about 80,000 head a year, but he also farms about 3,600 acres. His goal is to not farm more acres but to farm the ones he has more efficiently. Tiffany grows corn, wheat and sorghum, but began integrating cover crops mainly to graze.

"It was a natural evolution for us to start planting cover crops and grazing those," he said. Cover crops have become a pivotal part of the operation."

Dry conditions since 2019, though, have led to haying the cover crops rather than grazing them.

"I think all of us can agree our weather patterns are much more variable," Tiffany said.

Tiffany pointed to high fuel and input prices as a likely driver for more farmers to look at regenerative soil practices to cut expenses.

"I'm excited about it because pain is a much greater motivation than success is," he said. "That's when true motivation occurs -- when things get painful."

Tiffany said he's reduced his nitrogen use about 25%, though he acknowledged having "some failures," as he has adjusted practices along the way. Regenerative agriculture isn't easy, he added.

"If you think it's getting hard, then you get a wake-up call," he said. 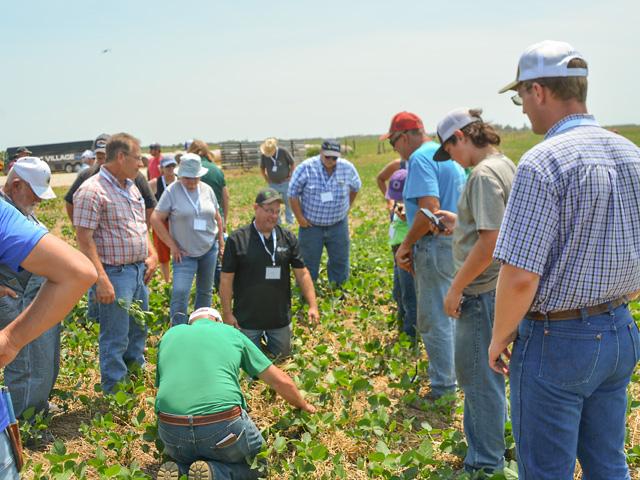