The hefty ear of corn Jason Swede held in his hands is packed with rows of plump, golden kernels. He gestured toward the field it came from.

That's a solid yield range for most anywhere in the Corn Belt. Thing is, Swede's field is nestled in the rolling hills of upstate New York. The second-generation farm is just 65 miles southeast of Niagara Falls, near the small town of Pavilion.

Swede chuckled when asked what he wishes farmers in other parts of the U.S. knew about New York, a state many associate only with the Big Apple and concrete.

"I'd like farmers to know you can grow good corn here," he said.

Swede said corn yields on the farm have steadily improved as the family has fine-tuned its fertility products, rates, placement and application timing. He also credited strip-tillage practices for contributing to increased yields.

The Swede family farm includes Jay, his brother, Ryan, and Gary, their dad. After working several years with an uncle, Gary started his fledgling farm operation in 1975 with less than 100 acres. Today, the nearly 4,000-acre farm is a picture of diversity. The Swedes grow corn, soybeans, wheat and alfalfa, and an array of vegetables, including green peas, green beans, sweet corn and 150 acres of lima beans. Along with the crops, the family has a partnership in a 2,000-cow dairy.

Jay is quick to downplay his involvement in the dairy.

"I don't know anything about cows," he said of the family's Holsteins. His blue eyes crinkled in a smile as he added, "I work the front end and the back end of the dairy, but not the middle."

By front end, Jay referred to the corn silage the family grows to feed its cow herd. The back end provides the foundation for the farm's corn fertility program. The Swedes spread 6,000 to 8,000 gallons of manure per acre across their corn ground each year. While a significant percentage comes from the family's cows, the Swedes also purchase it from other area dairymen at a cost of $20 to $30 per acre. The price paid depends on the nutrient value of the manure, which they test for phosphorus (P), potassium (K) and nitrogen (N).

As it is for most corn growers, nitrogen is the nutrient kingpin for Swede's corn. He said split applications fuel corn growth at key points in the crop's development and also help minimize excess expense, overuse, leeching and, therefore, environmental issues.

"We'd like to use management zones but haven't figured out how to do that yet. With our crop rotation, we may only have field corn two years out of five, so it's difficult to develop consistent yield maps to work with because of the missing years," he explained.

The Swedes make the first of several nitrogen applications in early spring. As they build the strips across their fields for planting purposes, they use their strip tiller to place between 70 and 80 units of N between 6 and 8 inches below the seedbed.

"RTK helps us run the strips and place the seed right over the top of them, so it can access nutrients as quickly as possible," Jay said.

Some of Swede's corn ground also gets 50 pounds of a pop-up fertilizer, 6-24-6, in-furrow. The pop-up contains a micronutrient package to "give the corn a little jump," he said.

After emergence, most of the corn crop receives a sidedressed application of nitrogen. Plus, on some of the corn acres, Swede is evaluating nitrogen applications made just prior to tassel.

Swede said he has refined his nitrogen program over the years, as a result of participating in the National Corn Growers Association (NCGA) National Corn Yield Contest.

"We use our contest corn to look at plant populations, fungicides and some different nitrogen and fertility rates," he said. "It's a good way to test things."

In 2005, the Swedes entered their first NCGA yield contest and won second place nationally in the strip-till category. "That opened our eyes to the potential we had," Jay recalled.

The Swedes have continued their winning ways over the years. Most recently, in 2013, they took second place in the national Class A No-till/Strip-till with 322 bushels from DeKalb DKC63-42.

Jay said it's hard to pin down whether the family's corn-yield increases are primarily a result of fertility management practices or seed genetics. He figured it's likely some combination of both. His dad, Gary, is a DeKalb seed corn dealer, and the family grows a variety of DeKalb hybrids ranging in maturity between 90 and 113 days. Most of the grain corn is in the 96- to 105-day maturity range

The Swedes have used cover crops since they started their farm enterprise. Jay said he likes to plant a cover crop of oats across fields that are going into field corn or sweet corn the following year, and he tops them with a layer of manure. Sometimes, if the oats are headed out in the fall, he conditions them with a tillage pass so they're knocked down a bit. The oats absorb nutrients from the manure and then die off in winter, so they don't have to be terminated in the spring.

"That gives you a good source of organic N to plant into the following year," Jay explained.

Soil tests indicate the Swedes' fields increasingly need sulfur added to them. To address that nutrient, the family purchases all of its nitrogen as 32% N in the fall to take advantage of price discounts. They cut it to 28% N by adding sulfur to it, which helps the nitrogen remain stable and store better.

P and K applications are made based on soil tests. "Most of our potassium goes on in the fall, because that's when we can get on the ground," Jay said. "That also gives it time to break down so it's available for the crop the next spring."

Fertility-wise in 2016, Swede said he plans to make a couple of changes.

For one, he plans to cut back fertilizer use on headlands and shaded areas of fields bordered by woods. "Those areas don't produce well, so we're not going to continue making an investment there," he explained. "That's a simple thing, but it's one step toward varying our fertilizer rates across the fields."

On highly productive ground, Swede plans to try a late application of nitrogen and will dribble 30 to 40 units of N per acre on the ground with drop tubes on the sprayer. "We think that late application at tassel helps keep the plants healthy," he said. "We just want to keep paying attention to that crop, watching it, keeping it healthy. If we could carry that over to all of our fields, we think we could have more yield advantages over all our acres."

Editor's note: From its very first day, the corn seedling is under attack by much of the world around it. Weeds are its biggest threat, stealing yield from the moment the corn seed settles into the bottom of the seed trench. In this series, DTN/The Progressive Farmer looks at why weed control and good early season practices are key to producing high-yielding corn crops. This is the fifth story of a six-part series. 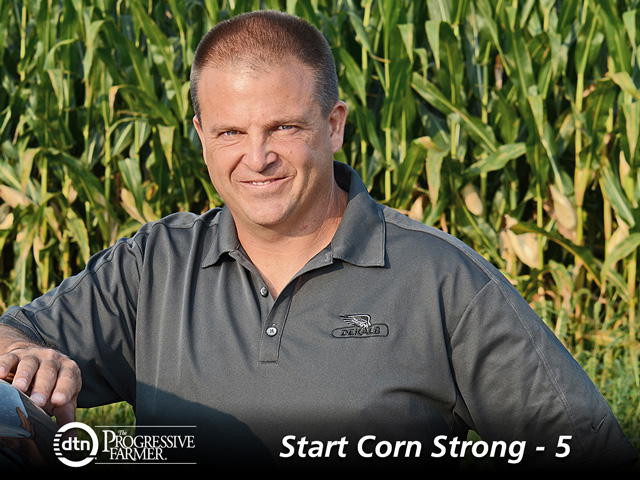