OMAHA (DTN) -- Over the past several years during my presentations at farm shows and producer meetings, there's one topic during the question-and-answer session that brings the crowd to almost complete silence -- climate change.

Whatever a grower's position on the hotly debated issue, the effects of extreme and volatile weather are being felt firsthand by producers. These out-of-the-ordinary events create a sense of "something's going on." They command everyone's attention, so questions are being asked.

Something is indeed going on. In the past 15 years alone, the U.S. has experienced more than 150 weather events with damages of $1 billion or greater. In 2011 and 2012 alone, 25 severe storms, floods, drought, heat waves and wildfires resulted in $188 billion in losses.

Extreme weather continued in 2015, as sustained heavy rain and flooding resulted in several hundred million dollars of damaged crops in the Midwest, Texas and parts of the South. Meanwhile, historic drought in the western U.S. continues, forcing farmers and ranchers who irrigate to make agonizing decisions about which fields or crops get water and which ones don't.

What used to be called "extreme" events now seem to occur as a matter of course. The amount of rain falling in very heavy precipitation events (the heaviest 1% of all precipitation events) has increased during the last 50 years throughout the U.S., as well as in many other parts of the world. Gene Takle, director of the climate science program at Iowa State University, defines a heavy event as rainfall greater than 1.25 inches, because that's the amount that causes runoff.

Climate experts have also observed that snowfall, in general, is decreasing; mountain areas have rain more often than snow, reducing the amount of spring runoff so important to more than two-thirds of the western U.S. And, in the primary row-crop/small-grains regions, seasonal changes widely observed include earlier springs, longer frost-free periods, longer growing seasons and changes to animal, bird and insect habitat.

Behind this backdrop is a global climate that's steadily getting warmer. Not every year is going to be warmer than the previous year. Still, during the past 100 years, the Earth has warmed by an average of about 1.5 degrees Fahrenheit. Some regions surpass that average, especially the northern high latitudes, as well as land areas. Put another way, according to NASA, in the past century alone, the earth's temperature has climbed 0.7 degrees Celsius, roughly 10 times faster than the average rate of ice-age-recovery warming. For the U.S. as a whole, the first decade of the 21st century has seen twice as many record daily high temperatures as record daily low temperatures.

Behind the warming trend is human input. The American Meteorological Society's Climate Change statement notes, "It is clear from extensive scientific evidence that the dominant cause of the rapid change in climate of the past half-century is human-induced increases in the amount of atmospheric greenhouse gases, including carbon dioxide, chlorofluorocarbons, methane and nitrous oxide. The most important of these over the long-term is carbon dioxide, whose concentration in the atmosphere is rising principally as a result of fossil-fuel combustion and deforestation."

A common response to such an assertion is that long-term climate trends occur in cycles and eras -- and that the pronounced warming trend the earth is undergoing is just a phase.

However, computer modeling of earth's climate is increasingly complex. Researchers can now run simulations that separate out the human and natural factors that have contributed to observed warming trends. For the late-20th century, the climate model findings revealed if human factors are removed, the earth's temperatures would have actually taken a cooling track in response to natural variations in volcanic eruptions and solar output.

The U.S. Global Change Research Program's National Climate Assessment report, published in 2014, lists challenges for agriculture during the next 25 years. If they come to pass, they could curtail agriculture's productivity. Those challenges include the following items.

1. Climate disruptions to agricultural production have increased in the past 40 years and are projected to increase during the next 25 years. By mid-century and beyond, these impacts will be increasingly negative on most crops and livestock.

2. Many agricultural regions will experience declines in crop and livestock production from increased stress because of weeds, diseases, insect pests and other climate change-induced stresses.

3. Current loss and degradation of critical agricultural soil and water assets because of increasing extremes in precipitation will continue to challenge both rain-fed and irrigated agriculture unless innovative conservation methods are implemented.

4. The rising incidence of weather extremes will have increasingly negative effects on crop and livestock productivity, because critical thresholds are already being exceeded.

5. Agriculture has been able to adapt to recent climate changes; however, increased innovation is needed to ensure the rate of adaptation of agriculture and the associated socioeconomic system keeps pace with climate change during the next 25 years.

6. Climate change effects on agriculture have consequences for food security, both in the U.S. and globally, through changes in crop yields and food prices, and effects on food processing, storage, transportation and retailing. Adaptation measures can help delay and reduce some of these impacts.

After reviewing these points, it's easy to understand why audiences pay close attention when climate change is brought up for discussion. Producers, indeed, know that something is definitely going on. They are also aware this "something" is commandeering a change on the farm that may include crop- and management-practice choices.

How these decisions are made -- and the success of their implementation -- will go a long way toward keeping agricultural production on a track of plenty, despite the furious outbursts of Mother Nature. 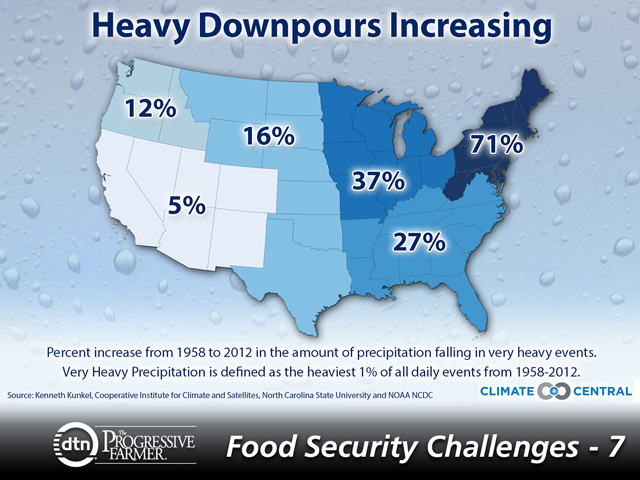