ANKENY, Iowa (DTN) -- Baseball fans were treated to a spectacular orange-red sky at sunset and views of lush, green corn and soybean fields stretching to the horizon during the recent "Field of Dreams" baseball game.

I was awestruck, even as an Iowan who isn't surprised by the state's beauty. Just think of the impression the sights left on the 8,000 fans that packed the Major League Baseball (MLB) stadium near Dyersville, Iowa, to watch the Chicago White Sox play the New York Yankees next to the iconic "Field of Dreams" movie site. Not to mention the impression left on nearly 6 million people watching at home, the largest MLB regular-season TV audience in 16 years, according to Nielsen ratings.

The aerial views of the stadium surrounded by DeKalb corn and the Iowa landscape were stunning. There were no skyscrapers or city lights, just natural beauty.

To me, in some respects, the first MLB game in Iowa on Aug. 12 was secondary. I watched because of my love for the 1989 "Field of Dreams" movie. And, more importantly, to see agriculture and the Midwest be in the national spotlight.

Days after the game, the long-lasting positive effects the game will have on agriculture, corn growers and the Midwest are still top of mind for Iowa grain farmer Chris Edgington. He's first vice president of the National Corn Growers Association (NCGA), which joined forces with the Iowa Corn Promotion Board and Illinois Corn Marketing Board, to partner with MLB to host the event.

"It was a fantastic opportunity to put corn and agriculture on a national stage," Edgington, who watched the game several rows up behind home plate, told DTN. "The positives of this will last a long time."

Edgington couldn't comment on how much NCGA paid to be part of the event for contractual reasons, but he said it's well worth it. Here's a few examples:

-- During the FOX broadcast, announcers raved several times about the beauty of the region and corn surrounding the field. Video footage of sweeping vistas of farmland was repeatedly shown going in and coming out of commercial breaks.

-- Yankee star right fielder Aaron Judge told reporters that players are typically glued to their phones on the way to a game. But on the bus ride to rural Dyersville, he said players -- especially those from other countries and from big cities -- were glued to the windows to "catch the scenery" of wide-open expanses of farmland and crops. "Everyone is excited about the experience," Judge told reporters.

-- A White Sox player was caught on camera shucking an ear of corn, tasting it and quickly spitting it out. FOX announcer Joe Buck said, "That's feed corn, right?" His broadcast partner said, "I think so." A visual lesson for non-farmers that the nearly 93 million acres of field corn planted in the U.S. this year is not sweet corn.

-- Facts about Iowa agriculture being the top corn and pig producer in the nation were shown during the telecast.

Edgington, who farms near St. Ansgar in the north-central part of the state, said MLB employees and many out-of-state fans asked him and other farmers how corn rows are planted so straight and how plants are spaced almost perfectly apart, along with other production questions. Edgington briefly explained that technology, such as using GPS and auto steer, plays a big role in modern agriculture.

"We (NCGA and commodity groups) work to educate consumers and policymakers on our products ... and production," Edgington said, noting non-farmers are often the ones passing regulations pertaining to farming. "Agriculture looked good."

Caretakers of the corn near the stadium made sure it was picture-perfect. Edgington and others said some was hand-planted, corn was watered and not a weed was found. A viscous windstorm a couple days before the game lodged or snapped some plants by the stadium. Plastic stakes were used to straighten damaged plants.

Before the game started, "Field of Dreams" star Kevin Costner "magically" emerged from the corn in right field, much like "Shoeless" Joe Jackson and other ghost players did in the movie. With the iconic movie score playing, Costner slowly walked across the perfectly manicured outfield grass, taking dramatic pauses along the way. Soon, the rest of the White Sox and Yankee players and coaches appeared from the corn, some with ears in their back pockets.

The event, location and corn were "perfect," Costner eloquently said during his pre-game speech. In a homerun fest, the White Sox beat the Yankees in dramatic fashion in the bottom of the ninth inning with a two-run, walk-off dinger. The real winner, though, was agriculture and the Midwest.

I asked Iowa Soybean Association CEO Kirk Leeds, who attended the game, about its importance to agriculture. "It was a great way for people to get back in touch with the land, agriculture and rural America," he said.

Despite the event being delayed a year due to the COVID-19 pandemic and Leeds' beloved Chicago Cubs not playing, the rabid baseball fan had to be there. A lottery was held for Iowans for the chance to buy two tickets at a face value of $375 or $425 each. Leeds' entire family signed up for the ticket lottery. His son was picked but couldn't go to the game. He gave the tickets to his mom and dad.

Leeds regularly jokes that "corn is a great rotational crop" with soybeans in Iowa. But at the Field of Dreams, where corn is synonymous with the movie, he even admitted that corn is king. Fans walked a quarter mile through corn to get to the MLB stadium.

"I would love to see soybeans out there, but it's pretty hard to walk through a soybean field without being seen," Leeds said, referring to players in the movie and before the actual game "magically" emerging from the corn.

While sitting in the left field bleachers of the MLB stadium, Leeds chatted with Yankee fans that made the trek to Iowa from New York City and others from across the country who purchased tickets on the secondary market. Some tickets, according to published reports, went for several thousand dollars.

Even though fans wanted to be a part of history and see movie and baseball stars, Leeds said fans that don't farm or live in the country were curious about agriculture.

"I talked about how important agriculture is to our economy, the number of farmers in Iowa and how Iowa helps feed the world by producing the most corn, pork and eggs in the nation and the second-most soybeans," Leeds said. "I wouldn't say they were oblivious, but pretty close."

In the opening scene of the movie, Costner's character, Ray Kinsella, plows under part of his corn to the bewilderment of neighbors to build a baseball field at the behest of a pesky voice who says, "If you build it, he will come."

At first, the ghosts of baseball greats appeared from the corn to play ball again. At the end of the movie, the true "he" did come, Kinsella's father. The two played catch that helped ease the pain of a strained relationship.

Toward the end of the movie, with Ray being pressured to sell the farm due to foreclosure proceedings, writer Terence Mann played by James Earl Jones urged him not to sell. Jones famously said, "People will most definitely come" to the baseball field in the corn and pay for the experience. "They will come to Iowa for reasons they can't even fathom."

More than 30 years after the movie, people certainly did come. They saw a spectacular sunset, beautiful crops and a great baseball game. And they learned about agriculture. MLB announced the Chicago Cubs will play the Cincinnati Reds at the field next year.

"I can imagine more educational opportunities. Maybe farm tours and talks with local farmers," Edgington said. "But if someone was disappointed with the outcome of the (first game), I don't know what their expectations were." 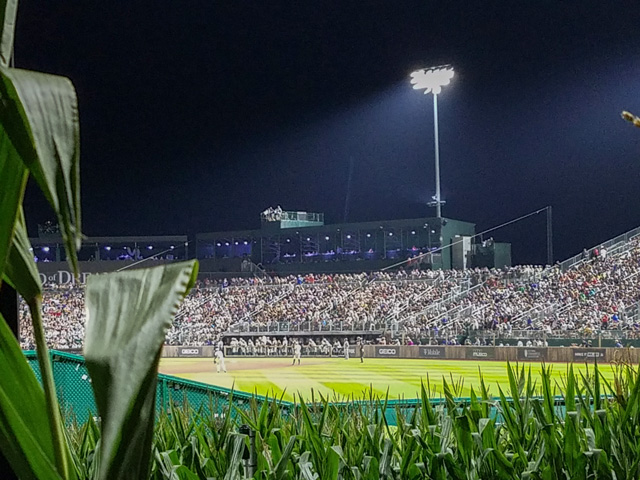