OMAHA (DTN) -- The U.S. Environmental Protection Agency has placed a 90-day hold on a rule set to take effect Tuesday in response to the tragic April 2013 ammonium nitrate explosion at West Fertilizer Co. in West, Texas, as the agency considers writing a new rule.

On Aug. 1, 2013, President Barack Obama issued an executive order designed to improve safety and security at chemical facilities such as the facility in Texas.

"The coalition shares EPA's goal of promoting process safety," the groups wrote in the petition. "EPA's data shows that the pre-existing RMP regulation promoted safety, with a significant decline in the rate of accidental releases and incidents in the last 20 years. Unfortunately, the final rule undermines safety, creates significant security risks, and does nothing to further prevent criminal acts that threaten facilities, such as the sabotage that led to the tragedy in West, Texas.

"The coalition submits this petition on the grounds that the final rule was procedurally deficient so as to deprive commenters of effective notice and opportunity to comment."

What's more, the groups said, the agency introduced new provisions in the final rule "for which commenters had no notice and which were not a logical outgrowth from what was proposed."

The coalition said the final rule poses a potential national security risk in that it "compels facilities to make available sensitive information about covered processes that could expose vulnerabilities to terrorists and others who may target refineries, chemical plants and other facilities."

In a final rule issued Monday, http://bit.ly/…, EPA not only delayed the effective date to June 19, but announced it would undertake new rulemaking on the issue.

"We will prepare a notice of proposed rulemaking in the near future that will provide the RMP coalition and the public an opportunity to comment on the issues raised in the petition that meet the standard of CAA section 307(d)(7)(B) as well as any other matter we believe will benefit from additional comment," the notice said.

In May 2016, officials with the Bureau of Alcohol, Tobacco, Firearms and Explosives announced a fire had been set intentionally, leading to the ammonium nitrate explosion on April 17, 2013, in West, Texas.

A large explosion occurred, causing 15 deaths -- including 12 who were first-responders -- injuring 300 people and destroying more than 500 homes. The explosion left a crater about 93 feet wide and 12 feet deep.

The explosion, which destroyed numerous homes, a nursing home and school near the facility, occurred when 28 to 34 tons of about 60 tons of ammonium nitrate ignited in the warehouse on the West Fertilizer Co. property.

Investigators had been zeroing in on three possible causes of the fire at West Fertilizer: a potentially faulty 120-volt electrical system on the property, a golf cart that could have accidentally caught fire, or that the fire was intentionally started.

During the three years since the explosion, a Texas Fire Marshal investigation outlined a number of mistakes made by volunteers who arrived on the scene when the fire started.

Federal agencies investigating the disaster pointed to flaws in the way ammonium nitrate was stored at the facility.

The blast caused the fertilizer industry to take a closer look at ammonium nitrate and other chemical safety issues. 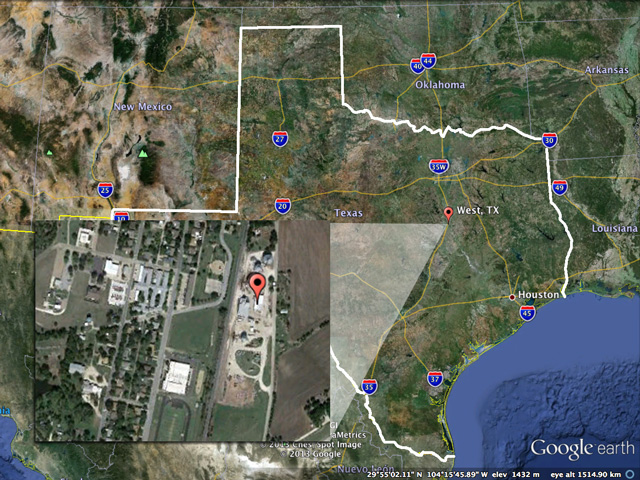