DECATUR, ILLINOIS (DTN) -- The hungry crowd was already restless waiting for their fast food fix at the local burger joint. No drive-up convenience here. You place an order; get a number and wait while soaking up scents of frying fat mingled with the juices of parking lot asphalt sizzling in the summer sun.

It was when the lady next to me started helicoptering her arms and shouting "bees" that things really got heated. Famished folks lurched indecisively -- torn between flight and holding the line for the full meal deal.

"They aren't bees. They are flies," I said, instinctively flinching, remembering those elbow jabs my children used to throw when I imparted entomology or agricultural knowledge on the general public. "They can't sting you," I assured the woman. "They don't even have stingers. They just like body odor and sweat." Oops ... too much information.

I'd just read a release by Purdue University entomologists Christian Krupke and Larry Bledsoe and was full of juicy details. Their bulletin told of farmer reports of worms, or maggots, crawling over spray equipment. Yum. Turns out these particular maggots are actually the larvae of the not-so-undesirable syrphid fly or "hover fly."

Hover flies and their larvae are routinely misidentified. They are harmless and start life as worms that feed on surplus corn pollen. Each corn plant produces much more pollen than it actually needs and these larvae dutifully clean up the excess. Look down in the leaf axils and other areas where pollen collects on the corn plant and you can find them merrily munching away.

The Purdue entomologists assured growers that these larvae (and the flies that hatch from them) are not pests. They aren't actually considered beneficial insects either -- although the larvae do apparently eat aphids and other soft bodied insects.

"We have also received, and experienced first-hand, additional reports of large numbers of hover flies in and around cornfields," the release stated. "These are the adult form of the maggots, and if reports this week are any indication, there are many more to come." Hover flies are also sometimes called a corn fly or flower fly -- adults dine on flower nectar and pollen and some species are considered pollinators.

Hover flies mimic bee and wasps in that they have the orange, black or yellow bands on their bodies. Entomologists maintain this is a type of camouflage. If insect predators think hover flies are big-time bad guys, they might not mess with them.

Hover flies linger in mid-air, much like hummingbirds. They are smaller than yellow jackets, although apparently there are many different species and some are larger than others. Yes, they are often annoying as they hang about when we are hot and sweaty and more apt to be irritable anyway.

There is an old saying that goes: Two wings fun; four wings run. Hover flies have one set of wings. Bees and wasps have two. Just don't eat and run (just kidding).

Krupke and Bledsoe said they aren't really sure why hover fly numbers have spiked in recent years. The lady having a meltdown at the hamburger hangout asked me that same question as she continued to wave her hands about.

"You live in the middle of a vast sea of corn," I said, using my own hands in a more worldly gesture. "Good year for corn. Good year for hover flies." She looked skeptical.

"I made that last part up," I admitted. That, she allowed, was probably the first truthful thing she'd heard all day. 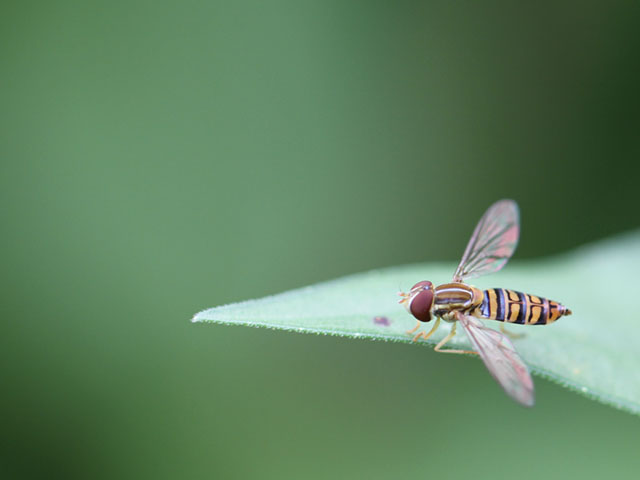