Editor's Note: Farm shops have evolved to become multifunctional spaces to be used year-round by the entire family. To highlight these spaces, each year, DTN/Progressive Farmer features them as part of the America's Best Shops series. This is the second featured shop of this year's series.

Tracy especially wants them to know that the farm shop he started building in 2016 was built to last. "I wanted to do it right the first time so that my grandkids can say, 'Grandpa knew what he was doing; he did it right,'" Tracy said.

The shop that Tracy built is large by northwest Missouri standards. At 66 by 96 feet with 18-foot sidewalls, it can hold three semis simultaneously. It's wide enough that a combine with 35-foot-wide bean head fits comfortably through the door, and it's long enough that a tractor with a 24-row planter in transport mode can slide right in.

With the shop itself, Tracy's Morton building has a 30- by 36-foot space for office, kitchen, bathroom, parts room and conference, which all have been roughed in.

Tracy's shop replaces ... well, nothing, really. When he and his wife, Nicki, bought the 740-acre place fresh out of college, it had a solid farmhouse, a chicken house and not much in the way of outbuildings. There was no shop. For the first few years, Tracy had to do machinery repairs and modifications on nature's timetable -- when it wasn't raining too hard or wasn't so cold even a hardy farmer couldn't long endure it. Tracy started thinking about a new shop even before he signed the papers for the farm. But the most important thing at the time was to get a good start in farming.

"My folks always told me: 'You buy a farm based on the dirt, not the house or the outbuildings. They come later,'" Tracy said. Being a practical farmer, a shop would come before a better house.

The first plan was to build a shop behind the existing house. But as Tracy assessed his future needs, he realized there wasn't enough room. So, he looked up the hill a few hundred yards and began to make plans in earnest. He investigated building companies, looked in farm magazines for shop ideas and visited as many farm shops as he could.

He eventually chose Morton Buildings as his builder, in part because of the quality he saw, in part because he liked the paint selection. "I wanted something with a top-of-the-line look," he said. "I am very much an eye-appeal guy."

His propane-fed boiler and tube system achieved that purpose. "We can keep it at 65 degrees Fahrenheit and burn very little propane, (about) 800 to 1,200 gallons for the entire winter," Tracy said.

Having in-floor heat rather than forced air influenced his decision to scale the main door to 40 by 16 feet. "We can open that big door to unload a semi of seed, and within 15 minutes after we close the door, it's back to 65 degrees F. Not like forced air, where you lose all your heat when you open a door. There are no hot spots, no cold spots, just very, very consistent heat," Tracy said

Adding to the shed's productive ambiance are multiple windows. Tracy chose large, 4-by-4-foot windows with screens for airflow and mullions for appearance.

Both the main door and the 30-by-16-foot east door have a line of windows at eye height giving him a view of the outside. "If you don't have windows, your shop is gloomy," Tracy said.

And the house? Tracy has plans for a new house near his shop. That's something else his grandkids will inherit.

Watch a video about the shop at: https://www.dtnpf.com/…,

Is your shop one of the best in the country, or have you recently remodeled? If you have, tell us about it. Send us a brief summary of your shop along with a few photos. If selected, you will receive $500 and your shop will be featured in a future issue of Progressive Farmer magazine and on www.dtpf.com. Email dan.miller@dtn.com or send to: Dan Miller, Senior Editor, DTN/Progressive Farmer, 2204 Lakeshore Dr. Suite 415, Birmingham, AL 35209. 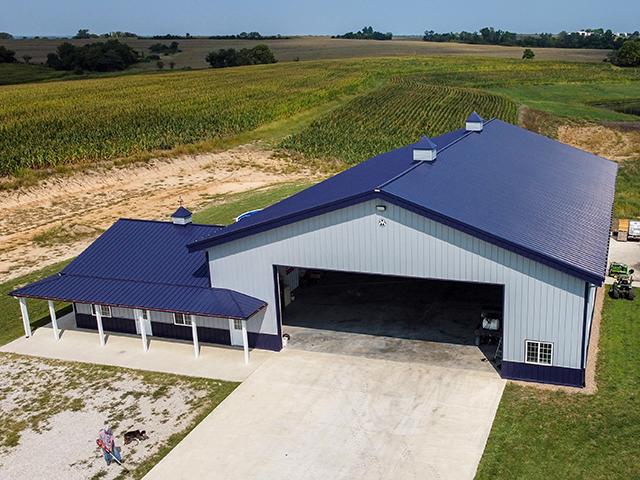