STEAMBOAT SPRINGS, Colo. (DTN) -- Russian military forces invading Ukraine may have thought they came across one of 2022's rarest of finds when they fought their way across the southern region of the country in March and captured the Ukrainian city of Melitopol.

They found a dealership that actually had agriculture equipment in stock.

The Russians won't be getting much use out of their plunder, however.

According to a CNN report, the invaders stole $5 million worth of equipment from the Agrotek dealership in Melitopol. After shipping combines, tractors and planters out of Ukraine and back to Chechnya in Russia -- 27 pieces of equipment in total -- they found their loot had been remotely disabled and, barring some serious software hacking, wouldn't be of any use.

The plan to make away with Ukraine's agricultural equipment seemed to be organized and follows a trend seen in areas of the country currently under Russian occupation. There have been reports of Russian units cleaning grain out of Ukrainian silos to transport back to Russian territory and of Russians trying to strike deals to split profits with local farmers still working the farm ground in the area.

The mayor in Melitopol told CNN in an interview the grain in his city was being stolen.

"We have clear evidence that they unloaded grain from the Melitopol city elevator," he said. "They robbed the elevator along with private farms."

Russian troops stripping the agricultural product of Ukraine to ship back home may trigger dark memories for Ukraine, to the Holodomor, the man-made famine of 1932-33 in Ukraine that led to the deaths of nearly 4 million people. Struggling to adapt to Soviet collectivization and enduring a bad crop year anyway, Ukraine's agriculture output was stripped from its peasants by Soviet agents as punishments for not meeting quotas.

It's been nearly 100 years since that disaster, termed a genocide by modern-day Ukraine, and the country's agricultural output is still a key for the European, African and other and world markets.

A 2021 report from Italian outlet Mondo Macchina indicates there were 130,000 tractors and 28,000 combines operating in Ukraine prior to the war. John Deere reportedly had 35% of the tractor market in the country as of 2014. Belarus's MTZ equipment also had a large chuck with plenty of New Holland and Case IH and Claas machines, as well. The most popular local tractor is from the Kharkiv Tractor Plant.

Melitopol is a city with a heavy agricultural industry. It lies in the Zaporizhzhia Oblast, one of Ukraine's highest wheat production regions accounting for 7% of the nation's output.

DTN has reached out to major equipment manufacturers to ask about the condition of the stolen equipment and about the fate of equipment and dealers in the war zone, but they did not respond by press time. DTN will continue to monitor the issue. 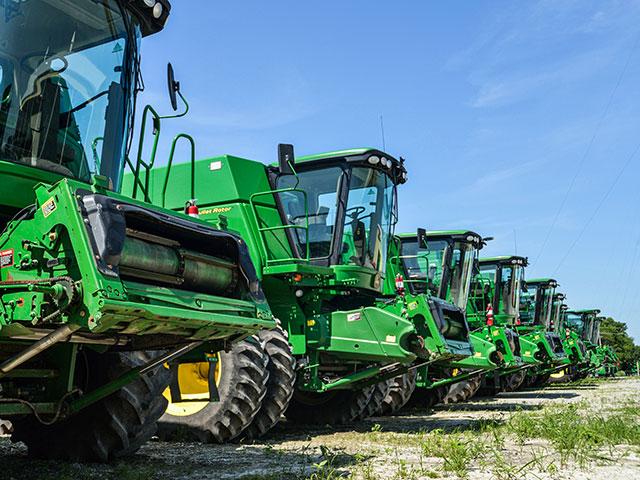