The Homefront Energy Independence Act would permanently ban Russian oil and gas imports, expand the use of E15 by making it available year-round and direct the EPA to finalize an E15 pump label, expand needed infrastructure, as well as provide tax credits to promote the sale of E15 and biodiesel.

"Iowa's clean American-made renewable fuels are ready and available to meet our nation's needs," Ernst said in a joint news conference with Grassley on Wednesday.

"In fact, the current excess ethanol capacity domestically is nearly the same as the amount of Russian gas the U.S. had been importing -- roughly 83 million barrels versus 87 million barrels. With gas prices spiking, it is far past time for President (Joe) Biden to make good on the promises he made on the campaign trail to Iowa farmers and producers and to pass our bipartisan legislation to unleash Iowa biofuel right now."

The Biden administration's action this week came as a result of bipartisan pressure from members of Congress. Also, the United Kingdom announced it was phasing out Russian imports, and the European Union announced a plan to cut Russian gas imports by two-thirds by the end of the year.

So far, the Biden administration has shown little interest in growing biofuels production to cut greenhouse gas emissions in the transportation sector. Instead, the administration has been pushing electric vehicles as the solution.

"Well, the president is probably going to be reluctant to do anything other than cry about and import more oil," Grassley said. "They have a program. Not a very realistic program. (Canceling) the XL Pipeline. Drilling in the United States offshore, Gulf of Mexico, offshore Atlantic coast, put more restrictions on fracking. And then he (Biden) even urged the banks not to lend money to our energy companies.

"This administration has gone from energy independence to energy dependency. To get them to change that I think is going to take the same bipartisan outrage from the Congress of the United States. It forced him (Biden) yesterday to say we aren't going to take Russian oil. But will that same outrage be expressed for drilling more here at home and using our biofuels? I hope so. But I don't know for sure."

Ethanol producers were hit hard by the loss of gasoline demand during the COVID-19 economic shutdown in 2020. Several ethanol plants cut production while others shut down in the face of a challenging margin situation.

The Biden administration has offered no proposals to restore year-round E15 availability, although many retailers across the country have taken steps to expand its availability at the pump.

This week, the price of gasoline hit an all-time-high average price in the U.S. at $4.17 a gallon. The price disparity between gasoline and ethanol has grown, to as wide as $2.

If the legislation is signed into law, Ernst said, it would immediately begin to help consumers at the pump. Many retailers have already started exploring E15 pump compatibility to current infrastructure.

"There are a number of retailers that are very out in front of the issue they have offered E15. In the past, we would like to say that year-round, but at least providing them a means to move forward without infrastructure," she said.

"It will really get a lot more retailers involved and excited about that opportunity. Actually, we can do this immediately with biofuels and using biofuels to replace what we are importing from Russia. It's roughly about the same amount, and we do have those biofuel producers that really ramped down during COVID, and they are just waiting to ramp back up. So, we would increase the demand, obviously, by offering E15 and making it available to consumers all across the United States and through the summer.

"We have heard from those producers that they're ready and able to do it tomorrow if we ask them. So, this is a great common-sense piece of legislation. We just need to get it into law and get it signed by the president so that we can do this." 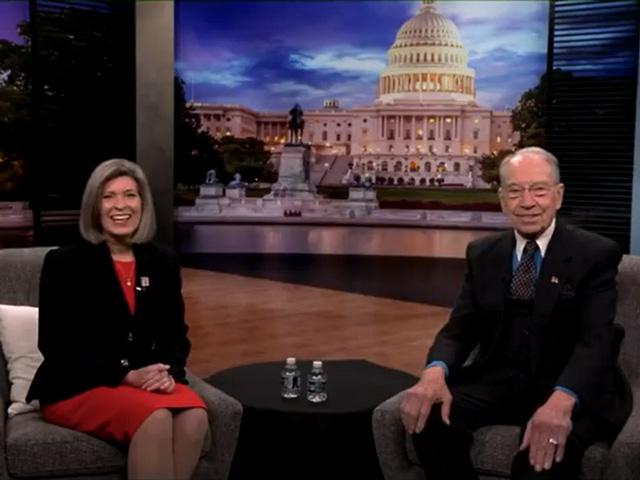