ROCKVILLE, Md. (DTN) -- Jennie Schmidt is an old pro at stewarding herbicide use in grain crops alongside sensitive specialty crops and organic fields.

On her operation on the Eastern Shore of Maryland, she grows genetically modified corn and soybeans and has been a vocal advocate for the use of biotechnology in agriculture, once serving as the first female president of the Maryland Grain Producers Utilization Board.

But she also grows fresh-market green beans, tomatoes destined for canning and manages a vineyard that supplies local wineries. Many of her neighbors also grow specialty crops and organic crops. Schmidt knows all the tricks for avoiding herbicide drift -- both her neighbors' and her own. Her fields are registered with FieldWatch, she communicates annually with neighbors and actually took over weed control from the railway along the stretch of railroad that runs next to her vineyard to make sure herbicides stayed put.

Nonetheless, for the first time in 15 years, Schmidt has watched extensive herbicide drift shrivel, pucker and stunt her vines, producing irregular grape clusters that taper into dead, burned tips, with small, inedible berries. Local experts believe her vines were hit by 2,4-D, dicamba, or both, up to three times this summer, including at bloom in early June -- the critical reproductive stage for a grapevine. While she is accustomed to some level of chemical drift most years, her vineyard usually grows out of it. This year, when it became clear that she would lose $50,000 worth of contracts with local wineries, Schmidt reluctantly reported the injury to her state department of agriculture.

"I honestly don't know how I feel about the department of agriculture asking my neighbors for their spray records," she said. "But we've never had this level of problem before."

Schmidt's story is an increasingly common one, as crop acreage planted to new herbicide-tolerant crops has grown steadily over the past four years.

Dicamba-tolerant Xtend soybean and cotton fields are especially prevalent this year, with total acreage estimated at 60 million acres, exposing more of the landscape to dicamba even as more crop fields are protected from it. Over the past three years, university weed scientists have determined that the newly formulated dicamba herbicides can volatilize and drift large distances in the hours and even days following applications. EPA issued new labels for the dicamba herbicides XtendiMax, FeXapan and Engenia last fall, with new restrictions on who can apply them and how. But once again, state departments of agriculture across the Midwest and South are fielding calls of off-target dicamba movement.

This year, 2,4-D tolerant Enlist E3 soybeans joined the landscape, though in much smaller numbers, alongside millions of Enlist cotton acres. The corresponding Enlist herbicides are showing little volatility, but physical drift can still occur, weed scientists told DTN. Although not nearly as numerous as dicamba complaints, some 2,4-D injury complaints are also surfacing this summer, particularly in cotton, which is extremely sensitive to 2,4-D if it does not have the Enlist gene.

COMPLAINTS RISE ALONG WITH SUMMER TEMPERATURES

In Arkansas, dicamba use was banned after May 25, but injury reports are still coming into the state's Plant Board. As of July 23, they had fielded 321 pesticide misuse complaints, of which 121 were for dicamba, 11 for 2,4-D, and another 10 listed as dicamba or 2,4-D.

In east-central Arkansas, Mike Montgomery has experienced multiple years of dicamba damage on his non-Xtend soybeans, but this is the first year he is reporting injury on more than 2,000 soybean acres to the state's plant board.

"Usually, we would get a drift early on and the beans would grow out of it," he said. "But this year, it's been wave after wave of drift. Just when they start to recover, they get hit again. Fields just show uniform damage -- you can't tell where it came from." Only Montgomery's 500 acres of Xtend soybeans remain healthy and unharmed so far this season -- except where he replanted Roundup Ready 2 soybeans in patches among them.

University of Arkansas Extension entomologist Gus Lorenz has lost soybean research fields to dicamba exposure in the past. Now this year, some of his cotton research plots in eastern Arkansas had to be destroyed after they were hit with 2,4-D drift. Lorenz had been testing a new transgenic cotton variety resistant to Lygus, or tarnished plant bug -- a major pest of cotton for Arkansas growers.

"So we're losing data on technology that is going to come to market pretty soon, and we want to tell growers what the value is, how it fits in their operation, and if it's worth what companies will charge for it," Lorenz said. "We're pretty upset about it. It's hard to support the growers in this state when we keep getting herbicide injury on our work."

In Indiana, the Office of Indiana State Chemist has fielded 121 drift complaints, with 23 suspected dicamba cases. Since about 75% of Indiana growers adopted Xtend soybeans this year, soybean damage has been less common, noted Purdue University weed scientist Bill Johnson. "But wherever adoption of Xtend was less than 100%, you can find damaged soybean fields," he said. "And where there is 100% Xtend adoption, you can see it in the trees. It's not hard to find trees with curled and puckered leaves."

This spring, the Illinois Department of Agriculture decided to extend a state-issued dicamba cutoff for June-planted soybean fields from June 30 to July 15. That decision led to a lot of spraying in some of the hottest, most humid days of the summer so far, noted Kris Ehler, a sales agronomist with Ehler Bros., a family seed and crop consulting company in east-central Illinois. In his region of the state, temperatures soared above 90 degrees and relative humidity pushed beyond 90% on multiple days between June 30 and July 15.

It has become extremely easy to spot those soybean fields that do not contain the dicamba-tolerant gene, thanks to the tell-tale signs of dicamba exposure -- cupped, puckered leaves and twisted stems and petioles on the plant's new growth. "You can see where the non-Xtend acres are, whether they are non-GMO or Liberty or Enlist," Ehler said. "They really stand out." So far, the Illinois Department of Agriculture has fielded nearly two dozen dicamba injury complaints, primarily to non-Xtend soybean fields, said Doug Owens, head of the IDOA's Bureau of Environmental Programs.

Bayer, who owns the dicamba-tolerant trait technology and sells XtendiMax, told DTN the company has not received many complaints about off-target damage this year, but could only supply data up to June 25. "As of June 25, we have received nine off-target movement inquiries, two crop response inquiries and 67 weed performance inquiries," the company said via email. "We are conducting field visits and, in some instances, have found that growers applied XtendiMax with VaporGrip Technology over a non-dicamba tolerant field."

People are often reluctant to make formal reports of herbicide injury, which has likely suppressed official complaints this year and past years, Johnson noted. The ensuing state investigations can be invasive, time-consuming and roil neighborly relations. Moreover, they do not result in compensation for the injured party, only potential fines for the applicator, some as low as $100 per violation.

Because dicamba can volatilize and move large distances, it is particularly difficult to track down the source of the injury, which is only visible 10 to 14 days after an application. Last year, of the 200 dicamba-specific complaints filed in Arkansas, the state's plant board inspectors were only able to pinpoint a pesticide violation in 26 of them.

EYES ON DRIFT BEYOND AGRICULTURE

Now in its fourth year, the phenomenon of off-target dicamba injury is starting to catch eyes beyond the agricultural community.

In Arkansas, the state Audubon office has launched an effort to find and publicize dicamba injury to trees and plants, particularly in the eastern part of the state, where dicamba applications are common.

"We've really raised the profile of dicamba in the conservation community," said Dan Scheiman, bird conservation director for Audubon Arkansas. "It's become no longer just an agricultural issue in Arkansas."

Scheiman has recruited dozens of volunteers to search for and send photos of potential dicamba damage that they find in their communities. "I have engaged volunteers to go out and look for herbicide symptomology on native plants across eastern Arkansas," he said. "And they are seeing symptoms consistent with dicamba -- leaf cupping and petiole twisting on a variety of native plants -- oaks, maples, ashes, trumper creeper, greenbrier, pear and sycamore," Scheiman said. So far, he has received over 450 photos, which he will examine with a tree disease expert to weed out non-herbicide injury.

"Ultimately, it's all about protecting bird habitat," he said. "Exposure to dicamba over multiple seasons could end up killing a tree or reducing its biomass, which then reduces its insect biomass, which is the food for birds, and it reduces the cover available for birds."

For Schmidt, the continued growth of 2,4-D- and dicamba-tolerant acreage leaves her with tough decisions about the future of her highly diversified Maryland farming operation.

"What do we do if this happens again?" she wondered. "How many years do you put up with that? Does it make sense for us to stay in grapes? It would be a big loss -- we've invested in plants, post, wire, labor. That will be a discussion for next year."

Montgomery says he has never seen a situation quite like the one unfolding in Arkansas this summer with dicamba. At his house, the young red maple trees planted four years ago in his yard are dying, along with nearby cypress and oak trees and neighbors' vegetable gardens.

On top of the frustration of the season, he said he feels another emotion, too -- shame.

"This has brought out the absolute worst in people," he said. "I hate it for agriculture, because it's a real black eye for us." 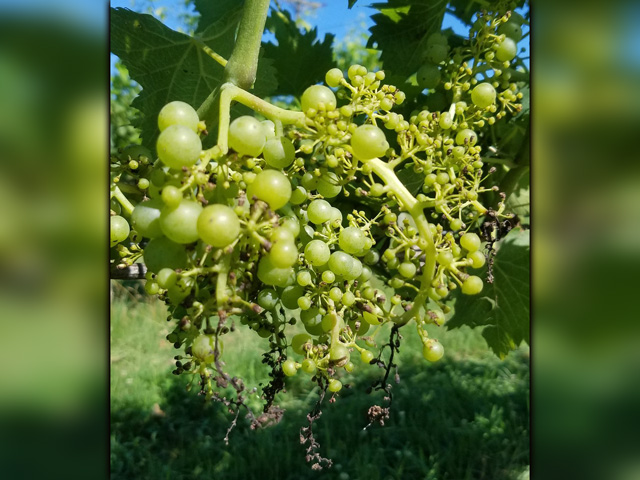