For a week shortened by the celebration of Juneteenth, it is astonishing how stubbornly bullish grain prices unraveled so quickly. On Thursday's close (June 23), after just three days of trading this week, December corn was down 75 1/2 cents at $6.55 1/2 and November soybeans were down $1.22 at $14.15 1/2, both below their 100-day averages for the first time this year.

July soybean oil has fallen over 6 cents since Friday, posting its lowest close Thursday in four months. Bean oil's two major influences, palm oil and crude oil, were both lower this week, but it was palm oil that drew extra attention with a 13% drop.

U.S. wheat prices also participated in this week's big sell-off. September KC wheat fell over a dollar a bushel and closed Thursday at $10.10 3/4, the lowest finish in over three months and below the 100-day average for the first time since before Russia invaded Ukraine.

Even more baffling, the bearish changes happened after a weekend when much of the Midwest experienced uncomfortably high temperatures, there is little rain in the U.S. forecast, the corn basis is uncommonly strong and old-crop futures spreads look extremely bullish for corn and soybeans. We also can't ignore that Russia continued its relentless attacks against Ukraine, including reports of damage this week from missiles at two grain terminals in the southern port of Mykolaiv.

I can't justify this week's lower prices, but if I were forced to explain, I would say bearish market factors included a broad coverage of rain in the forecast across the Canadian Prairies and a forecast of milder U.S. temperatures for the remainder of June.

Rain across Canada will be especially helpful to the western Prairies where conditions have been dangerously dry much of this year, but moisture in the eastern half is already plentiful and not so welcome. Moderate temperatures across the Midwestern U.S. will certainly be helpful to early row crop conditions that are already off to a good start. I would remind readers, however, that DTN's forecast for the months of July, August and September continues to expect above-normal temperatures and below-normal precipitation for most of the central U.S.

As DTN meteorologist John Baranick pointed out in Wednesday's Ag Weather Forum (https://www.dtnpf.com/…), "a hot and dry July is still being forecast for most of the country." "The cooler forecast for the end of June does not mean July or August will be cooler."

The most surprising change in June has been the sudden 22% drop in the price of September palm oil, the world's largest source of vegetable oil. In USDA's June World Markets and Trade report, USDA estimated world palm oil exports would be up 11% in 2022-23 and world ending stocks would be up 9%. This month, prices took USDA's view seriously.

Technically speaking, the two-year bull market in palm oil has been broken and, for the first time since the emergence of the global pandemic, a major food market appears to be returning to more normal conditions -- something we could also probably have said about crude oil, if not for Russia's war. Even though soybean and canola supplies remain tight, this week's bearish influence from palm oil also took those two prices lower and quickly drained money out of the accounts of bullish speculators.

However, it is difficult to get too bearish on soybean oil. With diesel prices near record highs, the U.S. market desperately needs soybean oil to extend limited diesel supplies.

Wednesday, June 22, President Joe Biden called on Congress to suspend federal taxes on gasoline and diesel for three months in an effort to give consumers relief from record prices of both fuels. Crude oil prices dropped a few dollars this week; not because of the President's proposal, but because there is a growing concern that the world's major economies are about to slow, prompted by hawkish anti-inflationary policies and by COVID-19 restrictions in China.

Federal Reserve Chairman Jerome Powell got a lot of attention Wednesday when he told the Senate Banking Committee that a recession is a possibility and, of course, that fueled bearish worries of speculators that have been heavily net long in corn, soybeans and wheat most of this year. More fears were stoked after Reuters reported some G7 members will propose a temporary waiver of biofuel mandates at Sunday's G7 meeting. The level of support for such a proposal is unclear and does not seem likely in the U.S.

The U.S. is not alone in facing a risk of recession. In Germany, Economic Minister Robert Habeck labeled Russia's decision to cut off gas supplies an economic attack, prompting the government to move ahead on an emergency energy plan, described as a close step to energy rationing.

For those trying to manage risk on the farm in 2022, the decisions became more difficult this week. There is not much stress when bullish price behavior coincides with bullish fundamental market factors, but when the sleeping beast of noncommercial liquidation wakes up the way it did this week, confidence in bullish fundamental views is strained.

Historically speaking, the prices of corn, soybeans and wheat are still high. Bullish risks of hot and dry summer months later this year are still in play and Ukraine's prospects for exporting significant amounts of grain in 2022 are as bleak as ever.

Here in the U.S., USDA estimates the winter wheat harvest will be 7% less than a year ago and spring wheat conditions are the fourth lowest for this time of year in two decades. Russia is expecting a big wheat crop in 2022, and even though there is uncertainty ahead, it is difficult to imagine U.S. wheat supplies not being tight again next winter.

It was not surprising to hear Estonia's Prime Minister Kaja Kallas has been one of Russian President Vladimir Putin's fiercest critics and is a leader in the effort to unite Europeans against Russia. According to reporters at AP, Kallas said some countries "were very skeptical two months ago," but now there are "different signals coming from different member states ... that they are on board ..." "So far," Kallas said, "it has been a negative surprise to Putin that we are still united" (see https://apnews.com/…).

For grain prices and energies, Russia's Putin remains a dangerous wildcard, threatening this year's supplies and exacerbating economic pain in the West. Even if grain traders choose to ignore the Putin risk this week, the problem is not going away.

For producers looking at the entire growing season and not just this week's selling, there is still a lot to learn about the year ahead. This year's higher-than-normal levels of crop insurance protection remain an important safety net. If someone could tell us how either the weather or the situation with Russia is going to turn out, we could all breathe a lot easier. 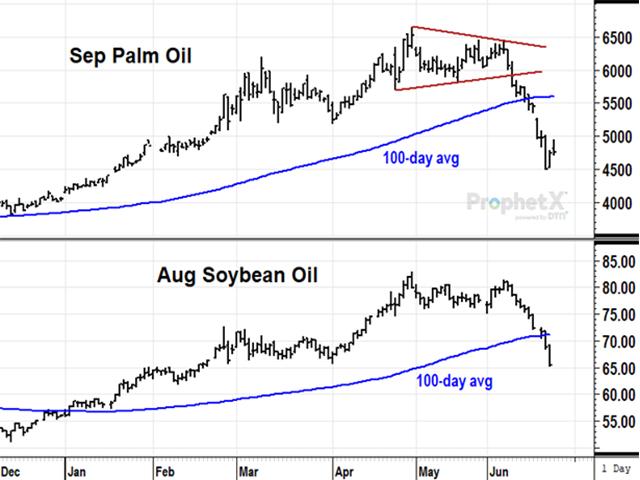