OMAHA (DTN) -- As if all the carbon programs involving agriculture weren't complicated enough, now the Commodity Futures Trading Commission is looking at the largely unregulated carbon arena to see if it demands some CFTC oversight.

The CFTC convened an all-day meeting on June 2 to hear from the wide range of players in carbon markets, from the major commodity exchanges, individual corporations, groups creating individual standards, companies recruiting farmers to sell credits and groups skeptical of the entire concept of a voluntary carbon market.

"The commissioners heard an interesting mixed bag," said Chuck Conner, president and CEO of the National Council of Farmer Cooperatives.

The CFTC's hearing on carbon markets also came as the five-member commission issued a broader request for information from the public on the financial risks that climate change poses and the possible strategies to mitigate or hedge against those financial risks. The value of voluntary carbon markets hit $1 billion last year, and the CFTC noted that financing from carbon markets could exceed $1 trillion by 2050.

Conner, representing the Food and Agriculture Climate Alliance, told DTN that some aspects of carbon trading, such as the contracts farmers sign with companies, don't fall under the purview of the CFTC.

"They have a high threshold to show those contracts are under the regulatory mandate of the Commodities Exchange Act," he said.

Conner added, "There are a lot of things that need to be considered in terms of transparency and standardization and compensation for farmers and ranchers for the multiple services they are providing. We're not there in a broad way in the marketplace just yet."

Conner told CFTC commissioners that agriculture is already such a high-risk business that the entire sector is about controlling that risk. Cooperatives and their farmer members need to know with certainty what is involved in carbon credits. Conner noted farmer cooperatives are focused on what is happening in this space, and some are trying to get into carbon programs quickly now.

"They simply cannot and will not take on additional risk in a carbon market," Conner said. "They have too much already."

These long-term corporate commitments "require thinking today about emission reductions in the future." That has moved markets into forward contracts.

"There is a growing conversation about supply in the market and whether there is enough supply to meet demand," Donofrio said.

"Since our launch, it's been a fairly steep rise in activity and in growth and in open interest, "

People involved in carbon markets and their standards also reiterated throughout the CFTC hearing that carbon offsets are not a primary solution to addressing climate change.

"It's really important to note that voluntary carbon markets are not a primary solution for fighting climate change," Gibbs said, adding, "and that's an argument that's heard a lot in the climate debates. So, it's a complementary tool to reduce and remove emissions over and above what would otherwise be possible."

Sonja Gibbs, managing director and head of sustainable finance for IIF, and a board member for the Integrity Council for the Voluntary Carbon Market, said the challenges of voluntary markets is they lack consistency, and that leads to questions about the confidence of pricing carbon credits and trading in such a market. Carbon markets also are not supposed to be the main drivers to achieve lasting emission reductions.

Multiple people involved in corporate programs or trading exchanges brought up concerns about "greenwashing" by corporations or avoiding allegations of greenwashing because they bought carbon credits that do not meet any real standards.

"If we want to make these markets flourish, there can be no room for greenwashing or double counting of credits. In other words, there should be no room for fraud," said Bella Rozenberg, head of regulatory and legal counsel for the International Swaps and Derivatives Association.

Eric Pitt, a consultant in climate finance for Ceres Accelerator for Sustainable Capital Markets, said federal policy lacks in several areas, such as not having a federal price on carbon. Pitt said that is leading to missed opportunities for wealth creation and jobs as a result.

"We must find the courage to regulate greenhouse gas emissions in this country," Pitt said.

Tyson Slocum, director of energy programs for Public Citizen, was more skeptical of the outcomes from carbon markets, saying there is "a crisis of integrity in offsets," at least partially because these markets are so fragmented. He added, "It's one thing to have standards. It's another thing to have enforcement and oversight over the claims and protocols being made."

Added to the skepticism, at least on carbon sequestration, the Environmental Working Group on Friday held its own webinar on carbon sequestration and greenhouse gas emissions from agriculture. The three university soil scientists who spoke noted data largely does not support that carbon increases in soils under cropping systems.

"Most annual cropping systems are not changing or are losing carbon over time," said Randy Jackson, an agronomy professor at the University of Wisconsin.

"The science is robust, and the map of these measurements are complex, for certain, but it's really necessary to accurately, at scale, measure the amount of sequestered carbon to ensure these actions are real," Frederick said.

That's important for companies to feel comfortable when buying credits so they can report their plans to reduce their carbon footprints to the Securities and Exchange Commission.

"These credits really reflect sustainable agriculture practices like nutrient management, limited no-till and cover crop practices," Frederick said. "It's more specifically photosynthesis and arguably one of the most scalable processes for removing carbon from the atmosphere and sequestering it in the ground."

But those farming practices are not free. "Cover crops cost money. The equipment to do it costs money, and the farmers are already under pressure from dramatic increases in costs, notwithstanding the commodity price increases that we've seen," Frederick said.

Demand for high-quality agricultural carbon credits is high, Frederick said, and is now exceeding the supply.

Shelby Swain Myers, an economist for the American Farm Bureau Federation, said there are at least 14 programs in the market for agricultural carbon credits, as well as monitoring, measuring, reporting and verification processes.

"They come with various contracts, contract commitments as well as data provisions that are unfamiliar and not written for farmers," Myers said.

Along with costs to implement new farm practices also come major data obligations to producers. Companies also are focused on "additionality," meaning they want to pay for new practices, but not pay farmers who may have incorporated these best practices for soil carbon in the past.

"A grower must pick up a new practice or add to the practices that they are already implementing on their farm, which inhibits the role of early adopters to participate in these markets."

Farmers also have many questions at presentations Myers has given on carbon markets over payment, data, liability and contract obligations.

"There's a lot riding on their shoulders for the practices that they are implementing, and to cut them short would be sorely unfair for the revenue potential that we're talking about and the market that is here. So, finding ways that they are fully compensated for environmental benefit that they're generating would be my priority." Myers said.

Conner pointed to the role USDA is playing now with its $1 billion pilot projects under the Partnerships for Climate Smart Commodities. USDA received more than 450 applications just for the first round of projects that included $18 billion in total grant requests. A second set of applications for smaller projects is due June. 10.

Those projects will help not only USDA, but also others look into carbon programs going forward, Conner said. They would also get a boost if Congress could complete work on the Growing Climate Solutions Act, which the Senate overwhelmingly passed last year, but has not been taken up in the House. That bill would give USDA authority to set some standards for carbon markets involving farmers.

"There's a common principle between both of those efforts to create a more transparent, common market out there for carbon and agriculture," Conner said. 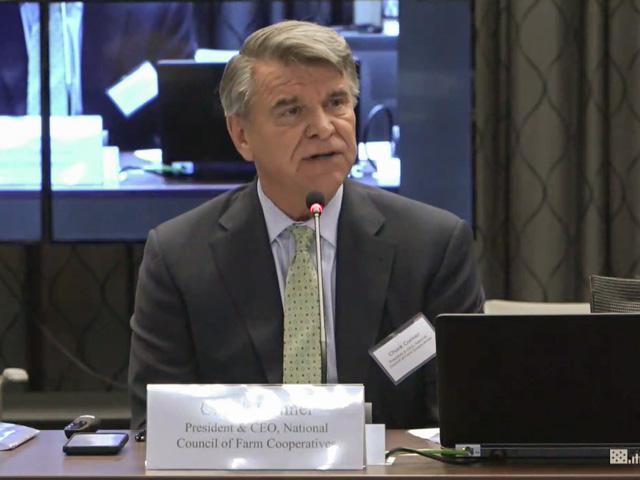