OMAHA (DTN) -- Agricultural groups have been among those calling on Texas Gov. Greg Abbott to stand down from truck inspections at multiple U.S.-Mexican border crossings this week that have brought cross-border trade to a near standstill and risk millions of dollars in fresh produce that could rot waiting to cross into the U.S.

After traffic at border bridges gridlocked and Mexican truckers began to protest, Abbott on Wednesday started to relent at the Laredo, Texas, port of entry bridge following an agreement reached with the Mexican governor of the State of Nuevo Leon, on immigration and other border security steps. Laredo is one of the most high-traffic ports of entry in the country, accounting for more than $20 billion monthly in cross-border trade. Laredo is particularly big in the cross-border shipping of auto parts and other machinery.

The Dallas Morning News reported Thursday that governors of other Mexican states were willing to sign similar agreements with Abbott if it would get border traffic flowing again.

People now are watching to see how Abbott responds moving into a three-day holiday weekend for Easter and whether truck traffic might resume more normal flows starting next Monday.

Abbott began duplicating border inspections and requiring every Mexican truck to undergo a full safety inspection to push back on President Joe Biden's announcement that his administration in May would end the policy implemented under former President Donald Trump to turn back migrants under a public health rule called Title 42. Abbott and other Republicans have argued that would again lead to a flood of immigrants again arriving at the border.

Abbott's inspections at a dozen Texas-Mexico border crossing have gridlocked incoming truck ports of entry responsible for $442 billion in two-way trade in 2021, a nearly 22% increase from 2020, according to Texas A&M University.

The most contentious border crossing has been the Pharr-Reynosa International Bridge, near McAllen, Texas, which was the site of a blockade and protest earlier this week by Mexican truckers. Pharr-Reynosa is responsible for billions in agricultural products, including roughly $2.8 billion in various fresh fruits and vegetables that came across from Mexico in 2020, according to Texas A&M's Center for Border Economic and Enterprise Development, which keeps track of border trade. The Pharr-Reynosa bridge also accounted for nearly $224 million in meat exports, as well as billions in other products.

The biggest impact so far has been on fresh produce. At least $114 million in fresh produce is stuck on the Mexican side of the border, mainly at Pharr-Reynosa, just since April 8 when the duplicate inspections began. That's caused another $15 million in lost economic activity for Texas food processors and sellers and will translate into store shelves being bare of some fresh produce items that typically only come from Mexico this time of year, said Dante Galeazzi, CEO and president of Texas International Produce Association. Galeazzi said some relief will come from the agreement Abbott signed with governor of the State of Nuevo Leon, though movement on Thursday remained slow at multiple border crossings.

"The news of this agreement and at least a few bridges resuming normal operations is good and will provide some relief," Galeazzi stated to DTN in an email. "However, it is still disappointing that we did not see more bridges included and means millions of dollars of fresh produce will still be challenged to cross efficiently through Texas ports. We hope Gov. Abbott and the governors of the other bordering (Mexican) states can reach an agreement quickly so that the hard-working, legitimate Texas members of the trade can get their businesses running again."

Companies have been rerouting trucks through other border crossings such as Arizona to get in fresh products such as produce, Galeazzi said.

Even Texas Agriculture Commissioner Sid Miller, a fellow Republican, wrote an open letter this week to Abbott calling on him to halt the truck inspections. Miller called it "a catastrophic policy, which has now led to Mexican truckers blockading the border." Miller said the wait time facing truckers now at border crossings is causing trucks to run out of fuel and face rotting produce as a result. "Refrigerated produce is being ruined as trucks run out of fuel after being in line for over a day," Miller stated.

Miller added, "You cannot solve a border crisis by creating another crisis at the border. These Level 1 inspections serve as a 'clog in the drain' and divert commerce and jobs to more western ports of entry."

Miller said consumers could find themselves paying for $5 avocados and $2 limes.

The North American Meat Institute on Thursday added its voice in calling on Abbott to halt the truck inspections, citing "massive supply chain delays" that are affecting the American people.

"The redundant inspections engaged in by Texas officials have caused typical wait times of 30 minutes or less to balloon in some areas to as long as six to eight hours. The governor's decision is exacerbating already challenging supply chain issues and contributing to inflation not seen for 40 years," said Julie Anna Potts, president and CEO of the Meat Institute.

"It's unacceptable for trucks carrying food and other important commodities to wait hours at the U.S.-Mexico border. It can present food safety challenges and it's not fair to the drivers who are instrumental in keeping food on our plates," Potts said.

When asked by DTN about specific complications facing the meat industry, Casey Kammerle, a spokesman for the Meat Institute, declined to reference specific companies, but stated, "Many companies that import fresh meat are affected by the long inspections because their products have a limited shelf life."

The situation at the Mexican border with produce comes as concerns already compound about supply chains and food inflation. The Consumer Price Index in March showed food prices overall were 8.8% higher than they were a year ago. Food prices for groceries at home rose 10% in the past year, the highest 12-month increase for food prices since December 1981, the Bureau of Labor Statistics showed.

Down the road about a half hour from Pharr-Reynosa is the Progreso International Bridge. Progreso is a key export location for sending grains into Mexico with Mexican grain companies setting up facilities on the U.S. side of the border. Often at Progreso the Mexican trucks, which are allowed heavier weights than U.S. trucks, cross the border to load grain and deliver it back to Mexico.

According to Texas A&M, Progreso accounted for $84.5 million in corn exports in 2020, as well as $19.4 million in rice, $14.1 million in sorghum and $13.9 million distilled grains. On the import side, Progreso is a major delivery point for fresh fruits and vegetables including lemons and limes, avocados, melons, cucumbers, onions and tomatoes.

A grain supervisor for one U.S. company with facilities near Progreso told DTN the border situation this week was a "nuisance," but he anticipated the logjam and duplicate inspections would die down with the three-day Easter holiday.

Octavio Garcia, owner of Garcia Grain at the Progreso, told DTN that the crossing was backed up for miles all week as trucks looked for ways to avoid the logjam at Pharr-Reynosa.

"It's been backed up and that's been the case all week," Garcia said. "It hasn't affected us as much because this is the slow season for us right now," Garcia said. "But we've been able to cross customs and they have been working late hours here to try to keep things moving. 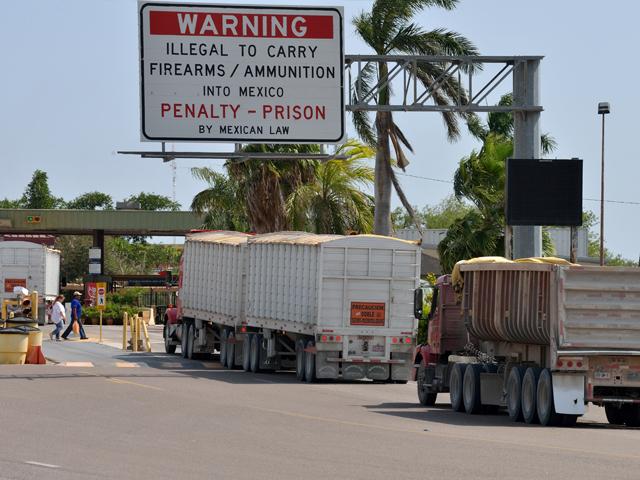