The 2021-22 winter season brings a repeat of La Nina to serve as the overriding world weathermaker. Scientists at the U.S. Climate Prediction Center have put the odds of La Nina being around through the winter at 87 percent. La Nina is the term used when Pacific Ocean equator-region sea surface temperatures are at least 0.5 degree C (0.9 degree F) below average and are accompanied by stronger-than-usual trade winds.

Those cold Pacific waters alter the jet stream notably. On the North America west coast, the jet stream is pushed northward, leading to heavy precipitation and flooding in the Pacific Northwest and Canada. South of this jet pattern, drought chances increase notably in the southern U.S.

What goes north goes south, of course -- and the La Nina jet stream generally turns south from the northern Canadian Prairies into the Ohio Valley and then tracks back to the northeast toward the Canadian Maritime provinces. This track leads to a second heavy precipitation area -- the eastern Midwest and the interior Northeast.

La Nina winters are not all the same. Jet stream tracks wobble. Individual disturbances can develop and have short but significant life spans. Nonetheless, its general influence can't be discounted, and the conditions for crop area moisture at winter's end could have some big changes compared to where we are now as a result.

Most of the region is in line for above-normal temperatures. The highest chance for colder conditions is in the northern sector closer to proximity to chilly air masses out of the far northern latitudes. Precipitation has a variable outlook. The eastern Midwest could get wet. There is a strong correlation between La Nina and above-average precipitation in the eastern Midwest, with the prevailing storm track bringing disturbances into this sector. In addition, above-normal Great Lakes surface temperatures bring the potential for enhanced lake effect precipitation. The western Midwest has mixed activity with near- to above-normal amounts, with the highest chance for above-normal amounts in areas closer to the Mississippi River.

Widespread above-normal temperatures are indicated for the Delta during this winter season. Precipitation has a notable mixed outlook, with above-normal amounts in store north and below-normal amounts south. The threat of severe weather activity in the region because of the prevailing jet stream looping in and out of the Delta is also an important feature.

A winter season with above-normal temperatures and below-normal precipitation appears to be on the way for the Southeast. Dryness along the Atlantic coast observed during the latter part of the fall season will be watched for possible drought development early in the spring.

Warm and dry conditions -- above-normal temperatures and below-normal precipitation -- have a strong prospect to cover the Gulf Coast during this 2021-22 winter season. The absence of a consistent storm track over the southern tier of the contiguous U.S. is the primary feature. Dryness concerns are also possible ahead of the 2022 planting time frame.

A warm season relative to average with mixed precipitation is in store for the region. Temperatures have a widespread above-normal indication. Regarding precipitation, coastal areas have near-normal amounts in store, with interior areas showing an above-normal precipitation tendency. Heavy lake effect rain or snow in locales near the Great Lakes is also likely due to the warm lake temperatures.

The Northern Plains region is one of the few regions with below-normal temperatures forecast for this 2021-22 winter season. Precipitation has a variable trend indicated, ranging from near to above normal in the western portion of the region to near to below normal in the eastern portion. The strength of moisture inflow to northwestern U.S. storm systems will be key to precipitation formation in the Northern Plains. Drought concern remains high even after some heavy rains during the fall season. Drought reports note that it can take months or multiple seasons for moisture to percolate into deeper subsoils and groundwater aquifers, and to recharge reservoirs.

The summary is warm and dry. Temperatures have an above-normal indication for the season because of the region's location south and west of the primary storm track. That placement outside the storm track also leads to below-normal precipitation. This trend is a typical response to the influence of La Nina and is unfavorable for the region's winter wheat, pasture and hay crops. However, the potential for a polar vortex bitter cold outbreak will be closely watched, particularly in the winter following the devastating and deadly Texas cold wave in February 2021.

Warm and dry conditions -- above-normal temperatures and below-normal precipitation -- summarize the expected Southwest pattern. No drought relief is expected with this combination, suggesting that the downtrend in surface water and groundwater supplies will continue.

The region is in line for mainly above-normal temperatures during this upcoming winter along with generally below-normal precipitation. The likelihood of significant drought easing is low. However, there could be some occasions of storm activity in the northern portion of the region, mainly north of Interstate Highway 80. An important note is that only one precipitation event could be enough to make a big difference in precipitation amounts compared with average.

Colder and wetter conditions highlight the Northwest forecast. Confidence is high that this winter will bring above-normal precipitation and below-normal temperatures. This combination directly reflects the typical effects during La Nina winters. After the extremely dry 2021 growing season, this departure from average on the precipitation side would be welcomed and needed. 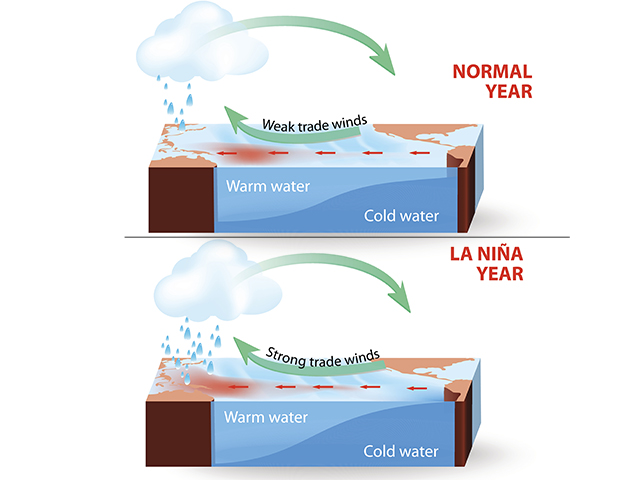