The term "flash drought relief" is likely not an official term when it comes to drought classification and analysis. But such a description is valid in looking at Northern Plains precipitation totals during the 2021 fall season. The rains have arrived and translated into significant drought easing.

Precipitation in the Northern Plains for September and October includes the following totals in inches. Totals are unofficial and sourced from National Weather Service monthly CF6 reports:

The totals are obviously tilted in favor of the Dakotas. And in these states, drought assessments are far different than they were going into the fall season.

Seasonal weather changes and the development of a cool-water La Nina event in the equatorial Pacific Ocean are cited as factors leading to the fall rains.

"The jet stream is shifting farther south and becoming more active and we are now getting stronger cold season storm systems moving into and across the U.S. again," said DTN Frontier Weather meteorologist Stephen Strum in an email. "That rain we saw earlier in October was basically the first big fall storm system to roll through. It really sort of marked the true start of the fall season in a way."

Regarding La Nina, its connection to a more active northern jet stream places the Northern Plains in a promising storm track, which could last through the remainder of the fall and through the winter season.

"Hopefully, La Nina will manifest its typical teleconnection to produce more snow this time than it did last winter. We have seen the response already," said North Dakota State Climatologist Adnan Akyuz in an email to DTN.

DTN's Strum agrees with the La Nina connection to additional storms to come in the Northern Plains outlook. "La Nina patterns favor a more active jet (stream) across the northern U.S. and so we expect most of the northern third of the U.S. to see at or above-normal precipitation now through the winter season," Strum said.

There is certainly more moisture needed to truly end drought in the Northern Plains. The Oct. 26 Drought Monitor summary noted that "Groundwater, reservoir levels, and longer-term (nine-month to 72-month) Standard Precipitation Index (SPI) indicators still indicated very dry long-term drought conditions in the West and Northern Plains." And, regarding forage and grassland improvement, USDA meteorologist Brad Rippey told a regional climate briefing that the proof will not be until next spring rolls around. "It's going to take until next spring to see any recovery ... grass will not grow at least until we get into spring 2022," Rippey said.

Because of that need for continued follow-up moisture, any further precipitation will be tracked drop by drop, evidenced by the tone of comments to DTN from Akyuz.

"I am crossing my fingers, just like thousands of farmers across the state, for the pattern to continue," Akyuz said. 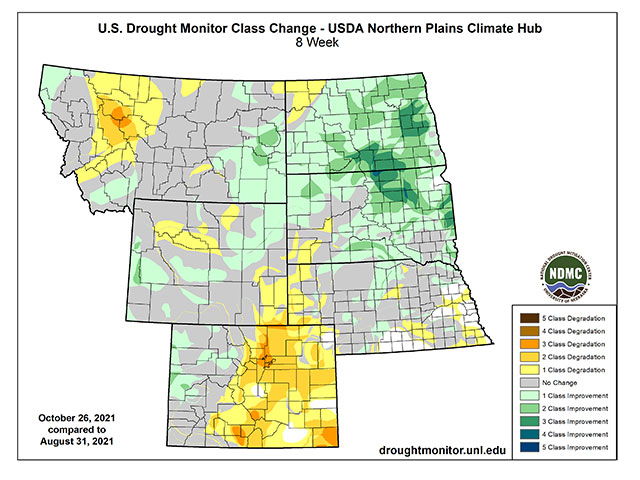