MT. JULIET, Tenn. (DTN) -- Doug Hensley doesn't remember ever being this busy in June. The president of Hertz Real Estate Services has had seven auctions in the past month.

The most recent, completed Thursday morning, was 485 acres divided among six farms in northern Illinois's Stephenson County. The top end of the sale was $14,100 per acre. Next Tuesday, his company is auctioning off 14 farms totaling 1,024 acres in Edgar County, Illinois, which is southeast of Champaign.

"We're just seeing such a demand for farms and quality property, and there's so much money on the sidelines right now that is available to be spent on those farms. It's unlike any time that I've dealt with in my almost 25-year career," he told DTN.

"The market has been really hungry for new volume of farms, and that's been one of the things that has been driving this market for the past two to three years. We just haven't had enough farms to sell."

Buying interest really started to pick up last fall alongside rising commodity prices and 2020's farm incomes, which were buoyed by large government payments. Low interest rates, tight inventory and farmland's stable performance in the wake of the COVID-19 pandemic have all helped push the market higher.

"Farmland sales prices are up 5% to 15% in the past six months with most of the increase coming since the first of the year," said Randy Dickhut, senior vice president of real estate operations at Farmers National Company in a news release. "Competitive bidding among interested buyers is really pushing land prices right now."

Land markets set their highs back in 2013-14 and Hensley said the market had a relatively soft landing.

"Land had this bias toward stable to slightly lower values over a handful of years. During that time, people just out-busheled it. Basically, they grew big crops and were able to maintain marginal profitability." With limited land for sale and low interest rates, the land market held steady to slightly lower from its highs.

"There's no doubt in my mind that we're pretty close, if not at, where we were in 2013-14, and it didn't take long to get there," Hensley said, adding that many formal surveys from universities and the Federal Reserve tend to be lagging indicators.

Hensley and Dickhut both said there's more selling interest among landowners because of the rise in prices as well as potential changes to the capital gains tax, stepped-up basis and the estate tax proposed by the Biden administration. For more on tax changes, please read "Concerns Persist Over Capital Gains and Stepped-up Basis Plans" here: https://www.dtnpf.com/…

"Our agents are fielding an increased number of calls from landowners who want to sell because of the aforementioned reasons. Our pipeline of sales activity for summer and fall is filling up." Dickhut said.

Hensley said the unusual level of selling interest during the growing season could be due to landowners frontloading sales that would normally have occurred in the fall, or it could be additional sales on top of the usual fall business.

"I have a feeling that these are additional sales on top of what's still to come for fall. This market just has a different feel to it," he said. If too many on-the-fence landowners decide now is the time to sell, "that could ultimately harm the farmland market if we have too much volume come all at once. But we're certainly not anywhere close to that today."

In a rising market like this one, it's more difficult to predict what a farm will sell for, especially since demand is coming from both farmers and investors. Dickhut said individual investors -- both first time and experienced buyers -- are stepping into the land market, but they seldom outbid farmers unless they have 1031 tax-deferred exchange funds they need to spend in a short period of time.

Hensley said a lot of people classified as investors are local people, like doctors, attorneys and business owners who "know the value and understand the long-term success of owning a farm." While there are also institutional investors that are active buyers, he said 70% to 80% of the buyers are farmers.

"The best way to sell cropland in the current market is to take it to auction or some form of competitive bidding that brings together the potential buyers and lets them push the price," Dickhut said. 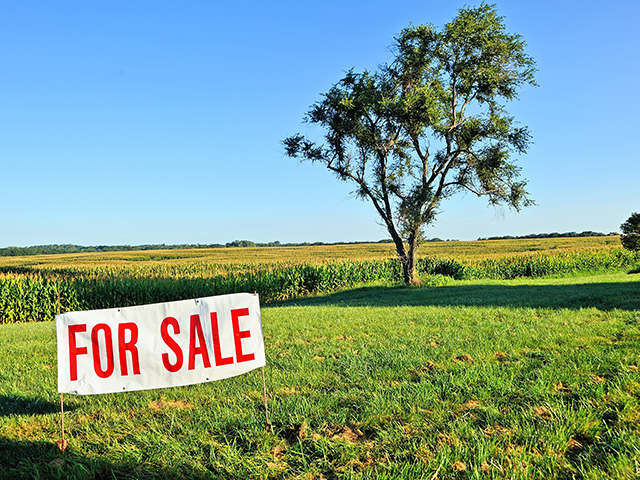