The USDA Production and World Agricultural Supply and Demand Estimate (WASDE) reports for August, as expected, revealed record-large yields for corn and soybeans. Along with the record-large soybean yield of 53.3 bushels per acre (bpa) -- well above even the high side of Dow Jones' pre-report estimates -- came a 2020-21 soybean ending stocks number that was 185 million bushels (mb) higher than that of July. Despite that, soybean futures rallied sharply on Wednesday.

Here's a closer look at some of the changes in both U.S. and world numbers from the Aug. 12 reports:

The August WASDE report was expected to show much higher yields for corn and beans, based on favorable weather and stellar crop ratings, and USDA did not disappoint. Corn yield was raised a large 3.3 bpa to 181.8 bpa. This was 1.5 bpa above Dow Jones' average pre-report estimate. The corn crop of 15.278 billion bushels (bb), if realized, would be a record-large crop and up 12% from last year.

While the 2019-20 U.S. corn ending stocks number of 2.228 bb was below the 2.264 bb average trade estimate, it was just 20 mb below July's WASDE number. Ending stocks for 2020-21 came in slightly lower than expected at 2.756 bb versus the 2.803 bb average estimate. That is still 112 mb above the July carryout and the highest ending corn stocks in 33 years. Both feed and residual and exports were raised by 75 mb each. Corn harvested acres were 84 million, unchanged from June.

On the world front, corn ending stocks were pegged at 317.46 million metric tons (mmt) compared to 315 mmt in July. However, this was slightly lower than the average pre-report estimate of 320.4 mmt. Other notables were a reduction in EU corn production and an increase in Ukraine corn production.

The season average price for corn was lowered a hefty 25 cents to $3.10 per bushel.

Following the August survey-based yield estimates, some analysts expect further increases are ahead, as September will have more objective yield data and weather has been favorable in the past few weeks.

As in corn, USDA reported a record-large soybean yield of 53.3 bpa, up 3.5 bpa from July and 1.3 bpa above the previous record. Production, estimated to be 4.425 bb, is just shy of the record of 4.54 bb, which was posted in 2018. With the highest crop ratings in well over 10 years, at 74% good to excellent as of Sunday, Aug. 9, and continued favorable weather, further yield gains are likely. Acres harvested were left unchanged from June, at 83 million acres.

As in corn, the trade is pondering the possibility that, with good weather from here on out, U.S. soybean yield could increase further, with some ideas that 54 bpa to 55 bpa not out of the realm.

November soybeans finished 16 cents higher than the low for the day, closing at $8.83, despite what appeared to be bearish supply data. The sharply higher soybean oil close also supported beans. Soybean oil rallied thanks to foreign oilseed production being reduced by 1.7 mmt to 479.6 mmt, primarily due to lower rapeseed and sunflower seed crops. September bean oil rallied 0.94 cent per pound to 31.56 cents.

Wheat ending stocks for 2020-21 came in at 925 mb compared to 942 mb in July and the average pre-report estimate of 945 mb. Wheat imports were lowered by 10 mb, while U.S. exports were raised by 25 mb to 975 mb, as U.S. inspections early in the year are 9% higher than a year ago. The 925 mb ending stocks, if realized, would be the lowest in the past six years. The season average price for wheat was lowered by a dime to $4.50 per bushel.

On the world front, foreign wheat production was lowered by 3.7 mmt. EU production was lowered by 4 mmt, Turkey and Kazakhstan were both increased by 1 mmt and the Russian wheat crop was raised by 1.5 mmt to 78 mmt. Brazil wheat production was up by 1.1 mmt also. The net effect is that world ending wheat stocks rose to another record-large 316.8 mmt (11.64 bb) and about 3.3 mmt higher than the trade had anticipated. Some analysts feel that, with no changes for either Australia and Canada and more room on the upside for Russia, world production and stocks are likely to move higher.

Wheat futures reacted little to the report, with September Kansas City slightly firmer (down a penny) on lower winter wheat production and stocks and September Chicago wheat closing lower (down 3 3/4 cents), where it began the day. 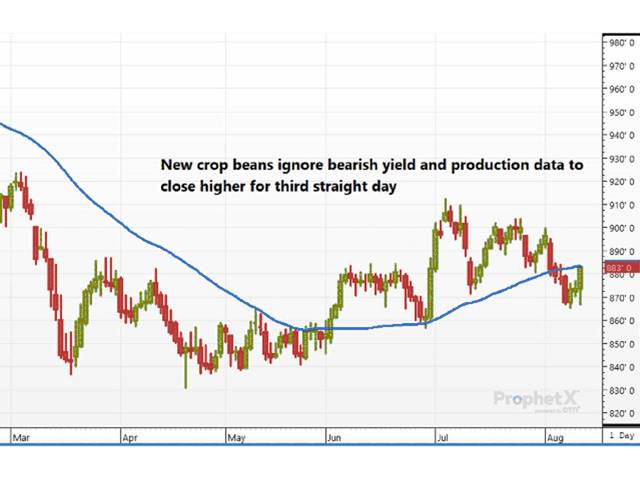