We're winding down the DTN Top 10 ag stories of 2019; you'll see those stories in our Top Stories segments in various DTN and DTN/Progressive Farmer places.

It probably should be said that this year's look back is more than the close of a year, it's what many of us think of as the close of a decade. Side note: Not everyone agrees on that point: Scholars say the next decade actually begins Jan. 1, 2021, therefore we're 365-odd days away from closing out the current decade, but allow me literary license.

However your decennary calendar turns, on a lark, I looked back at the issues that were major storylines in 2010. Coincidentally, but not the reason for said peek, that also was the year I became Editor-in-Chief. It was a tough transition, as I recall, as there were a lot of strange things happening in crop production, and the pull was strong to snatch up my crops editor hat, camera gear and hit the road. Instead, it was my lot to watch the Dream Team that I'd been entrusted cover that crazy crop year, and the roller-coaster market activity that followed.

Our top news story for 2010 year was about those wild market gyrations. Corn futures, which started the year trading around $3.60, were $6.04 by Christmas. It was the year the world started talking about the effects of high night-time temperatures on corn yields. It was also the year farmers and others significantly tarred and feathered the USDA crop reporting system, following 30-cent-plus plummets in all three major grain commodities following the huge jump in crop supplies in the January 2010 World Agricultural Supply and Demand Estimates (WASDE) report. Those issues, and the outcry that ensued, made the subject of USDA reports our No. 5 story in the 2010 countdown.

While we didn't single USDA out in our 2019 Top 10, the issue of USDA's report accuracy and its influence -- undue and otherwise -- on commodity prices certainly was a hot topic again this year.

In 2010, bankers fretted over a looming land price bubble, as auctions reported huge jumps in what farmers and investors were willing to spend on an acre of farmland. Today, we continue to watch for the signs of the bottom falling out, and it is often the relatively flat land values -- helped by low interest rates and outsider land investment -- that lenders point to as a major anchor during these current farm profit conditions.

Ethanol policy was a critical issue in 2010, as the influence war between commodity groups and the ethanol lobby on one side, petroleum interests on the other, fired up in earnest. RIN waivers were not on anyone's horizon yet, but looking back at the scramble for an angle, any angle, to alter the course of the Refined Fuels Standard, we shouldn't be surprised that it has come to the forefront of the debate.

While we didn't pick the "fake meat" issue as a Top 10 for 2019, it certainly was among the staff's consideration list. In 2010, "Changing Consumer Minds" was there, as Walmart launched its "sustainability" initiative and many other major food companies looked to do the same, it seems agriculture still is grappling with the notion of how quickly consumer preferences can turn, and how trends can't really be fought, only contended with.

There certainly has been plenty of changes, and surprises, if we try to remember how life felt at the close of 2010. Who could have foreseen the fast pace of the hemp industry -- industrial as well as recreational -- that we see today? Who could have predicted the vast change in our food and feed export situation back when the phrase "9 billion mouths to feed" was just becoming a banner flag waived by anyone with an interest in agriculture. I still hear that phrase occasionally, and it turns up in the odd PowerPoint presentation, though today it's as likely accompanied by smirks or eye rolls from the audience rather than open excitement.

And, yes, I'm not sure many of our crystal balls saw the current political shifts, and the divergent paths the country as a whole seems headed down, back at the beginning of this decade.

Don't know about you, but my crystal ball doesn't seem to be any clearer than it was then. But that's what keeps this whole thing interesting, isn't it? So whether you choose to celebrate the beginning of the next decade on Jan. 1, 2020, or Jan. 1, 2021, here's to the next 10 years, and to wishing you all the best of fortune in it.

You can find what DTN selected as this year's top ag news story of 2019 at https://www.dtnpf.com/…. 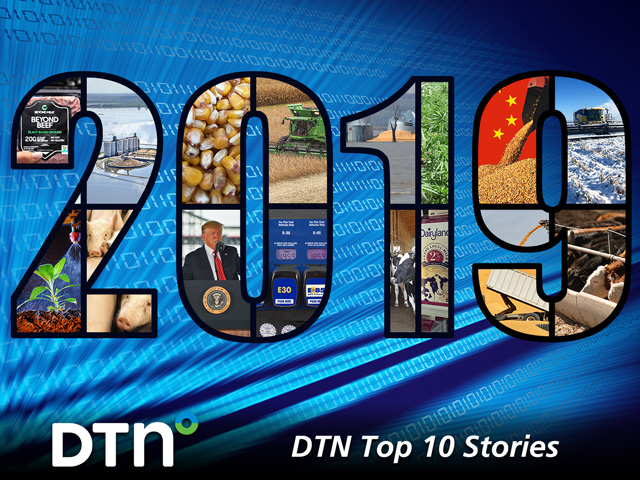