A delegation from the Rosario Board of Trade in Argentina, the country's largest soy port, is visiting China to promote its soybeans and meal products. Another Argentine delegation is scheduled to follow up with another visit in September to speed up the progress. At the same time, a Chinese delegation is currently visiting Argentina crushing plans to work on the process of checking the quality of soymeal for export to China. This is the last step before the Chinese government can approve imports of Argentine soymeal.

Normally, China wants raw beans as the world's largest soybean imported and wants to maintain the world's largest crush capacity. China only imported about 200,000 metric tons (mt) of soymeal total in 2018, bringing in small volumes of meal from India, Pakistan and other Asian countries, noted Denggao Liu, former president of the China Soybean Industry Association. "Normally we prefer to import soybean, not soybean products, such as soybean meal and soybean oil," Liu said.

China has been the largest buyer of raw Argentine soybeans, buying 6.6 mmt (243 million bushels) from the 2071-18 crop. That makes up about 90% of raw beans coming out of Argentina. But Argentina's soymeal typically heads in other directions, with the European Union buying about 35%, Vietnam buying 13%, and 9% going to Indonesia.

"In spite of the talk of African swine fever and rising domestic pork prices, China remains an active buyer of soybeans," Hultman said. "It has to be enticing for China to look at Argentina's financial distress, and cheaper soybean meal prices, and try to figure out ways to take advantage of securing feed, especially while China is locked in a trade dispute with the U.S."

Hultman added, "It will be interesting to see how Argentinian farmers respond. They may look at the government's export taxes and falling peso and decide to hang on to more of their crops, as more reliable ways to store their wealth."

Argentina's tax policy has been a conflict in the past between China's soybean demand and Argentina's emphasis on soymeal. To drive a domestic crush industry, Argentina has maintained higher export taxes on raw beans (30%) than soymeal and oil (27%). The policy stimulated investors to build crush facilities in Argentina, making the country the world's largest exporter of soymeal and soy oil products.

Tax policy shifted in Argentina in early 2018 under President Mauricio Macri. The 30% export tax on raw soybeans is being gradually lowered by .5% each month through the end of 2019. The current export tax on soybeans and meal is at 24.81%.

While tax policy might make Argentina soybean products more attractive to China, the trade dispute between the U.S. and China is likely factoring into greater interest in Argentine soymeal as well, said Ignacio Greco, a broker and agronomist at Mercoplate S.A., a brokerage company in Buenos Aires.

"Do you not believe this is more political than commercial, showing the U.S. that Argentina meal can be an additional source of protein in case of need?" Greco said.

Whether it is to move raw beans or meal, China also is working to help Argentine move its commodities a little easier as well. As Reuters first reported in mid-August, the state-owned China Communications Construction Co. (CCCC) has been in talks with Argentina officials about a dredging contract for the Parana River, which is the main artery for soy commodities flowing out of Rosario's export terminals. Reuters noted COFCO, China's state-owned agricultural trader and food company, has already become the largest commodity exporter in Argentina. 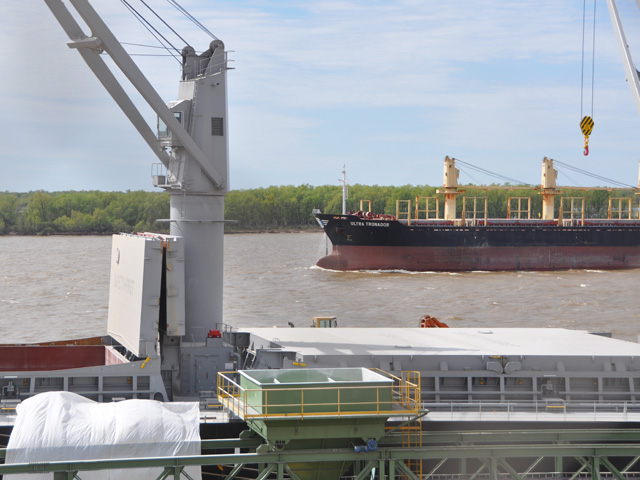