This year, the tour's 62 crop scouts stopped at 356 spring wheat fields around North Dakota, compared to 325 fields last year. The tour also scouted 15 durum wheat fields, and found an average yield of 32 bpa, down from 17 fields averaging 39.3 bpa last year and a five-year average of 40 bpa.

Overall, scouts visited 65 fields in northeast North Dakota on the final day of the tour and calculated a day-three average yield of 48.4 bushels per acre for spring wheat. The tour's third day covered the area north of Devils Lake, North Dakota, and east into Crookston, Minnesota, and southward toward Fargo where it concluded at the Northern Crops Institute.

Scouts reported that harvest is about three weeks out, with most fields in the late flowering stage. However, some scouts noted that fields north of Highway 66 in the Crystal, North Dakota, region may be ready for harvest in just two weeks. Farmers in that area planted in late April, and scouts reported that yield potential there ranged from a high of 52.8 to a low of 32.7 bushels per acre.

Scouts saw some of the biggest jumps in yields compared to last year in Grand Forks County and south to Traill County. There, average yield potential was pegged at 51.7 bushels per acre, well above the 37.9-bpa average yield calculated there in 2018. In contrast, fields east of Devils Lake in Ramsey and Walsh County came in at 31 bpa, down from 53.9 bpa in 2018.

"As the spring wheat tour came to an end Thursday, the Minneapolis spring wheat futures didn't seem to care one way or the other," noted DTN Cash Grains Analyst Mary Kennedy. "Maybe that will change Friday because the final tour result of 43.1 bpa for spring wheat as of July was above the 41.1 bpa last year, and was not released until after the market closed Thursday."

"Even still, the market will focus on the quality and, of course, yield of the crop as harvest begins," Kennedy added. "We could see some harvest in the next few weeks, but it could be drawn out given fields in South Dakota and North Dakota were planted late, not to mention the fields that were either abandoned or planted to something else because of the very late spring planting season. Bottom line is that the jury is still out on quality and protein, not to mention just how much was actually planted and will get harvested in the six states that grow spring wheat in the U.S."

This tour brought together people from across the wheat industry, including millers, bakers, grain marketers, traders and wheat industry groups from throughout the United States and internationally. 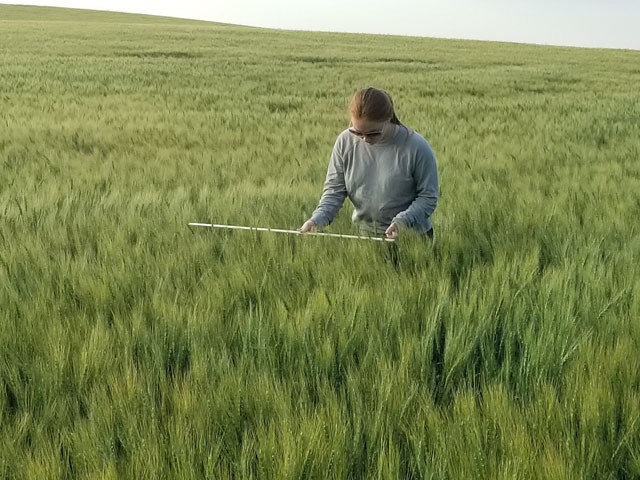