TEKAMAH, Neb. (DTN) -- After some of the most destructive weather in the history of the state, many Nebraska farmers and ranchers are facing a spring of uncertainty.

Ranchers in western Nebraska will see high cattle losses because of the cold winter and recent blizzard. Some farmers in central and eastern Nebraska may not be able to farm some acres as they are currently under water and could be for some time. Others face major issues just getting to their fields with miles of rural roads and highways washed away.

Preliminary estimates put the state's agriculture losses near the $1 billion mark and this number is expected to rise. The number of issues facing many ag producers is daunting with spring planting season just around the corner.

FLOODING ALONG THE MISSOURI RIVER

Quentin Connealy, a farmer from near Tekamah, Nebraska, took DTN on a pickup tour of the flooded Missouri River bottom east of the northeastern Nebraska town of 1,800. The river rose quickly after heavy rains from the "bomb cyclone" melted the region's snow cover on still frozen ground last week. (https://www.dtnpf.com/…)

"The water came in very quickly as we didn't even get (irrigation) well motors out of there," Connealy told DTN. "We have several bins that are land-locked as well."

The Connealy family has farmed along the river for many years. While well before his time, Quentin heard stories about past flooding as he grew up, including a particularly bad one in 1952 in which the area was flooded because of ice jams on the river. He was around to witness firsthand the devastating effects of flooding in 2011.

The floodwaters of 2019 came up much more quickly than in 2011, which didn't allow much planning, he said. Another difference is the number of acres affected in 2019 may be slightly less than in 2011.

While there are limited silver linings to river flooding, Connealy said one plus is the most recent flood waters don't appear to be moving as fast as the flood eight years ago. He estimates about 40% of his acres are under water.

The quick-moving water in 2011 removed fertile topsoil from many fields and deposited tons of sand in its place. With no relatively short-term repairs, bottomland farmers faced a project of many years to restore their land to productivity.

Despite this fact, Connealy said it is still too early to know the extent of the damage from the most recent flood. It is still undetermined if the land will be planted this spring, he said.

"I tried to be an optimistic person, especially as I get older, but we really don't know what is going to happen with these farms yet," he said. "It's only March, but we were already so wet before all of this. I just don't know if we are going to get in there."

Whenever the Missouri River floodwaters do recede, Connealy said there are several steps that will need to happen before any fieldwork can happen. This includes cleaning up debris and the piles of corn stalks from flooded fields, releveling the field, fertilizer application, tillage and then planting.

One positive from a negative is he applied very little fertilizer last fall because of the wet conditions then -- so he won't see any fertilizer losses from the flooded ground, he noted.

Connealy said there could be some prevented planting acres in the region this year. This is not even considering the snow pack in areas to the north and west that could flow by his fields.

Nine miles down the road, in the village of Herman, Craig Kwapnioski is seeing many of his customers affected by the flooding. A Pioneer seed and crop protection dealer, he has one customer who is using a motorboat to reach a hog building, which was high and dry but waters have moved in around the building.

"These people who farm in the Missouri River bottoms can handle these types of problems," Kwapnioski said.

Many farmers in the bottoms also face expensive losses with their center pivot irrigation systems. Farmers could face thousands of dollars in repair bills to fix their pivots, he said.

Many of his customers have not even been able to assess the situation facing their fields. Access to many fields has been cut off with water still present, he said.

Kwapnioski said agronomic-wise the floodwaters will create a less-than-ideal situation in these soils. Often these bottom ground soils are "unforgiving" with tight dirt that has to be worked, he said.

"We were wet from last fall with lowland flooding then, we really don't need any more rain," he said.

As with many living and making a living in the Missouri River bottoms, Connealy said the Corp of Engineers, which manages the river's water levels, needs to make flood control a priority once again. He acknowledges not all flooding can be prevented, especially with unpredictable weather. However, he does believe the government agency can do a better job of controlling the amount of water in the river.

"People need to contact their senators and representatives to get them to do what they are supposed to do and this is flood control," Connealy said. "This situation is putting people's lives and livelihoods under water."

Roughly 30 miles to the southwest, the damage from the volatile weather is no longer hidden under floodwaters. Fast-flowing waters streamed out of the nearby Elkhorn and Platte rivers, destroying nearly everything in its path and then receded fairly quickly.

What is left in many places are miles of rural roads and state highways completely destroyed by the raging waters. While there might be some field damage from the moving water, the larger issue in this area will be farmers getting to their fields and how many miles out of their way will they have to travel.

Chris Popken is a Channel Seed dealer as well as a farmer from Hooper, Nebraska. Farmers in Dodge County and many other counties in the area are going to face major challenges once they get into their fields -- if they can get to their fields.

It appears most fields in the region should be able to be farmed this spring. His family has farms along the Logan Creek north of town and these acres should be farmable, he said.

There could be areas of fields, especially bordering streams and rivers, damaged by floodwaters, but he didn't believe there would be widespread issues. These areas could be 5% to 10% of the area's total acres, he estimated.

However, some farmers could see many roads and bridges to their fields still closed when the rapidly approaching planting season arrives.

Popken said he had heard there are 18 bridges on rural roads in Dodge County out along with State Highway 91 and Highway 30 further to the southeast. There really is no way all the repairs will be done in the near future, he said.

"One of my customers called me the other day and he is considering going to a four-box seed tender from a two-box," Popken said. "This was because he farmed quite a bit on the other side of the (Elkhorn) River and with all the detours he wanted to make [fewer] trips."

With the two main highways over the Elkhorn River closed, anyone who wants to cross the river had to detour north for miles -- right through downtown Hooper. A steady stream of cars and semi-trucks sat in the town of 830 people on Wednesday afternoon as a car accident temporarily closed the lone route.

Popken said it was worse in the days prior as even more bridges over the Elkhorn River further to the south were closed and people had to use this route through Hooper to get to the Omaha area. More highways have reopened in recent days and have alleviated this issue some, he said.

Classes at Logan View Public Schools were closed earlier this week, because of the flooding and road damage, but school was set to open again on March 21, he said. However, according to the school's website, school will not begin again until March 25.

Many schools in the area were not able to have classes this week with roads damaged and many schools being designated as shelters for flood victims. If schools did have classes, many districts implemented emergency bus plans with so many roads closed. 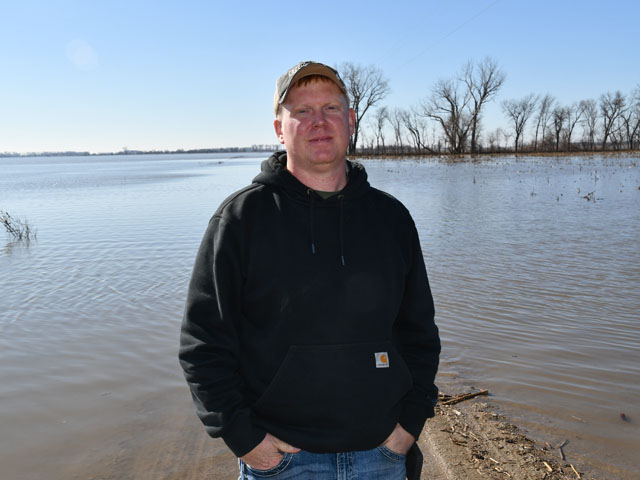