So complex that the three new dicamba labels released by EPA last week are each around 40 pages long and accompanied by nearly 200 pages of documents detailing the herbicides' registration requirements and their potential impacts on the general population, farmers and endangered species.

States are working overtime to interpret the new XtendiMax, Engenia and FeXapan labels and struggling to take the proper first steps to prepare for 2019.

Indiana's pesticide regulators decided to drop all state-mandated dicamba training for its applicators in an effort to cut down on the state dollars and resources devoted to dicamba. Illinois agencies are knocking on EPA's door, asking for clarification on the new applicator requirements, which could mean up to 5,000 applicators in the state are not qualified to apply these herbicides in 2019. And the Arkansas State Plant Board has voted to consider allowing dicamba use in 2019 with a June 15 cut-off.

All are driven by a ticking clock -- states have only a few short months to prepare thousands of applicators and farmers for the 2019 spray season -- and the promise of a heavy workload ahead.

"Last year, we started dicamba training on Nov. 4," said Jean Payne, president of the Illinois Fertilizer and Chemical Association (IFCA). "We already had everything lined up ready to go, and it took us all winter doing 10 classes every week to get 11,000 people trained. And those 11,000 people are out there again, waiting, and we're behind."

Indiana's Office of the State Chemist spent roughly $1.2 million beyond their normal budget dealing with dicamba in 2018, between training applicators, responding to injury complaints, doing lab analysis, talking to media and developing policy and educational materials, said Dave Scott, pesticide program administrator for the Office of Indiana State Chemist. That amount doesn't cover the expenses of Purdue's Cooperative Extension service, which helped train applicators and respond to complaints, he added.

As a result, the agency decided to end the state-led dicamba training supplied to all Indiana dicamba applicators last year in an effort to reduce off-target injury problems.

"Our hope was if we provided some unvarnished training that was completely consistent for all three products, and if we were very specific about how to interpret the restrictions, that additional training would significantly reduce the number of misuse complaints that were filed," Scott said. "But that didn't happen."

Instead, state investigators saw dicamba injury complaints increase slightly in Indiana, from 133 in 2017 to 141 in 2018.

"I was really satisfied with our training, so I don't think it was a training deficiency or training delivery or availability issue," Scott said. "It seems more like there may be some inherent challenges to the use of these products."

So, for 2019, Indiana applicators seeking their mandatory annual dicamba training will have to turn to the registrants of the three herbicides -- BASF, Bayer and Corteva, Scott said.

In the meantime, Indiana's Pesticide Review Board will meet and try to decide what additional restrictions might help reduce off-target dicamba injury next year. Their options include changing enforcement strategies for applicators who cause off-target pesticide injury or adding 24(c) label restrictions -- if EPA permits this practice (see story here: https://www.dtnpf.com/…).

Scott said the new labels still have much of the same vague language that made them so hard to enforce for state regulators in 2018. For example, there is no definition for "neighboring" or "adjacent" fields for the prohibitions on spraying when wind is blowing toward a sensitive crop -- even though state regulators asked EPA to pick a specific distance.

Nor are many of the restrictions -- such as not spraying during a temperature inversion or 45 days after soybean planting -- any more enforceable, Scott said.

"There is no way to verify these," he said. "These labels are still fraught with enforceability challenges."

In addition to interpreting and enforcing the new 2019 labels, Scott estimates it will take several more months to finish processing the 2018 complaints -- possibly up until dicamba spraying begins again in 2019.

"That's what happened last year, after all," he said.

Every state has its own system of certification, but in Illinois and many other states, each commercial retailer facility has a single commercially certified applicator who oversees a team of licensed -- but not necessarily certified -- spray operators, IFCA's Payne said.

"We are in limbo," Payne said, as the state waits to hear if spray operators that have already passed a standard state pesticide competency exam could be considered "certified applicators" permitted to apply dicamba.

"If not, we've got 5,000 people to put through the state commercial applicator certification program before we even start worrying about the requirement for dicamba-specific training," she said.

The certification requirement will also apply to the employees of farmers with private applicator licenses, and possibly those who mix or load dicamba on retail or farm operations.

"That's a whole other suite of people -- people who work in chemical sheds and do the mixing or haul it out to the field to load it," Payne said. "If they truly have to go through a commercial certification testing, we could have a real revolt on our hands with employees in the ag retail industry."

Both Payne and Scott expressed skepticism that changes to applicator certifications will have any impact on off-target dicamba injury.

"I think spray operators have been unfairly characterized as not knowing what they're doing when there are clearly issues beyond their control with regard to the [postemergence] application of dicamba," Payne said. "Illinois ended up with 330 dicamba complaints in 2018 and 246 in 2017. Prior to that, since 1989, we have had less than 100 ag-related pesticide complaints for almost 30 years."

In a sharp change from last year, the Arkansas State Plant Board has tentatively voted to allow postemergence use of the three dicamba herbicides in the state in 2019. The board agreed to advance a farmer-led rulemaking petition that would allow dicamba use with a June 15 cutoff date and special permits required for any applications after that date.

The petition also asked for a 1/4-mile downwind field buffer for dicamba applications and a 1-mile buffer around certified organic farms.

The Plant Board's Pesticide Committee will meet on Nov. 26 to "further refine usage restrictions" based on the petition, the Arkansas Agriculture Department said in a press release. "The Pesticide Committee will present its recommendation for use of dicamba during the 2019 crop season at the Plant Board's next meeting, scheduled for 1 p.m. on Thursday, Dec. 6," the release stated.

Last year, the Plant Board banned over-the-top use of dicamba in the state from April 16 to Oct. 31, 2018, after the state received nearly 1,000 complaints of off-target dicamba injury to soybeans and other vegetation in 2017. That complaint load dropped substantially this year, but the Plant Board still received around 200 complaints of dicamba-injured plants and trees this past summer.

For more information on the new dicamba labels and registration, see the EPA website here: https://www.epa.gov/…. 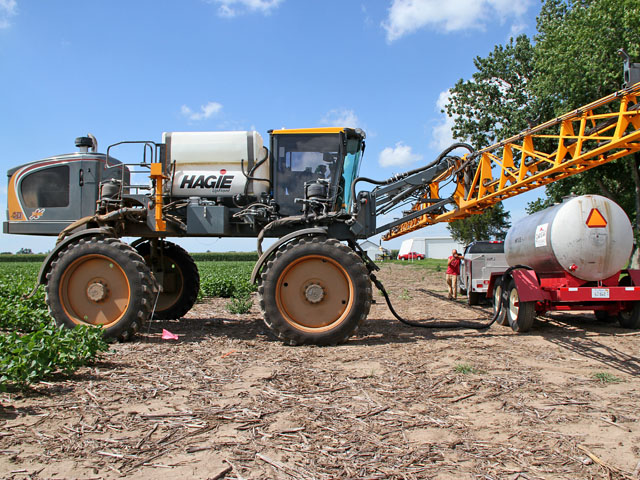