BOONE, Iowa, (DTN) -- Offering some assurances to Midwest farmers, Agriculture Secretary Sonny Perdue said Wednesday he got a call from President Donald Trump just as he was heading to the Farm Progress Show.

"He called me just as I pulled into the gate and said, 'Sonny, we need to get that year-round E15 done. Let's get it done,'" Perdue said a couple of times Wednesday.

Perdue toured the Farm Progress Show and joined corn growers at a rally for the Renewable Fuels Standard before joining farm broadcasters on stage for a question-and-answer event. Perdue also is spending the next couple of days campaigning in rural areas of Iowa with Republican congressmen and GOP Gov. Kim Reynolds.

The secretary said Wednesday that hopefully the Trump Administration will have an announcement on year-round 15% ethanol blends "sooner rather than later." But there needs to be some rebalance with refiners, he added. "He (President Trump) needs something he can demonstrate to them as well." The secretary also said EPA Acting Administrator Andrew Wheeler understands the importance of moving ahead on year-round E15.

"Administrator Wheeler will be on board," Perdue said, adding that it is important any rule is drafted at EPA on E15 has to pass legal muster.

Perdue said Trump knows what he committed to during the presidential campaign in Iowa. But one of the challenges has been "hiccups with the refinery group," Perdue said.

The agriculture secretary defended the U.S. trade actions while arguing that the $4.7 billion in trade aid announced Monday will take some of the sting out of the some of the lost exports while the U.S. continues recalibrating the trade relationships with China, Europe, Japan and North America.

"There's not a farmer in America, really, that would rather not have a good crop at a fair price rather than a government check," Perdue said. He added, though, that farmers built their businesses based on 20% exports. "We're so productive that if there were no barriers across the world then we would own the market. That's why they keep our people out and he said enough is enough. We're going to have free trade, and we're going to have fair trade."

While the U.S. has reached a tentative deal with Mexico on a new trade agreement, talks continue with Canada to keep the North American Free Trade Agreement a tri-lateral deal. One area pushed by President Trump has been Canada's supply management program for dairy. Perdue said he did not see how any trade deal with Canada could ignore that.

"I don't know how it could be," Perdue said. "The president has been pretty firm on this, as you know he's talked about the 250% to 300% tariffs there. We're not asking Canada to do away totally with their supply-management system, but they are going to continue with it, we want them to manage their supply. That's essentially what happened when they started dumping this Class 7 milk on the international market and suppressed milk prices internationally. It hurts our farmers and our dairymen."

Perdue said he was hopeful there will be a good agricultural deal from news this morning and conversations Perdue has had with U.S. Trade Representative Robert Lighthizer.

Noting the mantra of farmers that they want "trade, not aid," Perdue said another payment tranche could come later on depending on how trade issues are resolved. "If we're able to resolve all these trade disputes right away prior to harvest then that's the best thing that can happen. This will be calculated on an ongoing basis."

Perdue defended the payment methodology that groups criticized, including dairy, wheat and corn growers. "The methodology we used is the same we would used if we went to the WTO and had to litigate the tariff damages," Perdue said. He added, "We have to demonstrate what the tariff damage is. I wish I could control corn prices and bean prices."

"For my purposes I would have liked for it to be more even," Perdue said. "But this is a proven methodology of calculating this type of thing that you have to defend in court and that's what we had to go with."

The agriculture secretary also disagreed that the trade disputes have done irreparable damage to U.S. agricultural exports. Perdue said he believes the U.S. will regain those markets.

"The world knows we have high-quality products that they can depend on and know we can produce," he said. "I don't believe irreparable damage has been done. It may take a little while to get those markets back. I think that's a legitimate question."

Chris Clayton can be reached at Chris.Clayto@dtn.com 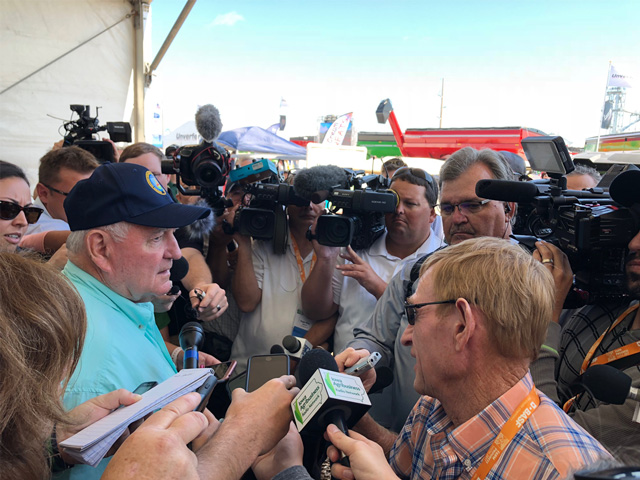