Why is that corn plant growing striped yellow leaves? What poisoned that sickly soybean seedling?

Two of the biggest culprits -- herbicide injury and seedling diseases -- can sometimes be hard to distinguish. DTN consulted University of Illinois weed scientist Aaron Hager and plant pathologist Nathan Kleczewski to create a four-step guide to uncovering the guilty party.

At this time of year, the most common crop diseases are a rotten bunch. Roots infected by Pythium, Fusarium, Rhizoctonia and even Sudden Death Syndrome (SDS) are all potential causes of sickly or dead corn or soybean seedlings, Kleczewski noted.

Don't just snap a picture of the suspects -- dig up affected plants and examine their roots, Kleczewski said. Here are the calling cards of each disease:

-- Pythium: This fungus causes mushy, rotten roots that are nearly translucent in both corn and soybeans; if you run a finger along them, the external part of root will easily slough off.

-- Rhizoctonia: Look for red or black discoloration of soybean or corn roots, sometimes accompanied red discoloration at the base of the seedling above the ground and little notches on the stem.

-- SDS: This disease can turn soybean roots jet black, and produce a blue growth in especially wet conditions. Fine roots will be missing.

-- Fusarium: Here, the rotten corn or bean roots can have a reddish hue to them, and will be clearly decomposing.

Of the herbicide suspects, fomesafen carryover in corn and mesotrione carryover in soybeans are not uncommon in drier years, Hager noted. Both are broken down by microbes in the soil. Microbial activity is slowed in dry soils and comes to a halt when winter descends.

"So this spring, when we went from parkas to shorts in a very short period of time, and everyone planted very quickly, there was not a whole lot of time while soils were warm enough for microbial activity to resume," Hager explained.

On the flip side, cold, wet conditions can also leave soybean seedlings vulnerable to damage from lingering soil-applied pre-plant herbicides. "When a soybean is emerging in cold, wet conditions, its ability to handle that herbicide can be compromised and you will start to see injury effects on [the seedling] because the plant couldn't metabolize the herbicide fast enough," Hager said.

-- Fomesafen (Flexstar, Reflex and others) carryover in corn: Look for white or yellow striping within the veins of the third or fourth leaf of a corn plant.

-- Mesotrione (Callisto) carryover in soybeans: This can cause stunted soybeans and an unhealthy light-green to yellow hue.

-- Soil-applied herbicide (such as PPO-inhibitors) injury in soybeans: Look for reddish or orange-colored lesions on cotyledons and hypocotyls, where plant tissue came in contact with the herbicide; new growth will likely look healthier.

2. TAKE IN THE BIG PICTURE

"Anytime you walk into a field, the first thing you should do is take in the big picture -- what's the pattern of damage look like?" Kleczewski said. "Am I seeing straight edges? Usually seedling diseases aren't going to follow distinctive patterns."

Low, wet spots in the field can tell a story, too, Hager said. If plants in those sunken holes actually look healthier than their surroundings, it could be that the higher organic matter there absorbed or tied up a herbicide left over from the previous crop. If instead those low spots look sicklier than the higher ground, a moisture-loving fungus is more likely the culprit, Kleczewski added.

The breakdown of some herbicide active ingredients, such as chlorimuron (Classic), depend on soil pH levels -- high pH slows degradation of the chemical, and low pH speeds it up. "Look for patterns based on pH differences in the field," Hager suggested. "Are plants severely stunted at the end of the field where the lime pile sat two years ago?"

The best detectives have long memories.

That means knowing what chemicals were used on each field, not just this spring, but in the past year, Hager said. Some herbicides are capable of causing carryover injury to crops half a year after a summer application, if conditions are dry enough.

Also consult your records for spring pre-emergence applications. "You have to consider: Did we screw up something this year -- put something in the tank that shouldn't have been there?" he said.

Knowing a field's disease history is especially important for seedling diseases, which have spores that can hunker down in the soil year after year, Kleczewski noted. It's worth knowing which ones are plaguing you, because seed treatments can be tailored to target certain diseases like Pythium or SDS. Consider sending disease samples to a plant diagnostic clinic to get an official ruling on which fungus is causing disease in your field, he said.

"Sometimes they're not mutually exclusive," Hager said of disease and herbicide injury. "The conditions that favor pathogen that need cool, wet soils will also favor soybean injury from soil-applied herbicides, like PPO-inhibitors." 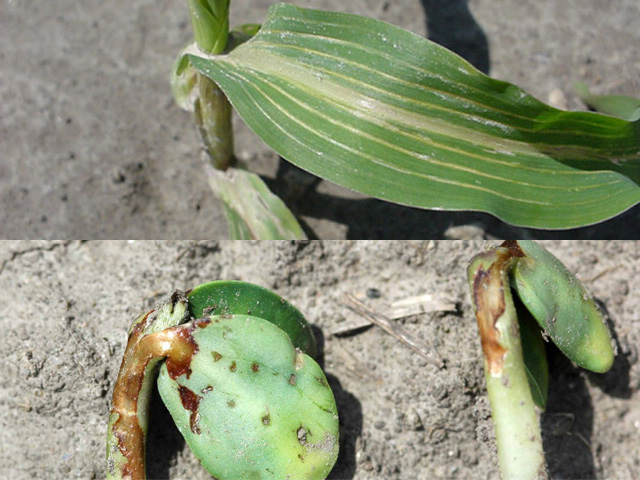