ROCKVILLE, Md. (DTN) -- Winter wheat is waking up early after an unusually warm February wrapped up in the Great Plains.

"[February] has been very warm -- almost off the charts versus average," DTN Senior Ag Meteorologist Bryce Anderson noted. In Kansas, February temperatures were 8.4 degrees above the average in Wichita, 7.8 degrees in Dodge City and 7.6 degrees in Goodland. "This is a leap, not a step, above average," Anderson said.

The previously slumbering wheat crop has taken notice, said Romulo Lollato, Kansas State University wheat and forages Extension specialist. "The warm temperatures have really made the crop start growing earlier than it should," he told DTN.

With a wheat crop advancing several weeks ahead of normal, growers need to expedite their spring management of the crop, namely nitrogen applications and scouting. The early crop also poses problems for growers in droughty parts of Kansas and Oklahoma, and threatens all producers with an increased risk of a deadly spring freeze.

According to Lollato, many wheat plants in southeast and south-central Kansas have started to elongate the stem. In the far western part of state, some producers are even seeing the head starting to form belowground.

This is a critical time for the plant, because the size of the head is being determined, Lollato stressed.

"The crop is developing fast -- there's nothing we can do about that," he said. "So we need to be on top of nitrogen applications because right now is when the plant really needs it available at the root zone."

The warm weather will also favor wheat pests such as aphids, so scouting will be key. Most seriously, high temperatures can dismantle wheat plants' genetic resistance to wheat streak mosaic virus, which is carried by the wheat curl mite.

It has been a good growing season for that disease, Lollato noted.

"We saw wheat streak mosaic even in the fall, because conditions were so warm then," he said. Producers will likely have to abandon those fields this spring because the disease is untreatable and it decimates yields.

The wheat crop may be off to the races, but in some parts of the Southern High Plains, it faces a serious handicap: lack of moisture.

Producers in eastern Colorado, southwestern Kansas and most of Oklahoma face moderate to severe drought heading into the spring, Anderson said.

Some areas in far southwestern Kansas have seen fewer than 3 inches of rain since September, Lollato noted. In sharp contrast, some parts of the south-central region are running 180% above their normal precipitation, he added.

All eyes will be on the weather in March, Anderson said. "Rainfall patterns during March are actually promising in terms of bringing precipitation to central and eastern Oklahoma, but western Oklahoma through western Kansas and Colorado appear to be out of the loop when it comes to meaningful precipitation," he said.

As wheat develops and the head moves higher up within the plant's stem, its ability to withstand cold temperatures without lasting damage decreases.

"The average final freeze date for Kansas is generally early to mid-April in the southeast and south-central region and more likely early May for northwestern regions," Lollato said. "Generally, we see some field loss from freezes in Kansas, and if we have an early frost this year, there is a bigger chance of them hitting those sensitive growing periods."

If the crop dodges a spring freeze, however, the early start to the season could be a great head start, he added. "If the freeze never comes, and it's just a warmer year, we most likely would have a grain-filling period during cooler temperatures, which would be beneficial," he said.

"It's all going to depend on weather, but we need to think of the possibilities." 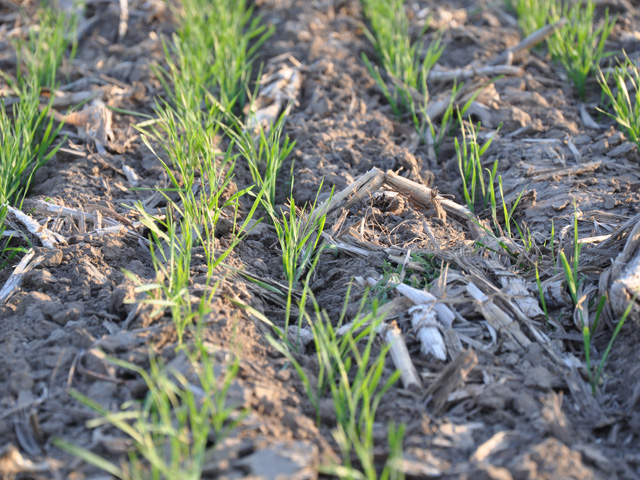