The Arkansas summer was hot and dry, ground-cracking dry. There was rain in the forecast, as on other days this year, but too often, it came to no good result.

On this July day, Zack Brown's poly pipe -- UV stable, resistant to cracking, impact and abrasion -- was splitting open. Long runs of poly pipe seams were opening like zippers all over Zack Brown Farms. One pipe was patched by his work crew only for another to split, water running where it shouldn't. One rogue flow deeply rutting a neighbor's equipment path.

Brown is a big man. Hands on hips, in shorts and wearing those rubber knee boots you see around flood-irrigated fields, he wasn't saying much. "It makes a mess," is about all he did say, out loud anyway, moving off to another poly disintegration.

Zack Brown Farms, outside Success, Arkansas, has a logo that previews the farm's direction. It incorporates the Arkansas state boundary. The words "On the Road to Success" run down its crooked eastern border, that line otherwise marked by the Mississippi River. They would be words hard-won on a day like this afternoon. "My dad likes to joke that [Success] is just up the road from failure," he quips.

Summer days can be routine here -- and not. Three-dozen diesel pumps supply water to Brown's precision-leveled fields. "In April, we were trying to get all the water off so we could plant a crop," he says. "But, in northeast Arkansas, we have to have irrigation, there's no ifs, ands or buts about it. Water management is the whole summer for us. Rain is nice. But, if we don't get rain, it's a daily battle."

Zack Brown Farms is 2,700 acres and has been passed through family generations for 100 years. Brown is married to Shayna Brown, who grew up within a few miles of the Brown farm. "She's country. I'm the farmer. She's all livestock and cows. I'm the crop guy. If she has her way, we'll have [cattle]. If I have my way, we won't. We'll see."

Zack Brown Farms has reached an interesting place in its farming history. It has experienced strong growth, adding 900 acres over the past 10 years to reach its current size. The farm is of a size that has Brown wondering if this is a time for him to reduce sprayer seat time, trading it for more management, analysis and planning.

Brown's personal resources and abilities are stretched by episodes like the poly pipe (he eventually replaced long runs of it). "At 1,800 acres, I could do a lot more on my own. At 2,700 acres, there are times when I need to manage more -- to get the rice going instead of spraying for two days straight," he says. "I'm stretching myself too thin."

And, yet, Brown would be slow to give up the spraying responsibilities even to his father. It's a farm function he enjoys, and it gives him an eyes-on view of 1,000 acres of growing crops. Spraying is a scouting opportunity every grower understands.

But, spraying is all about the crop in front of the sprayer, not what is going on in the next field or checking pumps or keeping up with equipment maintenance schedules and employees. "It would be time," he says, "to make sure all the employees are in the correct fields and being sure the next fields are ready and prepared correctly to achieve our goals."

Brown sees a direct line between his farming opportunities and his grandfather, Quinn Brown. Mr. Quinn was running the farm, about 80 acres, in the early days of World War II and was being called by his draft board to report for his physical. Expecting to be drafted, Mr. Quinn unsuccessfully looked for someone to take over the farm. He proceeded, then, to make plans to sell the cows.

While herding them up, "his horse threw [Mr. Quinn] into a metal gate and messed up his back," Brown says. He drove to Little Rock for his physical, but because of his back injury, the Army rejected him as unfit for military service. "He got to continue farming, and that's probably the only reason I really have a farm here today, is my grandpa got bucked off a horse," Brown says.

Mr. Quinn was Brown's biggest advocate. "You know, he was the only one happy when I told my [family] I wanted to come back and farm. Grandpa was real happy," Brown says.

Mr. Quinn was no absentee landlord, either. "He checked on his farm up until the final few weeks of his life. He would follow me around in the rice planter, dig down to find rice seed, struggling to see it with one eye," Brown says.

There was a day five years ago, Sept. 26 to be exact, when Mr. Quinn went for his last ride. Zack and his father, Mitch, had rigged a chair to a wooden pallet. The pallet, chair and Mr. Quinn lifted by bucket and pallet forks up to the level of the cab. A video from the day shows Mr. Quinn, cane in hand, taking Zack's hands as he walked gingerly into the cab. As the two combined rice, one video image is memorable. Zack, behind the steering wheel, is talking to Mr. Quinn beside him. Through the windshield, you could see Mr. Quinn looking out over the rice harvest, his big smile plain for all to see. "I knew that one was going to be his last ride," Zack says. It was. He died a month later.

Brown and a visitor lean over a desktop computer watching that video produced by the Arkansas Farm Bureau Federation. "It's a family business, my grandfather started this," then 27-year-old Zack told the Farm Bureau correspondent. "I take a lot of pride in being able to come back home and carry on for another 50 years, to do my part to keep this the Brown's homeplace," he continued. "To be able to have my 94-year-old grandpa ride in a combine and spend some time with him in a job that he loves and that I love means a lot. It's memories I will always thoroughly enjoy."

Our conversation went back to Mr. Quinn. "You know, he took pride in everything," Brown says. In 1984, he tore up his whole yard, installed a sprinkler system, hauled in massive rocks, built rock flower beds and laid new sod. "Now, he's 15 miles from town. Nobody hardly sees it other than us," Brown says. "But, he would always say, 'There's only one way to do it, and that's the right way.' That's right. I'm trying to do my part to keep our farm the best it can be. Between my father and grandfather, I learned about good work ethics and stewardship of this farm. I've been brought up to do this the right way."

-- Watch the video about Zack Brown at https://www.dtnpf.com/… 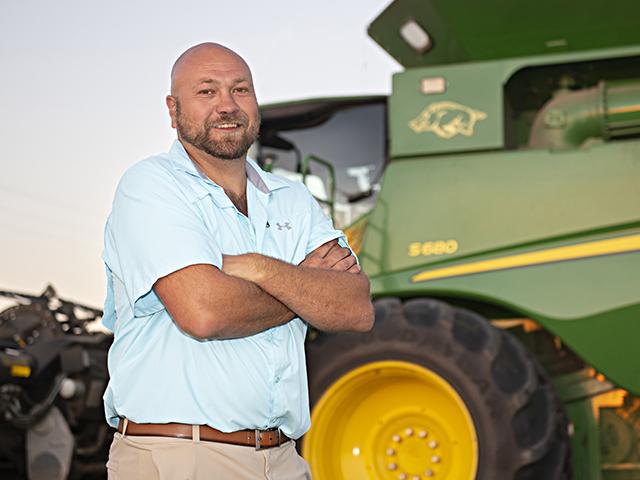