Kris Ehler isn't afraid of a sticky situation -- especially when corn yield is on the line.

That's why the farmer and agronomist for Ehler Brothers Co. keeps offering his customers a high-yielding corn hybrid that contains no Bt traits targeting the rootworm -- a potentially risky move where they operate in central Illinois.

Ehler Brothers manages that risk with a simple, low-tech tool: the use of bright yellow sticky traps that track rootworm beetle populations. As long as the beetle numbers stay low, that hybrid stays in their customers' fields and has averaged 9 bushels per acre (bpa) above its counterparts in their company plots over the past four years, Ehler says.

In this age of biotechnology and Bt corn plants producing their own insecticides, sticky traps might seem like a quaint throwback.

"It's a pretty simple device," admits Joe Spencer, an entomologist with the University of Illinois. "It's a piece of yellow cardboard coated with a sticky material."

The yellow isn't for decoration. The color is designed to lure plant-seeking insects to their gooey doom. "Yellow coloration is a pretty dominant color in plant pigments, so it's associated with finding plants," Spencer explains. "So, the trap is attractive to a lot of insects, including rootworm beetles."

Once staked out in a soybean field, these sticky little sentinels are the best agronomic assistant a farmer or scientist could ask for. They collect samples 24 hours a day for a week at a time, removing any variability of beetle activity during the course of a day.

"They are the best kind of crop scout," Spencer says. "They're happy to work in all kinds of weather, they don't complain, they're cheap, and when they're done, you throw them away."

But, when growers began using Bt corn hybrids with toxins targeting the corn rootworm in their plant tissue, interest in slogging through soybean fields to monitor sticky traps for the next year's corn crop waned.

"Monitoring really slacked off," Spencer recalls. "Which is too bad, because that is one of the pillars of integrated pest management (IPM). If you're not monitoring pests, you're not doing IPM."

Bt corn hybrids did a good job of keeping corn rootworm populations down -- for a while. But, the rootworm is a fast-evolving pest, and scientists have now documented populations resistant to every Bt trait on the market: Cry3Bb1 (YieldGard RW), mCry3A (Agrisure RW), eCry3.1Ab (Agrisure Duracade) and Cry34/35Ab1 (Herculex RW). Because of resistance problems, companies have focused on selling pyramided hybrids, such as SmartStax, Qrome and Agrisure Duracade 5122, which contain two of the above rootworm traits instead of just one.

Many farmers are paying top dollar for pyramided corn hybrids without knowing whether the pests they target are present at a damaging level, Spencer explains. Meanwhile, the continued default planting of rootworm-traited corn endangers the longevity of newer Bt traits on the market. Most concerning are the recent discoveries of rootworm populations with resistance to Cry34/35Ab1, which long stood as the final effective pillar of many pyramided rootworm Bt hybrids on the market.

Spencer says he routinely pulls trap data showing little to no rootworm beetles for multiple years in a row from fields of pyramided corn in central Illinois. "I think if more growers were really thinking about what their rootworm pressure is going to be, we probably could be avoiding a lot of unnecessary use of Bt," he says.

"We've put a lot of pressure on rootworm populations with Bt products and selected for resistance, and now we're running out of the Bt arrows in our quiver. A good way to preserve the efficacy of these products is to make sure we are only using them when we need to."

If rootworm traps staked into a soybean field capture 1.5 beetles per trap per day, it's time to worry about rootworm control in the following corn crop, according to a 2013 Iowa State University study. That research was based on 12 traps placed in a single bean field -- a pretty onerous number, Spencer admits.

Ehler places just two traps in each customer's field and checks them once a week in July, when rootworm beetles start flying. "Then, if we see elevated numbers, we come out with additional traps," he explains. Numbers have been low in his region and many other parts of the Corn Belt since the 2015 June flooding, Ehler notes.

Walking through canopied soybeans 60 to 80 feet into a field for multiple customers each week is a good workout, and it's only getting more strenuous as more farmers ask for this service, Ehler says. The chance to pay less for hybrids better suited to yield well in your region is obviously a popular option.

"We're getting more pressure from our customer base to do this, because they're saving $20 per acre on the technology fee for pyramided corn and often getting an average of 8.5 bpa more in yield -- that's $40 to $50 an acre ahead in a market that has really thin margins right now."

Using these hybrids with fewer or no rootworm Bt traits is more than just a financial savings when populations are low, Spencer adds. It also helps lower the population of Bt-resistant rootworms in a region over time.

"There is no fitness cost to Bt-resistant rootworms, so they're still out there in the population, and they will be in the next generation, too," he explains. "But, each year that you use only Bt, you're filtering out more susceptible rootworms, and the resistant ones become more dominant. So, just by not putting Bt out in the field, you're not exposing rootworm populations to this selection for resistance."

Other companies are taking note. Wyffels Hybrids has been using a sticky-trap monitoring program in its customers' growing regions for six years. In 2019, they checked traps in nearly 800 fields. Likewise, Bayer has done internal sticky-trap monitoring for years but now wants to get farmers on board, too, says John Fietsam, Bayer corn systems lead for North America. It (Bayer) rolled out a social media-based program in 2019 designed to encourage its grower customers to start monitoring their rootworm populations with sticky traps and post their results online.

"We're trying to drive awareness of corn rootworm risk," Fietsam says. "It helps get farmers out actively scouting their own fields and understanding pest dynamics out there so they can make informed decisions about what technology they use. We want them to refocus and not allow a couple years of inconsistent pressure to lull us to sleep and wake up to find a corn rootworm problem later on."

Bayer distributed 2,750 sticky-trap kits to growers in the summer of 2019 and launched a social media campaign that drew thousands of eyes to its website's corn rootworm educational pages, Fietsam says.

The data collected by companies like Bayer and Wyffels from sticky traps can be a valuable tool for the industry. It allows companies and scientists to produce county-level risk maps showing exactly how rootworm populations are behaving over time, which gives growers the opportunity to use technology only when they need it.

Farmer requests have led DTN, Progressive Farmer's parent company, to explore the use of Smart Traps in Western corn rootworm monitoring. It combines a traditional sticky trap with an onboard camera to detect, count and report on pests in near real-time, says Scott Williams, DTN entomologist.

"Preliminary results suggest that the traps catch decent numbers of beetles when deployed with a yellow sticky card and a bait attractant. However, we need more data to be able to match capture rates to best-management practices," Williams says.

"It is unfortunate that we are doing this monitoring on the back end, however," Spencer says. "The proverbial horse -- Bt resistance -- has been out of the barn roaming for years, so it would have been nice if it happened sooner."

Next-generation traits are coming, but scouting will still be key. Bayer's new SmartStax PRO hybrids use RNA interference (RNAI) technology to target rootworms. The company expects a commercial launch of the trait early in the next decade.

"Maybe one of the best things that can happen is that people will continue to monitor when new products come out on the market, and maybe it will help preserve the long-term efficacy of the next big thing -- like the new RNAI technology," Spencer says. 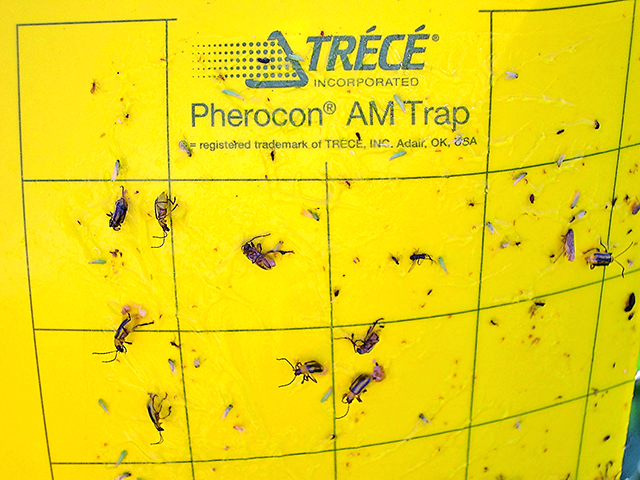