KANSAS CITY, Mo. (DTN) -- U.S. farmers right now are in a good economic position. However, macro-economic challenges remain while the war in Ukraine has further wrecked supply chains and put increasing expectations on U.S. farmers to increase production of crops such as wheat.

That's a high-level summary of some of the key points from speakers Monday at an Ag Outlook Forum hosted by the Agricultural Business Council of Kansas City and Agri-Pulse.

Despite higher-priced inputs, interest rates and inflation, overall conditions for Midwest farmers right now are stronger than they were before the pandemic, said Nate Kauffman, an economist for the Omaha branch of the Federal Reserve Bank of Kansas City.

"At a high level, economic conditions in agriculture are remarkably strong," Kauffman said.

Kauffman later added, "Many producers are in a good financial condition this year" with "very limited signs of financial stress."

Before the pandemic, agriculture was facing prolonged periods of economic stress and challenges with trade. Fast forward -- incomes are "incredibly high" despite more expensive input costs. Land values are 25% to 30% higher than before the pandemic, Kauffman noted.

Before the pandemic, economists worried about an uptick in loan default rates. Now, loan delinquencies "are at all-time lows," Kauffman said.

Still, there are growing macroeconomic headwinds. Broad economic growth is coming down quickly from a strong 2021 driven by demand and investment. Real gross domestic product (GDP), which was 5.7% in 2021, could fall to 1% for 2023 and possibly land in negative growth in 2023.

Banks also reported fewer farmers this year taking on new debt or renewing loans. Some of that loan demand has started to pick back up, Kauffman said, and farmers are now starting to see higher interest rates.

"I do think the higher interest rates will be a headwind, he said.

Along with higher interest rates, the dollar remains strong. These inflationary pressures could start to affect U.S. agricultural exports. "So, there are definitely risks," Kauffman said.

Labor right now remains a driver of inflationary pressure and it is affecting several agricultural industries.

Monica Massey, executive vice president and chief innovation officer for Dairy Farmers of America (DFA), said the average number of job openings since the pandemic has gone from 500 to 1,500, so the country's largest dairy cooperative is "losing ground."

"We're trying to run a business that runs 24/7," she said. "We're worried about keeping the business running when we can't keep people in."

Kanlaya Barr, director of corporate economics at John Deere, said there are about 3 million fewer people in the U.S. workforce than before the pandemic. That is impacting every industry.

"Right now, there are about two jobs for every person in the market looking for a job," Barr said.

Touching on supply chains, Barr said the auto industry right now has as many as 45,000 vehicles waiting on specific parts before they can ship. Deere has faced similar challenges, she said.

"This is like whack-a-mole. You got a part here then this part is missing," Barr said.

Further supply chain disruptions could come from China's continued zero-COVID policies that can shut down parts of the country, Barr said. Another supply chain problem could come this winter, especially with a potentially fragile energy situation in Europe, she said.

Daniel Whitley, administrator for USDA's Foreign Agricultural Service, said the war in Ukraine has exacerbated global hunger, but food and commodities were already facing supply chain problems during the pandemic. Various export bans in countries such as Indonesia, Argentina and India also have added to the challenges.

The war also has combined with other supply chain problems to cause a series of complications across the food industry. Ukraine has been the world's largest supplier of sunflower oil, a popular product in foods because it is neutral in taste, low in saturated fats, and it is non-GMO, said Christine Cochran, president and CEO of SNAC International, which represents global snack manufacturers.

Snack food companies and other food processors have tried to shift to different oils, but that also demands changes in packaging where supply chains have been stretched and delayed. It becomes even more complicated when companies have to adjust their labeling because their oil may now come from GMO oilseeds.

"You have a lot of organizations you have to deal with to make those changes in labeling work," Cochran said, adding the supply chain was already fragile before the war. "What the war in Ukraine did was take a fragile supply chain system and further degrade it."

Arlan Suderman, chief commodities economist at StoneX Group Inc., said Russian President Vladimir Putin "was able to leverage food as a weapon to get other countries to support him" as well as using fertilizer as a similar lever.

"Suddenly, trade changed depending on if you are a supporter of Russia," or Ukraine, Suderman said.

All of that has translated into higher freight costs and longer delays moving commodities globally. "It's totally changing the dynamics of global trade," Suderman said.

Suderman said roughly 15% of Ukraine's storage facilities for grain have been damaged in the war and Russia continues to target those facilities. In just the past few days, the port of Odessa, Ukraine, was hit by drones.

"Anything they can do to stop Ukraine from producing grain and exporting it," Suderman said. He added, "If the war were to stop today, it will take years to rebuild the infrastructure."

Given the damage to both grain storage and river shipping, Ukraine right now also has significant logistical problems moving its commodities, said Seth Meyer, chief economist at USDA. "Right now, they can't move everything they are producing," Meyer said.

All of this leads to doubts over whether Russia will allow the safe corridor passage of ships to extend past November. As of Monday, 218 ships had left Ukraine moving grain and products, but they have also been mainly smaller ships.

For Ukrainian farmers, there also continue to be questions about how much they plant and harvest. Besides facing danger being in their tractors in open fields, Ukrainian farmers face other problems such as access to fertilizer and credit. That's going to adjust what Ukrainian farmers can plant, Suderman said.

Looking at next year, "I think it does reshape what they grow, looking at crops with the highest value and lowest risks," he said.

It's expected that U.S. farmers will expand winter wheat production. The crop insurance revenue guarantee for winter wheat in Kansas, Nebraska and South Dakota is $8.77-$8.79 a bushel. That's going to be an incentive to plant more wheat, Suderman noted.

Australia has an incentive to expand production. Argentina will test global markets with a biotech wheat variety, and everyone will be watching to see how that goes.

"They are pushing the envelope trying to get the world to accept it and some countries are starting to do so," Suderman said.

Whitley added he expects some expansion of wheat acres in Canada as well.

Looking at fertilizer and moving to less reliance on global imports, Whitley also added USDA will soon make some funding announcements on a $500 million on domestic fertilizer production from a request for proposals rolled out earlier this year.

Aaron Annable, acting consul general for the Canadian consulate in Chicago, criticized Russia's war for the food crisis hitting poorer countries in Africa and Asia, as well as displacing the global fertilizer market.

Touching on Canadian crop production, Annable said farmers are having a positive year with wheat production expected to rebound from a poor 2021 and increase production 56% and canola up 30%.

He noted Canada is the world's largest producer and exporter of potash. Canada provided 80% of U.S. imports last year. Canada has made more investments, including a new mine in Saskatchewan, one of the first in 50 years.

Highlighting trade with the U.S., Canada is the top agricultural export market for 26 states, Annable pointed out. The U.S. and Canada each buy roughly $30 billion in agricultural and processed food from each other annually.

"You can count on Canada on being a secured and reliable supplier for U.S. products," Annable said.

Highlighting "cross-border energy," Annable noted Canada had increased 300,000 barrels of "hydrocarbon" production, almost all of it going to U.S. Roughly one in five barrels of oil consumed in the U.S. comes from Canada and more than 70 cross-border oil and gas pipelines, he said.

"Canada's oil and gas industry matters to Canadians, but it also matters to the U.S." 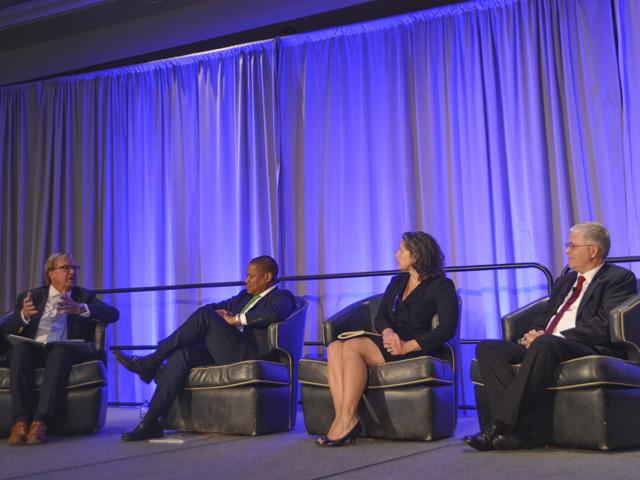