With all the other chores, it can be easy to let bull maintenance slide after breeding season. Don't. "Just because their job is done, we don't want to forget about them. We want them to be ready to do their job next time," says Brandi Karisch.

The Mississippi State University (MSU) Extension beef cattle specialist says oversight is especially important with yearling bulls. "People pay a lot of money for these, and if they don't take steps to maintain them, they may only be able to use them one season," she cautions.

Karisch and her husband, Matt, run their own purebred herd, and Karisch oversees the MSU beef herd. They agree that, if done right, bull care is a year-round job. It all starts with a hard look at body condition scores (BCSs) on bulls when they are pulled out of the breeding pasture. As a reminder, BCS goes from 1.0 to 9.0, with 1.0 being emaciated and 9.0 being obese.

"Our mature bulls maintain at least a 5.0 BCS when they're with the cows, but the yearling bulls may go down to a 4.0, even if they're at a 6.0 when they're turned out," Karisch explains.

They feed bulls free-choice hay along with a 14% protein, 3% fat commercial commodity feed at around 1.5% of their body weight. They topdress this with a chelated mineral.

"We use Availa 4 mineral. It includes zinc, copper, manganese and cobalt, which are the most impactful minerals for semen quality. We've seen a benefit from it and use it year-round," the cattle specialist says.

At MSU, she adds, they usually start supplementing bulls, even the mature ones, 45 to 60 days before the next breeding season. This is also prior to annual Breeding Soundness Exams (BSEs), which normally take place 30 days pre-breeding.

"You don't want an abrupt diet change around the time you're doing a BSE," Karisch says. "It is crazy what can make a bull quit producing sperm."

The target BCS for bulls Karisch helps manage at MSU is a 6.0 before breeding season begins.

"It is the same concept as having your replacement heifers at a 6.0 before they calve," she notes. "It is so important they be in good body condition. A lot of things in the reproductive process involve fat."

Both the Karisches and MSU have a fall and a spring breeding season, which means it's even more important not to let BCS slip.

"You have to take better care of them because they only have a four-month season to recover rather than nine months," Karisch says. "They may need a little extra TLC to get [their] condition up before they go out again."

In Dwight, Kansas, Gary Johnson's native grass pastures help keep bulls in good shape during breeding season. He says they usually don't see BCS drop below a 5.0. By August, protein in the grass here starts to drop, and he supplements with cubes. From the first of November through the first of May, Johnson definitely has to supplement to keep bulls at a strong BCS for when they go back in with the cow herd.

While that may be a worry in Kansas, Karisch says frostbite in the South is generally less of a concern than heat. Here, it's important cattle producers have a heat-abatement strategy and avoid ponds to protect against foot rot. She stresses this makes it important to pick bulls well-suited to the climate.

"Select bulls adapted to your environment. Particularly for producers in the South, bulls that have hair coats that slick off are better able to adapt to heat," she explains.

And don't forget the shade. Karisch notes mature bulls are often held in separate pens to hold down fighting; and in those cases, they can't easily get to shaded areas to cool down unless you plan ahead.

Bulls need to stay on regular vaccination and deworming schedules. Karisch says they booster bulls with Vira Shield VL5 with lepto in the fall, and they deworm young bulls even more often, if needed.

"Almost anything can make a bull quit producing sperm," Karisch explains. "It is added insurance. Bulls are typically in smaller lots and graze closer to the ground, so they can pick up parasites."

If they are having a wet year, they treat for liver flukes with Valbazen (albendazole) drench and Ivomec Plus. If they aren't treating for flukes, they use Safe-Guard (fenbendazole) and Ivomec or Cydectin split into fall and spring treatments.

Whether it's extra feed, deworming or keeping bulls separated to hold down fighting, bull care takes a year-round plan. A herd bull may only work a few months out of the year, but when the time rolls around, it's important he's in the best shape possible to do the job. 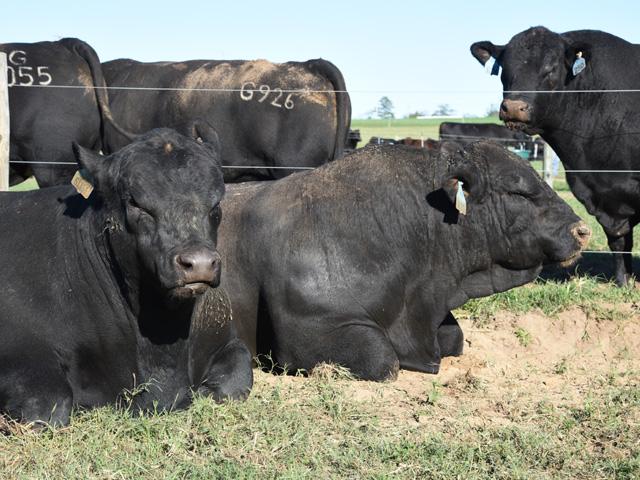