There's a saying that heterosis is the only free lunch a cattle producer ever gets. But, what kind of "free lunch" are we really talking about?

Tennessee's Clark Jones can put a number on it for you. He says a Beefmaster bull on an Angus herd will add 63% heterosis in one generation. What that looks like on the ground is 100 pounds more weaning weight per head.

Jones's numbers come with a lot of experience. He is a longtime seedstock breeder of Beefmaster cattle and a former member of the American Angus Association. He's been on his family's rolling, lush, Savannah ranch for 56 years. And, for most of that time, he's been in the cattle business.

First, Jones worked the commercial side with an Angus herd, a breed he says he still loves. But, after he used a couple of Beefmaster bulls on that cow herd, he was so impressed with the next two calf crops, he decided to shift into the Beefmaster purebred business. That was in 1986, and his mission has remained pretty constant ever since.

"I really see this as my life's work, my passion," Jones explains. "I like to think of being a seedstock producer like this ... we are a servant for the commercial industry. Our goal is to help them raise a more profitable animal that will, in turn, give consumers a better eating product. Our motto is 'Quality is a Powerful Thing,' and we believe that now more than ever."

Jones's ranch manager, Justin Williams, is equally committed to the Beefmaster breed. He says there are several points he believes set the breed apart.

"Longevity is one key advantage, and that offsets one of the biggest costs a cattle producer has today: developing heifers. These cows will be productive 12 to 13 years easy."

In addition, Williams notes the breed is unique in that it seems to have no issue with fescue toxicosis, a common complaint in parts of the country where fescue is the dominant forage. The fescue, when it heads out, can carry high levels of a toxin, which impacts important production traits in a cow herd, most notably feed intake, gains and milk production. Williams says Beefmaster's tolerance to fescue gets a lot of cattle producers' attention.

"We have all Kentucky 31 here," notes Williams of the Savannah operation. "The Beefmaster handle it well. The endophyte doesn't bother them, and they are also heat tolerant. The two go hand in hand."

The heat tolerance of the Beefmaster breed is of special interest to researchers at Texas A&M University (TAMU), where the announcement recently was made that the university's animal science department is adding two new breeds to its research herds: Beefmaster and Red Angus.

Beefmaster Breeders United (BBU) began collaborating with TAMU leadership in fall 2018 to work toward this goal. It's a partnership that recognizes the breed's outstanding maternal traits, growth, efficiency and adaptability globally.

Cliff Lamb, head of TAMU's animal science department, says there are a number of reasons they are building these two new herds, but adaptability and heat tolerance head the list.

"Globally, about 70% of the world's beef cattle are in tropical or subtropical regions," he notes. "One of our initiatives at Texas A&M is to be globally recognized as a department that focuses on cattle adapted to those type regions, and we are well-positioned for that geographically."

Lamb says the Beefmaster herd, which should eventually number 50 to 60 top-end females, will be the "front door" to our department.

Jones has played an important role in the initial work going into refining the Beefmaster breed, as well as the new TAMU herd.

He notes today's Beefmaster bull isn't the same one your grandfather may have tried. A lot has changed. Jones says a concerted effort has been made through BBU to breed in improved carcass traits and to have the genetic data available to provide as much information as possible on both bulls and cows in the breed. Jones says he has five of the top 10 cows in the breed for carcass data now, as well as the top terminal bull.

"When BBU built its genomic-enhanced expected progeny differences [GE-EPD] evaluation in 2009, nearly 25% of the carcass data that went in was mine," he says, noting they had made a commitment to collecting and analyzing the data when the technology became available.

Williams adds they use the data they collect on animals constantly to be sure the farm's herd stays on track and is constantly improving.

"If you're not doing the job, you can see it statistically sooner than you can see it any other way," he says. He explains they use the GrowSafe collection system. It allows them to measure individual animal feed intake and weight, monitor animal behavior and growth, predict feed efficiency traits and optimize breeding decisions.

Jones says the operation maintains strict criteria for which animals they will keep, either for their own herd or to sell in their annual bull sale or annual female sale.

For females, they focus on weights, weaning weights, udder and teat scores, and milk production. On bulls, they are especially tough.

"You can buy a dozen heifers, and maybe one doesn't work," Jones explains. "But, when you sell a bull, there's no room for anything less than perfect. We BSE [Breeding Soundness Exam] them at 14 months, and they must pass. If they don't, they go to the sale barn."

He adds the criteria is that the bull falls within the top 5% of the breed for fertility and carcass data to fit their program.

To check carcass quality, the operation feeds out a lot of calves going all the way to the rail with data to see how they perform. Jones stresses, "We don't give up anything. We have friends in the feeding business, and they say the health of Beefmaster is great. If they're feeding in a natural program, they do really well there too, because they just tend to be healthy and vigorous." 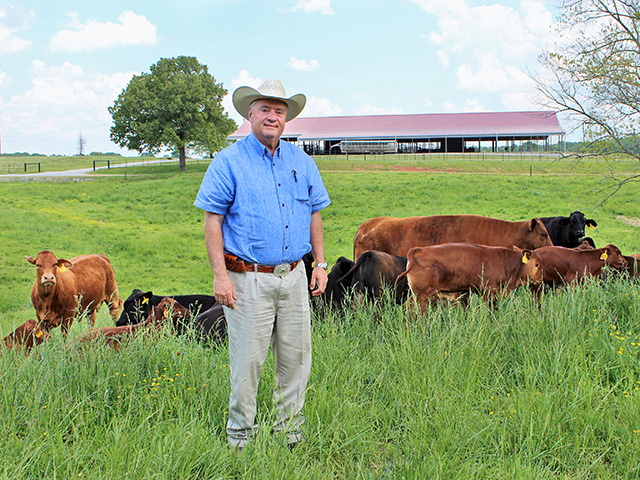