In farming, the saying goes, "There's no such thing as a free lunch." There are a few exceptions to that well-worn cliché, and one may well be the type of hay baler you use and how you bale hay. Nothing makes that difference clearer than a baleage operation.

A study by Penn State College of Agricultural Sciences forage specialist Jessica Williamson found some surprising and simple steps can help boost the value of baleage and reduce handling headaches.

Baleage is growing in popularity because it allows producers to put up forages with higher moisture contents than a traditional haying operation would consider. Baleage is simply a fermented forage with high nutritional values.

Specific steps need to be taken when harvesting for baleage to maintain optimum quality. One of the keys is blocking as much oxygen as possible out of the bale. That means a denser bale is better. In addition, the higher the density, the lower the pH and sugar content of the fermented bale.

Williamson started with the basic question of which baler would create the densest bales. She compared four brands, running them side by side in the same hayfield. Large round bales were made. All the pastures were mowed the same day, followed by the same types of rakes and were pulled by the same brand tractors. The only variable was the baler.

Balers were set at maximum density, traveling at three different speeds--4, 8 and 12 mph. Bales were wrapped within four hours of baling in a minimum of 6 mils of wrap per bale. This ensured the elimination of oxygen and an internal temperature for the bales below 120ËšF. Out of four leading brands, the New Holland Roll-Belt round baler created the densest bales.

Daniel Valen, director of product marketing for New Holland, notes the company partnered with Penn State on this third-party test and found that its baler produced up to 39% higher bale density than the leading competition. Also tested in the study were balers by John Deere, Kubota and Vermeer.

Valen notes return on investment comes into play when bale density comes in at these levels.

"If you put more hay in the same size bale, you don't use as much net or silage wrap to hold that together," he explains. "You also have less air in that bale, and if you're making silage that is better because oxygen is bad for fermentation. The denser the bale, the better the fermentation."

That higher-quality hay, he adds, means there's less waste because the producer has more time to feed the hay before it goes bad. Lastly, from a purely logistical standpoint, more hay in fewer bales means you can get more on a trailer and maximize efficiencies in hauling and feeding. He notes 7.5 to 9.5 pounds per cubic foot (on a dry matter adjusted basis) is a good density when harvesting for baleage.

Moisture levels should have some bearing on how much bale wrap is used when harvesting for baleage. Williamson reports they found optimal moisture for baleage is 45 to 60%. At those levels, it's recommended producers wrap bales with at least six layers of 1-mil polyethylene plastic film. For moisture levels below 30% and up to 45%, it's recommended two more layers of wrap be added to ensure oxygen exclusion. When levels are 60 to 70%, it is also advised to add at least two more layers of wrap. If moisture levels are more than 70%, the study reported conditions were considered too wet for proper fermentation, and baleage production was not recommended until forages dried further.

Timing is everything when harvesting for baleage. As forages mature, nutritional quality declines. Williamson recommends harvesting at the correct stage of maturity based on class of livestock the feed will go to. Harvesting earlier in the growth period will mean higher quality, but if yield is more of a priority, harvesting later in the growth stage may be the best choice.

It's important to wrap bales as soon after baling as possible, because quality begins to decline quickly. The goal is to ensure the internal bale temperature doesn't exceed 120ËšF. This is done by keeping oxygen out of the bale, initiating fermentation. Six to eight wraps are optimal in most cases. Total acid production (lactic and acetic) is higher in bales with greater density. This helps stabilize forages and improves quality and feeding value of the fermented forage.

Bunk life also increases with bale density. The higher the bale density, the longer the forage can be in a feeder without spoiling or becoming unfit for livestock. Baleage is higher in protein and, in most cases, is considered more palatable to livestock, meaning there's less overall waste.

At the end of the day, what works for each individual operation comes down to penciling out the economics.

"The challenge is profitability today," Valen adds. "When I was a kid growing up on a dairy farm, it was pretty easy to make money. Today, you have to maximize the bottom line. The next time you buy a baler, it can be another piece of equipment, it can be overhead or it can be an investment opportunity."

Valen says in today's market, a $50,000 baler that will maximize efficiency over 500 acres of hay each year can pay for itself in improved bale density in one year. 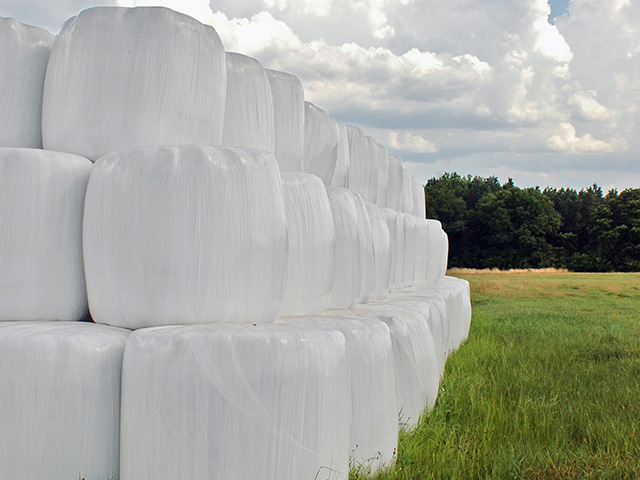