Myles Gardner believes bread-and-butter jobs make the biggest difference when it comes to building a cattle operation. It's a seasoned philosophy for a 29-year-old. It's also proving itself on a daily basis.

"Be ambitious, and do what other people don't want to do," this southeastern Montana rancher advocates. "It's hard to make money at something if everyone else is trying to make money doing the same thing."

So, Gardner thinks about all the things he hears producers say they don't like to do—things like calving heifers, building a fence, maintaining roads, doing mechanical work or guiding hunters. He uses those jobs to help him expand his own cattle herd and purchase ranchland.

"Currently, I gross nearly as much income from side jobs as I do from my own cattle," he says. "We do whatever it takes to make ends meet."

That doesn't mean just making a profit; it means building a successful business by thinking outside of the traditional ranching box.

"When I was a little boy, I went out with Dad every day I could. I liked being a part of absolutely everything on the ranch," Gardner recalls.

So, as he works to build his own ranch, he looks to fill niches within about a hundred miles of his family's operation, in Broadus, Montana. Among his most important enterprises are those helping other ranchers with fencing, cattle-breeding and calving. He also does jobs like maintaining dirt roads, backfilling water pipelines and plowing snow for local ranchers using his family's road grader. But, it's the fencing that set him on the path to growth.

"I couldn't be a rancher without the fencing business, as that has become one of my most important income sources," he says. "We're keeping busy throughout the year as this part of the business continues to grow."

Gardner estimates he and two hired hands annually build 25 to 50 miles of barbed-wire fencing. This typically involves tearing out old fence first. They also construct about five miles of new corral fencing for customers every year.

"I could see the demand for this work in our area. I also wanted a skid-steer loader and other equipment for our ranch. Fencing was a good way to pay it off," says Gardner, who notes the fencing side of the business depends on reputation and charging a fair price.

"You show up when you say you're going to show up, you do a good job, and you get done on schedule," he says. And, fortunately for Gardner, he enjoys fencing. "I really like to step back at the end of the day and look at the progress we made. Plus, I like switching things up all of the time. That's what makes ranch work enjoyable for me and my employees."

While working for other ranchers fencing, Gardner learned there was a need for dependable help to calve heifers. He knew plenty about calving heifers, and he also wanted to build a nice barn for his operation.

"I figured I could help others and pay off the barn at the same time," says Gardner, who now calves 200 to 500 heifers a year for area producers.

It was a natural progression then to move into the artificial insemination (AI) side of the cattle business. At one point, Gardner was artificially inseminating 7,000 to 10,000 heifers each year for area ranchers. He cut this back to 1,500 to 2,000, realizing he may have been stretching himself a little thin. "I just got too busy with everything else I was trying to do," he says.

Along with the ranching jobs, Gardner diversified into a popular venue, guiding hunts for elk, deer and antelope in the area. He works with Gardner Ranch Outfitters, a side business his father started in the 1980s, based at Broadus.

"Most of our hunters come from Pennsylvania, and it's nice to see Montana's wide open country through their eyes," says the young Gardner, who notes that while he's guiding archery and rifle hunters each fall, his hired hands oversee ranch operations.

What has all of this work and entrepreneurial spirit gained for Gardner? Simply put, it has allowed him to expand his own cattle operation. He now owns a commercial herd of 150 Black Angus-Gelbvieh cross mother cows. Each year, he purchases up to 300 high-quality heifer calves and either breeds the calves with bulls or uses AI, depending on the wishes of clients. He typically sells the pairs about 18 months later.

"If the market is not there for the pairs, I hang onto them another year and find buyers for bred 3-year-olds in addition to selling the calves separately," he notes. "You are risking the market, plus it takes a lot of grass and hay to make it work."

He recalls: "One year, I had to hang on to 150 head until they were 4-year-olds. You need a banker who understands and believes in your program."

His hard work has also allowed him to have the resources to purchase land. In 2012, at age 23, he bought 2,000 acres of deeded rangeland adjacent to the ranch owned by his parents. The transaction came with about 1,000 acres of Bureau of Land Management and state lease lands. He financed the deal with a USDA beginning farmer and rancher loan, a bank loan and his own cash. Concerning the latter, he says, "When I was in 4-H and high school, I raised and sold a lot of my own cattle. I wanted to go out and buy stuff with that money, but Mom and Dad made me save almost every penny. Looking back, I am very happy they did that."

Gardner also leases about 7,000 acres of land from a neighbor, where he runs 300 yearlings. And, in late 2018, he started a journey to eventually acquire the 16,000-acre ranch his family began 102 years ago. So, his story isn't just about hard work; it's also about that often touchy subject of estate planning. Like everything else, Gardner met the challenge head-on.

"Many months ago, my parents and I sat down at the kitchen table and started talking about my future on the ranch," says Gardner, who, with partner, Jayme Gaskill, has a 1-year-old daughter, Harper.

"I made my first payment to Mom and Dad, following up on something I've always wanted to do," he says proudly. "I love being out in the country, and I love everything associated with ranch work." 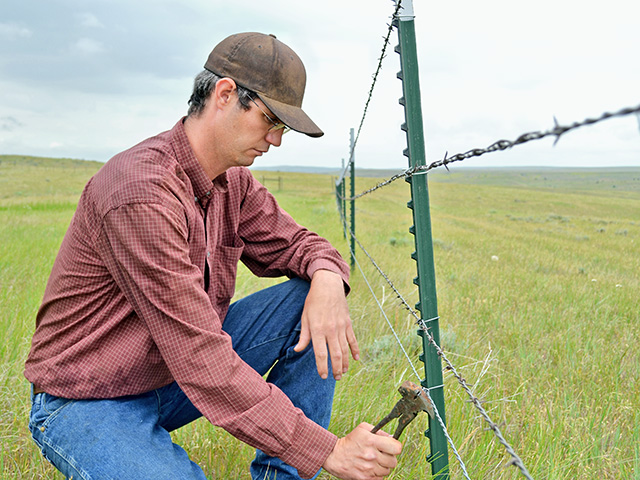