Good bull and heifer development is always intentional. It's time-consuming, expensive and, in the end, it's hard to know when to let go of an animal and when to keep it. Raising replacement cattle is both art and science, but Brad Barrett says it's also got to be a passion.

This Normangee, Texas, cattleman has built a business seedstock producers turn to for help through that last, important phase of development. His system and feeding protocol focuses on getting heifers and bulls ready to return home for breeding, or to sell in one of the state's big livestock auctions.

"We say we are a full-service cattle operation, that there's no job too big or too small," says Barrett of the family's B&B Cattle Company. The operation got off the ground in 2004 as a bull-development center. Today, Barrett still develops a lot of bulls, but as the years have gone by, more of his work is developing heifers and reconditioning mature bulls in the off-season. While he once ran 300 to 400 bulls at a time, out of the 400 head he had this fall, 280 were heifers. On the whole, he was developing cattle from about 30 different producers.

"In Texas, September is the time of year when it starts to get dry, and for many producers, there's nowhere to feed and keep these good replacements. In the past, they might have gone into a drylot. We give them an option," Barrett says. "This is not a feedyard environment; it's 125 acres where everything is on grass traps, except the mature bulls. That encourages movement, and it keeps them in the right body condition they need to be in to breed when they leave here," he explains.

Movement is important, Barrett stresses, because cattle need to move to develop structure as they grow. He describes his program as a "slow-growth operation," saying they aren't about pushing cattle. Feed, water and shade are strategically placed at B&B to encourage frequent eating out of bulk feeders and traveling.

When it comes to heifer development, a common problem Barrett sees is overconditioning. This creates long-term problems. Too much fat, especially internally, impacts milk production and conception rates. "A lot of producers like that we grow them slow," he says. "It's fast enough that they put good weight on, but we're not blowing them up to the point they can't be bred."

Most heifers come to Barrett's operation around weaning age, some as yearlings. He prefers to take them 30 days postweaning because their stress level is lower. He looks for average daily gains (ADG) of 1.5 to 2 pounds. Genetics govern that to some degree.

"Right now, we are feeding out a lot of Brahman cattle, and if they grow too fast, you may see structure issues, like founder and blown-out hocks. So, it's really important to pace these gains," he says.

One key to the program's success is a good ration with 28 to 30% quality roughage. All feed is pelleted, which helps with consumption and reduces waste. Barrett has a 35- to 40-head minimum for each paddock or pen. If a producer brings fewer, they are commingled.

Rations are very similar. No hay is fed. Barrett says the pellets are a complete ration. Cattle also graze forages that include bermuda- and ryegrass in the winter.

"Because of the roughage content, these heifers, when they mature, can easily go to grass, start eating and continue to grow while maintaining body condition. Most of them will never see grain again once they go home. They are going to grass. And, we prepare them to excel on that," Barrett explains.

Because they've not been fed some hot ration, they are nice and slick, but not overdone, he adds. "We like to send them home with a body condition [BC] of a 5 or a 6," Barrett says, adding that those heifers intended for auction may edge up a little closer to a 7 BC presale.

"Clients will tell you they don't want them fat, but they also want to see a little shine on them, so they know where their money is going. Heifers that are a little higher on body condition will always sell better at a public auction," he says.

Heifers stay at B&B until they are ready to breed. At that point, most owners pick them up and take them home. A few have Barrett handle estrus synchronization and getting heifers artificially inseminated. He has a local technician he calls when the heifers are ready. He also does some recip management, in which case cows are with him around 45 days. He synchronizes and watches for heats. When they're ready, he takes them to Trans Ova Genetics, where the embryos are transferred. He'll watch the recips 30 days after the transfer to see if any come back into heat.

Bulls are a pain. Barrett admits it and says his clients complain about the torn fences and holes in pastures that are a part of keeping bulls. It's not a problem at B&B. The place was built for it.

The facilities are intended to handle both mature bulls and those being developed. The business largely started as a place for producers to leave mature bulls during the off-season, where they wouldn't lose condition and would be ready to pick up when the breeding season started. This let them avoid having a bull in with the herd 365 days a year, creating controlled breeding seasons.

"They are like having 200 teenage boys around tearing things up," he laughs. "We develop them, and we handle them a bunch. I'm told they are gentler after we've developed them. It's because we handle everything here slow and easy. There's no roping, no being rough. Our goal is to keep stress levels down. It helps with disposition, and it sure does help with gains, too. Low stress means better growth."

Data collected on bulls includes ADGs, yearling weights, scrotal circumferences, hip heights, rib-eye areas, rib/rump fat thickness, percent intramuscular fat and weight per day of age. Prior to sale or pickup, bulls are verified fertile and sound, and have a health certificate from a veterinarian.

The protocol as animals come to B&B is for all of them to be wormed, treated for flies and lice, vaccinated with a modified live respiratory viral, TSV-2 and a clostridial eight-way. All animals are ear-tagged and tested for bovine viral diarrhea (BVD). If they aren't branded or tattooed, Barrett does that, as well. Newcomers are quarantined for a week.

Bulls and heifers are weighed every 30 to 45 days, with reports going out to owners. Any animal that isn't gaining as it should be can be spotted early. Sometimes, the owner will decide to sell that animal rather than continue to put money into its development.

"It can really save you money to know which ones are performing and which aren't," Barrett says. "Sometimes, you just have to send one to the barn and focus on the ones that are doing better. I don't want anyone to think I'm just feeding something to make money. I'm a cow man first and a businessman second. If it were my cow or my bull, I'd want to know sooner rather than later."

Because Barrett lives where the cattle facilities are, and he sees the animals everyday, he's quick to respond to problems. Owners are welcome to visit anytime, he says, adding he's got an open-door policy. "We don't have anything to hide here. The guy that just likes to drop in, that's fine. But, truthfully, whether you see your animals every week or once a year, you'll know if I'm doing my job. All you have to do is look at that animal's body condition. It's all written right there."

This fall, Barrett says most of his cattle are out of Texas and Louisiana. Sometimes, he works with clients from other parts of the country helping to acclimate their animals prior to sales in the state. He works primarily with three sales each year: the Texas Angus Association bull and female sale, at the Fort Worth Livestock Show; and the all-breed bull and female sales, at both the San Antonio Stock Show and the Houston Livestock Show.

"A lot of my producers aren't full-time, so we try to be a turnkey type business for them. They can't take three days off work and go to a bull sale, but I will go for them and divide my expenses between all of the bulls I take," Barrett notes. "That way, if they can take one day and come to the show, they can just enjoy the sale."

Asked if he has any cattle of his own, Barrett laughs and says he might be able to lay claim on about four out of the 24 head they own. "The rest really belong to my sons, Nathan and Travis," he says. "They have been showing cattle since they were old enough to get into the ring. That's their college account. I don't charge them for the feed, but they work here everyday. Whatever we do, they are a part of it. That's what my dad did for me, and that's what I'm doing for them."

In addition to his sons, Barrett says wife, Jana, is also a big part of B&B. "This is a family business, and it takes all of us to make this a success," he says.

"Jana does the marketing for the business and makes sure we are on point. She also works full-time at Texas's 4-H office at [Texas] A&M."

Barrett laughs, "There's a saying, behind every good rancher is a wife who works in town. I know, in our case, that's true. It takes all of us to make this operation run." 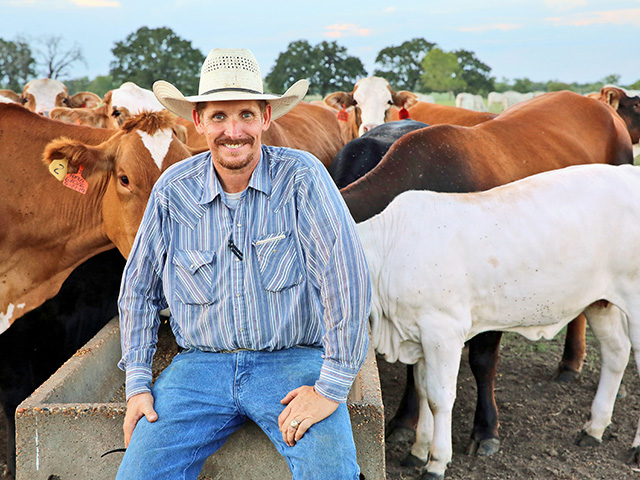